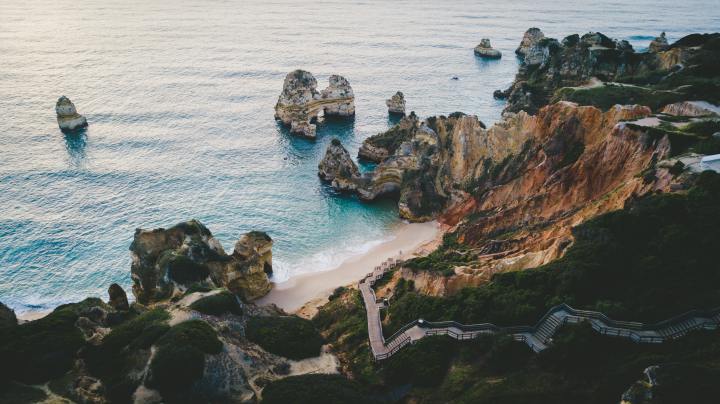 Lagos is one of the most popular places to visit in the Algarve region of Portugal. It is famous for having dreamy beaches with golden sand and crystal clear waters as well as the impressive cliffs that look out onto the Atlantic Ocean.

This is the ultimate guide to visiting Lagos including where to stay, things to do, how to get there and much more. This article will give you all the information that you need when visiting Lagos.

Why You Should Visit Lagos

The Algarve as a whole is one of the most stunning places to visit in Europe. There are many amazing towns in this region that have so much to offer such as Albufeira, Tavira, Vilamoura and many more.

Lagos is one of the most picturesque towns in Europe. It’s located right on the coast and has some stunning spots.

If photography is your thing or you just want some travel inspiration, check out my guide to the top 15 best photo spots in Lagos. You won’t be disappointed.

Lagos, originally Lacóbriga, has over 2,000 years of history. Over the years it has seen much change, having been taken over by the Carthaginians, the Romans and the Moors.

The African Moors took over Lagos in the 8th century. Many of the structures built during this time still remain today including the old fortified walls and the Castle of Lagos. In the 13th century, Lagos was taken back over by the Portuguese.

Lagos is also the home of the oldest church in the Algarve,  São João Baptista, built in 1174.

Over the years, Lagos has served as an important town often being known as a major centre from which to explore the seas. Henry the Navigator set sail from Lagos on many important expeditions to expand Portugal’s empire.

Due to its location and economic importance, in 1577 it was named the capital of the Algarve.

During darker times, Lagos was the site of Europe’s largest slave market – the market still remains but today is a museum and art gallery. Historically, slaves were brought here from Africa and distributed throughout Europe.

Where To Stay When Visiting Lagos

There are many amazing places to stay in Lagos. From the historic old down to the more upmarket marina.

One of the best places to stay is within the historic old town itself, close to all the action and all of the town’s restaurants and bars. The town has tons of history, cobbled streets and hundreds of places to eat and drink.

If you’re looking for something a little more upmarket, then why not stay by the marina. You’ll still find a good variety of restaurants/bars here and it is also within close walking distance to the old town and train station.

If you’re planning on spending a lot of time by the beach, then you can choose a hotel close to your favourite beach. Meia Praia is a great choice as this beach is the longest in the Algarve.

As well as hotels, make sure you check out airbnb.com as they have excellent options. They offer both accommodation and experiences all at reasonable prices! We often stay in airbnbs when we travel and it’s super easy to use.

For more information, I have a complete guide on the different areas of Lagos which includes hotel recommendations for each area.

The beaches in Lagos are often considered to be some of the best in the whole world.

Beaches such as Praia Dona Ana and Praia do Camilo are world famous. You can expect golden sand and crystal clear waters. These beaches are surrounded by stunning cliffs and often have long staircases leading down to the beachfront.

These beaches are beautiful however can get quite crowded due to being quite small and very famous.

An alternative is Meia Praia – this is the longest beach in Lagos at 4.5km. It has long stretches of sand with plenty of room for everyone so you’ll never have to fight for a spot.

One of my favourite things to do in Lagos is take a stroll around sunset along the beaches. The sunsets in Lagos are the best I’ve ever seen, they are just magical!

For more information (as there are many glorious beaches not discussed here), I have written a complete guide of all of Lagos’s beaches including some hidden beaches you won’t have heard of!

As well as world famous beaches, Lagos actually has lots of other fun things to do to pass the time.

One of Lagos’s most famous sites is Ponta da Piedade. This is a collection of rock formations that, over thousands of years, have formed sea arches, caves & grottos. One of the best things to do is hire a kayak and explore the caves/grottoes. You can also join a boat tour if you’d prefer.

Check out my complete guide to Ponta da Piedade for more information on visiting including the best ways to see it.

There’s plenty of opportunity to get out onto the water in Lagos. Whether it be kayaking, stand-up paddle boarding, or even a boat tour!

There are also many other impressive places you can visit in the Algarve that aren’t too far from Lagos. Towns such as Sagres, which is the most south-westerly point of Europe, and Silves are not too far away.

Check out my guide to the best day trips from Lagos for more ideas, information on why you should visit and how to get there.

Another of the Algarve’s most famous sites is the Benagil cave. This natural wonder is not too far from Lagos and also makes a perfect day trip or activity.

This sea cave is really impressive and is definitely a must see if you’re staying in Lagos. You can explore it on kayak tour.

If you’re not sure how to get there, check out my guide on how to get to Benagil Cave from Lagos.

How To Get There

Lagos is located on the southern coast of Portugal. The closest airport is Faro Airport (FAO) which sits 91km (1 hour drive) away from Lagos. Many travellers choose to fly here and it is quite easy to travel to Lagos from the airport by bus, train or taxi.

Some travellers travel from other parts of Portugal such as Lisbon or Porto. Taking a train or bus tends to be the best way to travel to Lagos from these cities.

I have a range of guides which give detailed step-by-step guides on travelling to Lagos including prices and links to timetables:

How To Get To Lagos From Faro Airport

How To Get To Lagos From Lisbon

How To Get To Lagos From Porto

When Is Best To Visit Lagos/Weather

The best time to visit is between June and September if you’re after hot sun. Check out the table below for average temperatures year round.

Something to note is that it does get really windy in Lagos, especially during the evenings. This is mainly due to it being a coastal town. This does mean that sometimes it can feel a little chilly in the evenings so make sure you bring a jumper/sweater even if you’re visiting during the summer.

The driest month is August – Lagos doesn’t usually get any rain at all during this month.

The wettest month is November but even during this month you can only expect 2 days of rainfall.

The winter can also be a good time to visit Lagos as the weather is still warm, prices are lower and the main attractions are much less busy than in the summer. You could get yourself a real bargain during the winter.

Where To Eat in Lagos

Lagos has a fantastic range of restaurants offering a range of international cuisines as well as many Portuguese restaurants. There is definitely something for everyone here.

Most of the restaurants are located in the old town where you’ll find the biggest variety but there are many other restaurants in other areas of Lagos such as by the marina.

Maharaja Tasty Indian: they serve the best Indian food in town, make sure you try their garlic naan and bombay potatoes!

My Sushi: this place is an all you can eat sushi restaurant offering fresh Japanese cuisine that is super delicious! It is quite popular so it’s probably best to book ahead.

There are also plenty of places where you can try some traditional Portuguese dishes. Some of the best places include Tasca Jota or Restaurante Calhou.

Thanks for reading this ultimate travel guide to Lagos, Portugal. If you’re thinking of visiting Lagos, I hope this was helpful! Lagos is a wonderful holiday destination and you’re bound to have lots of fun.