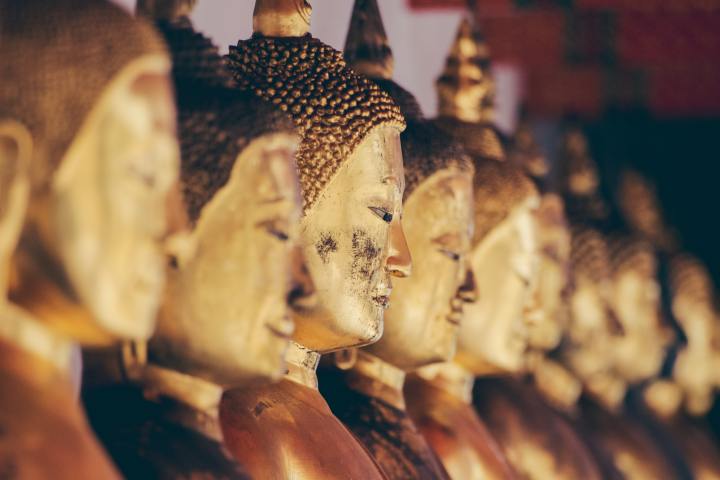 Bangkok is always busy – whatever time of year you visit. However, some times of year are less busy and each month has something different to offer, depending on what you are looking for. Read on to find out what time of year has the best weather and what festivities are happening in Bangkok!

The best weather is from December to March. If you are planning to visit the Thai islands and beaches then this would be the best time to go for perfect blue skies and sunny days. This is dry season so you won’t get any rain!

Rainy season is from May to October so expect short bursts of intense rain during these times. Thailand is still really hot (average 30°C) and can be very humid. This may be a good time to visit if you’re on a budget as you can get some really great hotel deals as this is low season. The city is also a lot less busy at this time. I actually visited during August and was pleasantly surprised as we didn’t get much rain.

The rainiest months are September and October so avoid these if you really want dry weather.

Here are the average temperatures in the day time:

New Years Day – New Years is a great time to visit Bangkok as there are so many festivities going on! Bring in the new year in the crazy, hectic, incredible city that is Bangkok.

Chinese New Year – This is celebrated at the end of January and start of February. It is a great time to visit Chinatown where there will be lots of celebrations including exciting parades with lots of dragons and firecrackers.

Makha Bucha Day – This is a public holiday and important Buddhist festival. It celebrates the day that Buddha gave an important sermon to 1,250 followers. Bangkok celebrates this day with candlelight processions around the temples. You will find that bars will be closed on this day.

Bangkok International Fashion Week – If you love fashion then you can’t miss Fashion Week where lots of products are showcased! Check out a runway show.

Songkran – This is the Thai New Year and is a fantastic time to visit Bangkok. Lots of places will close down for 3 days from the 13th-16th. If you’re in Bangkok, prepare to get wet as celebrations for the New Year include young people having massive water fights in the street! Watch out for a water gun.

Chakri Day – On April 6, this day celebrates the founding of the Chakri Dynasty (from which the current royal family originated).

Visakha Bucha – This is the holiest Buddhist holiday as it commemorates the 3 important events that happened to Buddha on May 29th: he was born on this day, he achieved The Enlightenment and he passed away on this day. Many Buddhists visit the temple on this holiday and take part in processions.

Amazing Thailand Grand Sale – This sale starts in June and allows shoppers to grab some great deals. If you love shopping, then this is the best time to visit. It lasts until August time and you will get some fantastic discounts on clothes, jewellery, tech and more.

Asahna Bucha – This national holiday in Thailand commemorates the day that Buddha preached his first sermon. Buddhist people celebrate this day with ceremonies in the temples.

Khao Pansa – This marks the beginning of Buddhist Lent. Lots of bright, colourful festivities happen on this day.

The King’s Birthday – The King’s birthday is celebrated on July 28th with a display of fireworks at the Grand Palace. It recently moved from December 5th after the late king passed away.

Wan Awk Phansa – This day marks the end of Buddhist Lent. There is usually a royal ceremony at Wat Arun. No alcohol will be served in the city.

Chulalongkorn Day – This day on October 23rd is where the Thai people celebrate the life and reign of King Chulalongkorn. It is the anniversary of his death and is a public holiday.

Loy Krathong Festival – This is a beautiful festival in Bangkok where Thai people buy or make a krathong. A krathong is a small boat made from banana tree and leaves with flowers and a candle inside. Thai people go to lakes and rivers and release their krathongs into the water to pay respects to the goddess of water. It is very picturesque.

Christmas Day – As Christmas is a Christian holiday not many people celebrate it in Thailand, however, there are still some festivities and many malls in Bangkok have Christmas decorations.

New Year’s Eve – There are many festivities going on in Bangkok to bring in the new year. You can watch the New Year countdown in Central World Square, attend a wild party at a club or take a private river cruises down the Chao Praya River. They have an incredible firework display to mark the New Year.