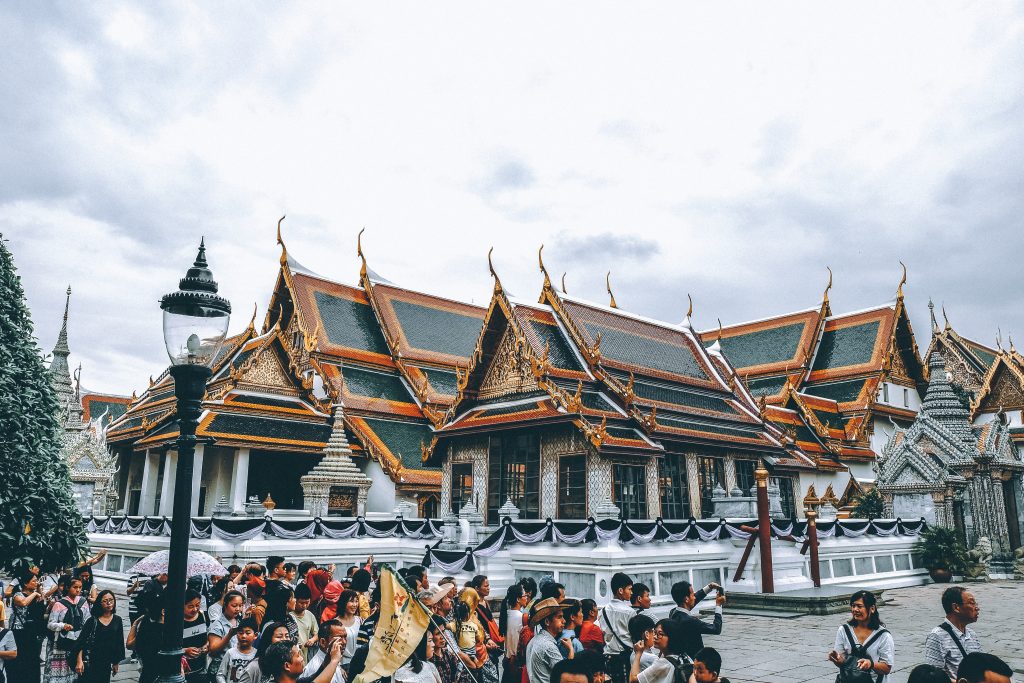 Situated on the banks of the Chao Phraya River, the Grand Palace is one of Bangkok’s most famous landmarks. With its intricate details and mesmerising architecture, it is definitely a site not to miss! This palace complex not only features the Grand Palace itself but many other halls, buildings, gardens, courtyards and, the Temple of the Emerald Buddha. You will marvel at this unique look into beautiful Thai craftmanship that really showcases Thai history and culture.

The Grand Palace is a very sacred site in Thailand. Once upon a time, it used to be home to the Thai King, his court and the government. This ended in 1925, however, today it is still used for official events and ceremonies.

The palace complex is made up of several sites which are divided into 2 main areas: Wat Phra Kaew and the royal residences. The royal residences are then divided up into further areas: the Outer Court, the Middle Court and the Inner court.

One of the most impressive and popular areas inside the Grand Palace complex is Wat Phra Kaew, also known as, the Temple of the Emerald Buddha. This Buddhist temple contains the famous Emerald Buddha which is carved out into a meditating position from a single block of jade. Each season the King of Thailand will take part in an important ritual where he will change the Buddha’s robes.

The Outer Court of the Palace is near to the entrance. This is the location of several state offices. The Middle Court contains some magnificent rooms, including 2 very detailed throne halls. Be sure to take a look at these royal reception halls which have exquisite interiors and today are used for important royal ceremonies such as coronations. They have more of a European style. The Inner Court is actually closed off to the public, so you won’t be able to see it. Historically, the inner court was a female-only zone and the king was the only male allowed to visit however it is no longer a residence.

The Grand Palace contains lots of fascinating Thai history and culture. To learn more about the palace’s restoration, you can take a look at the museum also inside the complex. This museum contains lots of information about the restoration of the Grand Palace as well as many models and images. Be aware that, as one of Thailand’s most popular tourist spots, it can get very crowded and busy. Try to visit early morning when it will be quieter.

Cost: Entry ticket is 500 baht. You can also rent an audio tour for an additional 200 baht.

Time: Suggested time is 2 hours as there is lots to look at. Arrive early at opening time to beat the crowds.

Dress Code: Strict dress code. Both men and women should wear full, long trousers (or skirt) and shirts/tops with sleeves. Also avoid bare feet (no sandals, must wear socks). Also avoid tight fit clothing. If you do not come properly dressed you can hire clothes at the entrance to cover up (usually a refundable 200 baht deposit). The dress code is strictly enforced here as this is a very sacred site.

How to get there: Take the BTS Skytrain to Saphan Taksin Station. From here take a River Express boat to Tha Chang Pier. It is a short walk from here to the entrance.

Scams: Ignore any taxi drivers or tuk-tuk drivers who tell you the Grand Palace is closed. It most probably isn’t. They are just trying to take you elsewhere as they will get a commission for taking you to certain shops.

Another scam is that street sellers may tell you that your skirt is too short in order to sell you a sarong/clothes. If you are unsure, go to the official grand palace entrance and if it is too short, they will give you a sarong for free anyway.

Some people will also try to sell overpriced tours/guides. If you want a tour, stick to hiring only official guides from inside the Grand Palace itself.

The Grand Palace was built in 1782 by order of Rama I. Rama I was the founder of the Chakri Dynasty and he decided to move the capital of Thailand from Thonburi (on the west side of the Chao Phraya River) to Bangkok (on the east side).

The Palace was originally built out of wood in order to save money. However, over time bricks were taken from the ruins of Ayutthaya and taken down the Chao Phraya River to build the Grand Palace into what it is today. Over the years, many other buildings were added by successive kings.

Rama I was able to move into his new residence just 2 months after construction started, this was due to them using the exact floor plan and layout of the Ayutthaya Grand Palace to build the new palace. This saved time and money.

The Grand Palace was the home of Thai Kings for 150 years. It was also the site of the government. This all ended in 1925 when the Thai Kings stopped living here.

The Temple of the Emerald Buddha is a popular site here. This dates back to the 14th century.