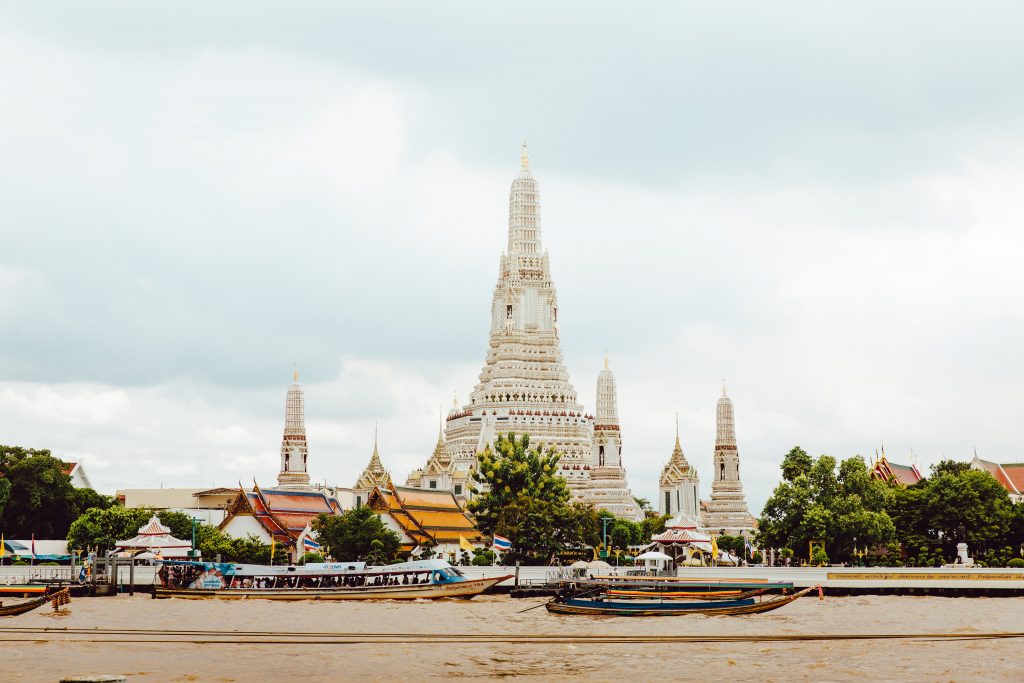 An iconic symbol of Bangkok, Wat Arun is a glorious Buddhist temple situated on the Thonburi west bank of the Chao Phraya River. Standing majestically along the riverside, this icon glows in the morning as the light hits its many spires. One of the best viewing options is to go to the east side of the river at sunset or sunrise.

Wat Arun is also known as the ‘temple of the dawn’. Its main spire is 70 metres high and is decorated with Chinese porcelain and coloured glass which come together to form intricate patterns. If you wish, you can climb up the central spire, however, be warned that the steps are steep. Despite this, you get a great view of the river from the highest point.

As more than 95% of Thai people are Buddhist, this temple is actually a very important place of worship for Buddhists. It is truly an iconic symbol of Thailand, even featuring on the 10 baht coin. That along with its truly unique architecture makes it a very popular site for tourists. It is actually one of the most visited sites in Thailand.

Dress code: Dress appropriately – you must cover your knees and shoulders (both male and female). If you don’t you will have to buy a cover-up near the entrance.

How to get there: If you are on the east side of the river, take a boat across the river from the Grand Palace/Wat Pho. This is the easiest and cheapest way to get to Wat Arun. There are many ferries that will take you across the river for 3 baht.

If you are travelling by BTS, arrive at Saphan Taskin station (Silom Line). You might have to transfer at Siam station (exit 2) depending on which line you’re on. From here get a Chao Phraya Express Boat to take you to N8 Tha Tien Pier (the stop for Wat Pho). You can then get the ferry to the other side of the river to visit Wat Pho.

A Buddhist temple has existed on the Wat Arun site since the 17th century during the Ayutthaya Kingdom. Following the fall of this kingdom, King Taksin restored the temple and renamed it Wat Chaeng (the locals still call it this). When he first arrived at the temple, dawn was breaking and so Wat Chaeng actually means ‘temple of the dawn’. King Taksin established a new capital here.

For some time, Wat Arun was in the grounds of the royal palace where it was the royal chapel. It also housed the Emerald Buddha. However, in 1785 this was moved to the Grand Palace by Rama I who moved the palace to the other side of the river. Following this move, the temple was left abandoned until the reign of Rama II.

Rama II began restorations of the temple; these restorations were completed in the reign of Rama III. During this time, the spires of the temple were raised, and Rama III added the porcelain decoration which made Wat Arun what it is today.