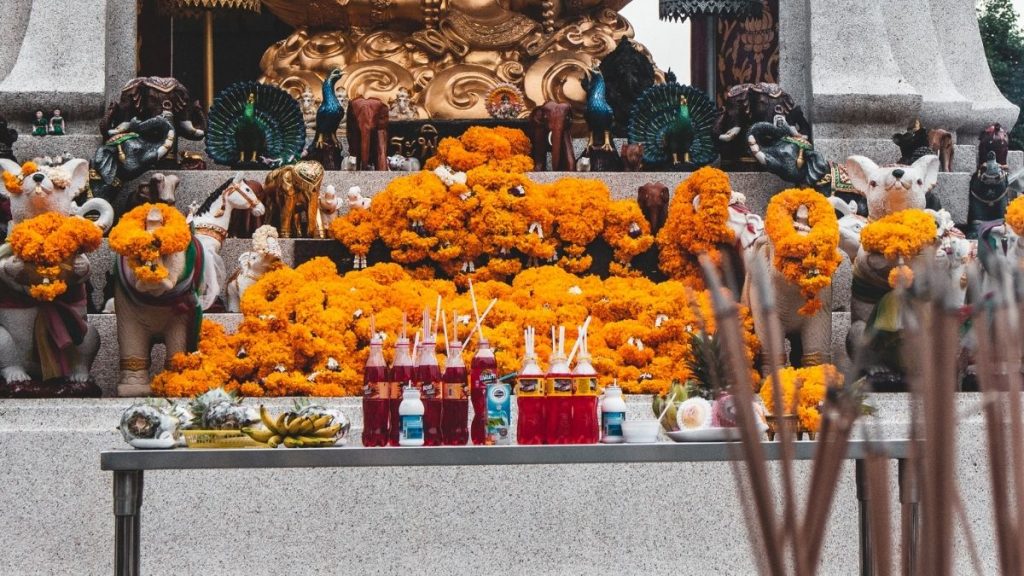 If you’ve ever visited Thailand you may have noticed many open, unconsumed bottles of red Fanta left out at shrines and you may now be wondering why on Earth people leave red Fanta at shrines in Thailand. Well don’t worry, I’ve got you covered.

This post covers the reasons behind this interesting tradition.

Why do people leave red Fanta out at shrines in Thailand?

Firstly, in Thailand it is common to believe in paranormal spirits, as it is in many countries around the world.

The red Fanta bottles that you will see all over Thailand are left at places called spirit houses.

What is a spirit house you may be asking. A spirit house is a type of shrine. They are intended to provide shelter for spirits that otherwise could cause problems for people.

These spirit houses tend to be erected when land is cleared and buildings are built. The spirit houses are built to house the displaced Earth spirit as many Thai people believe that spirits reside in trees and the land itself.

There will be a spirit house in most buildings in Thailand but some are more fancy than others. One of the most famous spirit houses is the Erawan Shrine in Bangkok.

Why do people leave things at spirit houses?

It is a tradition to leave offerings to the spirits at spirit houses every morning.

This is usually in the form of food and drink such as rice, fruit, desserts, coconuts and, to many people’s surprise, red strawberry Fanta. The spirits are said to like sweet things in particular. You’ll also find things like flowers and other small trinkets.

The idea behind these offerings is that friendly spirits will congregate here at the spirit houses and keep evil spirits away. If you treat the spirits well, they will defend the house from evil spirits.

Why do people leave red Fanta?

A very common offering is red strawberry Fanta or Fanta Nam Dang (as it is known in Thailand).

If you’ve visited Thailand, you will see collections of red Fanta bottles everywhere. Many people see this as an unusual and strange thing to leave, and I must admit I was surprised and confused when I first saw this on my first trip to Bangkok.

Many people also place straws in the drinks for the spirits too.

Red Fanta has actually been left in this way for a very long time, decades even.

Many years ago, before red Fanta existed, Thai people used to colour and sweeten water to make it red and leave it for the spirits. Traditionally Thai people have left sweet, red coloured drinks for the spirits and the existence of red Fanta makes this process quicker and easier.

Whilst there is no definitive answer as to why Thai people chose red Fanta as an offering, many people say it is to do with the significance of red.

Another interesting theory is based on the red incense sticks that you may also see left at shrines. These sticks are left inside glasses of water and are coloured with red dye. As the sticks melt, the dye drops into the water tinging it red.

Another pro of red Fanta is that it comes in a glass bottle so it’s unlikely that it will be blown over by the wind.

You will also sometimes see red Fanta alternatives such as Kool-Aid or other cheaper brands but it will always be a sweet, red-coloured drink.

Red Fanta is so popular in fact that Thailand is Fanta’s fourth-largest market in the world and bigger than the USA and China.

Finally, I’d just like to add that whilst at first this may seem like a strange concept, let’s remember that children all over the world are encouraged to leave out milk for Santa Claus and in many countries people believe in the existence of the Easter Bunny that will leave chocolate eggs in your garden.

I hope this post was interesting and explained why people leave red Fanta at shrines in Thailand.