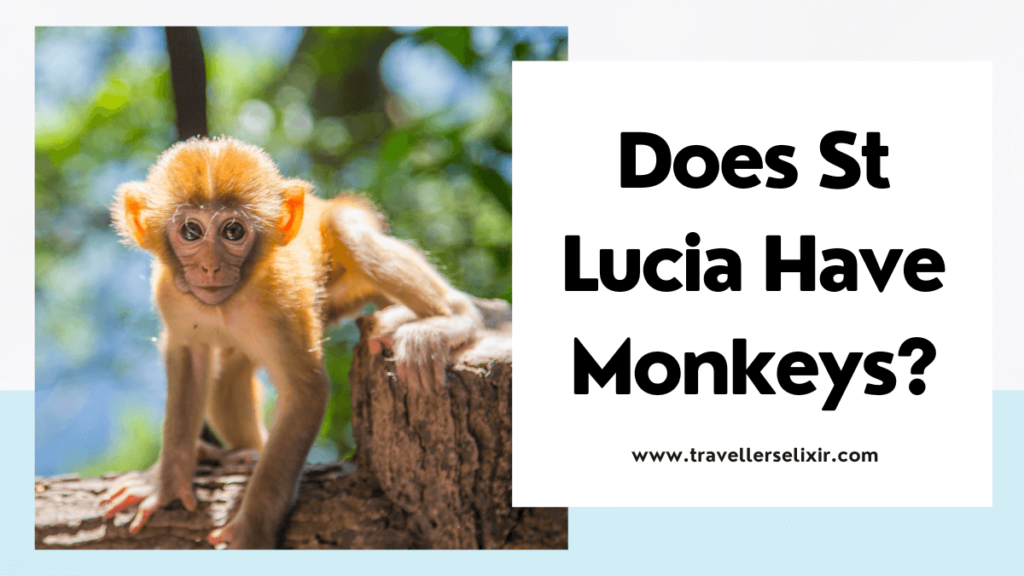 St Lucia in the Caribbean has a lot of different animals for such a small island including birds, mongoose, lizards and more.

But does St Lucia have monkeys?

Let’s find out! This post covers if St Lucia has monkeys, where they came from and what type of monkeys St Lucia has.

Does St Lucia Have Monkeys?

Yes, there are monkeys in St Lucia but they are very uncommon so it’s unlikely that you’ll see one.

The monkey species found in St Lucia are actually an invasive species meaning the government is actively trying to get rid of them.

Several monkeys were spotted in Monchy back in 2020. The monkey species spotted were green monkeys and tufted capuchin monkeys.

These monkeys have been spotted every now and again in St Lucia for the last 10 years however there isn’t an established population.

This means that there is only a small number of monkeys on the island and the Forestry Department believes they live around Monchy in the north.

St Lucia’s Forestry Department is doing everything they can to keep numbers low as these invasive monkey species can have negative effects on the country’s agriculture sector.

The monkeys are known to raid crops and eat farmers produce which can be disastrous for farmers and has the potential to destroy their livelihoods.

The monkeys also pose a threat to biodiversity as they eat lizards and birds and they carry certain diseases that could affect the human population.

These types of monkeys are already established in other nearby countries like St Kitts and Nevis as well as Barbados.

Officials say they are already causing significant problems there and so they don’t want the same thing to happen in St Lucia.

Check out the below video which features a news report all about St Lucia’s monkeys:

How Did The Monkeys Get There?

St Lucia’s Chief Wildlife Officer said that green monkeys first arrived in the Caribbean back in the 17th century during the slave trade era.

They were brought over on the slave ships from countries like The Gambia and Senegal.

However he noted that he believed the monkeys arrived in St Lucia via the illegal pet trade. They likely were brought to St Lucia as pets who then escaped from their owners.

The keeping of exotic animals is actually prohibited in St Lucia and the government strongly discourages it.

There are many animals in St Lucia including various lizards, birds, mongooses, snakes, possums, frogs, rodents and even whales and seals.

Thankfully, there aren’t many dangerous animals in St Lucia but there are a few you need to watch out for.

St Lucia’s fer-de-lance snake is the deadliest snake in the Caribbean. Luckily there are very few of these snakes left in St Lucia and they live in rural areas not frequented by tourists.

Another thing you need to look out for if you’re swimming in the ocean is St Lucia jellyfish.

Thankfully you won’t find any box jellyfish that have the ability to fatally wound you in St Lucia (those are mainly found in Australia and South East Asia).

Some of the jellyfish in St Lucia can give you a painful sting though if you happen to bump into one so keep your eyes peeled.

Other than that you won’t find any dangerous animals in St Lucia.

💡Tip: There are spiders (& tarantulas) in St Lucia but they are uncommon and can’t hurt you. Find out more about St Lucia spiders in my complete guide.

Thanks for reading this guide all about St Lucia monkeys.

Another animal that you may see whilst snorkeling in St Lucia is a nurse shark or a reef shark!

I have an entire guide on sharks in St Lucia for more information on safety but these types of sharks are actually harmless to humans.