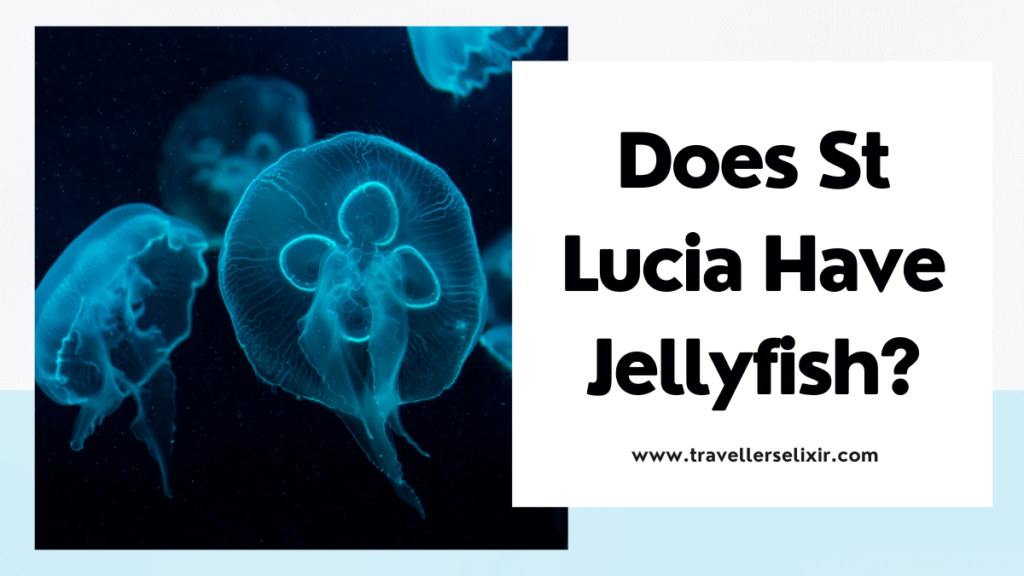 If you’re visiting St Lucia soon then you might be wondering if St Lucia has jellyfish present in the waters surrounding it.

You’re not the only one. Jellyfish have the potential to cause serious harm so it’s worth knowing the facts to ensure you remain safe.

This post tells you everything you need to know about St Lucia jellyfish including the types of jellyfish in St Lucia, if they’re harmful to humans and how to identify them.

Are There Jellyfish in St Lucia?

Yes, several different species of jellyfish have been spotted in the waters around St Lucia however jellyfish stings are extremely rare (especially severe ones).

There are no deadly jellyfish in the waters around St Lucia. In extremely rare cases, people have been stung by jellyfish in St Lucia but most stings are mild.

The majority of tourists have a safe and enjoyable trip so if you’re just visiting St Lucia for a vacation then you have little to worry about when it comes to jellyfish.

Several different species of jellyfish have been found in St Lucia including the following:

Later in this post, I explain in detail how these jellyfish can harm you and how to identify them.

How Common are Jellyfish Stings in St Lucia?

Jellyfish stings in St Lucia are rare but they do happen occasionally whilst swimming in the ocean off of the beaches.

The majority of jellyfish stings that occur in St Lucia are mild. They have, very occasionally, resulted in severe stings and even hospitalization in the most extreme cases.

There have never been any fatal jellyfish stings in St Lucia.

Most jellyfish stings occur in the water however it is still possible to be stung by a jellyfish whilst on the beach.

Occasionally a stranded jellyfish can be found on the sand and they can still sting you even if they are dead.

It’s also worth remembering that jellyfish don’t seek out humans. They will only sting you if you bump into one by accident as they mistake it for an attack.

Does St Lucia Have Box Jellyfish?

Yes, box jellyfish have been recorded in St Lucia.

Box jellyfish are, by far, the most infamous jellyfish in the world with some species able to cause death to humans (extremely rare).

Although box jellyfish can be found around St Lucia, the lethal species cannot be found here.

There are actually 51 different species of box jellyfish and some species possess dangerous venom that can, in some instances, cause death or paralysis.

These lethal types of jellyfish are mainly found in Australia and the Philippines. They have never been sighted in St Lucia so you can put your mind at ease.

There have been several sightings of (non-lethal) box jellyfish in St Lucia including in the waters near the famous Piton mountains.

Although some species of box jellyfish can be dangerous to humans, it’s worth knowing that most species are not harmful (other than a painful sting).

If you happen to see one of these jellyfish whilst out swimming in St Lucia then it’s definitely best to stay away from it just in case.

The mangrove box jellyfish is thought to be pretty harmless due to its small size (although they haven’t been studied extensively so this isn’t certain).

The Bonaire banded box jellyfish is a bit more harmful and their stings could land you in hospital in rare instances.

At a very minimum, a sting from one of these would be really painful and could leave some skin damage.

Here’s what to look out for:

The Bonaire banded box jellyfish is the most harmful type of jellyfish found in St Lucia so if you happen to spot one, don’t go near it.

Other Types of Jellyfish in St Lucia

As well as box jellyfish, there are several other types of jellyfish that have been spotted in St Lucia over the years.

Here’s everything you need to know about each type including if they are harmful and how to identify them.

Moon jellyfish are basically harmless to humans so if you happen to spot one when out swimming, you have nothing to worry about.

According to The Wildlife Trusts, this type of jellyfish doesn’t sting humans.

Moon jellyfish have a translucent bell-shaped head with four purple rings inside of it. You’ll also see short tentacles hanging down from the head.

Fact: Jellyfish are 95% water and have no brain, blood or heart.

These types of jellyfish are named due to the unique way that they rest upside-down with their bell-shaped body resting on the seafloor and their arms extending upwards.

Their bell-shaped body is flattened on the top which allows them to rest comfortably upside-down. The body of the jellyfish continues to pulse at all times, even when resting.

Upside-down jellyfish are capable of stinging humans however most reactions are mild. They can occasionally cause more severe reactions but this is extremely rare.

According to the Australian Museum, you shouldn’t apply vinegar to a sting by an upside-down jellyfish as this could make it worse. Instead use an ice pack.

The Cannonball jellyfish, also known as the cabbagehead jellyfish, is given its name due to its appearance which looks a bit like a cannonball.

This type of jellyfish doesn’t have the long tentacles that are normally associated with jellyfish. Instead it has short arms.

Cannonball jellyfish have large dome-shaped heads that are usually a milky, translucent color with a darker brown rim.

These types of jellyfish can sting humans however this is extremely rare and unlikely even if you brush up against one. The stings themselves are mild and are fairly harmless to humans.

Thimble jellyfish, also known as sea lice, can easily be recognised by their body which has straight sides and is flat on the top.

They are smaller than other jellyfish species, only reaching about one inch in length.

Thimble jellyfish don’t usually sting humans but they can cause a skin condition known as ‘seabather’s eruption’.

This condition occurs when a swimmer comes into contact with the larvae of the thimble jellyfish (essentially baby jellyfish).

The larvae are tiny and are almost invisible to the human eye. They attach to your skin whilst you’re in the ocean.

After you dry off, the larvae die and their undeveloped stinging cells are left on your skin which causes an annoying, itchy rash.

Although this rash is a bit annoying, it isn’t dangerous to your health and the sting itself isn’t painful at all.

These types of jellyfish are quite prevalent in the Caribbean Sea and account for a large portion of the jellyfish stings in the Lesser Antilles region.

White-spotted jellyfish are easily recognised by their round shaped head which is semi-transparent. The head is covered in white dots.

It’s good to know that they are almost completely harmless to humans and if they do sting you it will likely be unnoticeable. At worst you’ll get a mild reaction but nothing serious.

Jellyfish move locations due to tradewinds as well as their natural cycle so they are more prevalent at certain times of the year.

In St Lucia, jellyfish are most prevalent between spring and fall. By November, most jellyfish have left the area.

You’re less likely to see them during the winter months, which luckily coincides with St Lucia’s peak tourist season as the weather during this time is hot and dry.

Seabather’s eruption, which is an itchy rash caused by thimble jellyfish, is most commonly reported during spring and summer.

How to Avoid Jellyfish Stings

Although it can be difficult to avoid jellyfish stings, there are a few things you can do that will drastically reduce your chances of being stung.

What to Do if You’re Stung By a Jellyfish

Here’s exactly what you should do if you’re stung by a jellyfish in St Lucia:

Applying vinegar to the wound is advised for most jellyfish stings (apart from the upside-down jellyfish).

This should be enough to take care of most mild stings.

Ensure you remove any jellyfish stingers that remain on the skin with tweezers. Ensure that you don’t touch them with your bare skin.

If you get seabather’s eruption (the itchy rash caused by thimble jellyfish) then you should get a corticosteroid cream to reduce the itchiness. Antihistamines can also help.

Do not treat the area with urine or alcohol. Although these two remedies are fairly well known, they are not recommended by doctors.

Before you head out into the ocean try to make note of where the nearest medical help can be accessed, so you know where to go if you’re in need of care.

Thanks for reading this post all about if St Lucia has jellyfish.

Although jellyfish can occasionally be found in the waters, it is safe to swim in St Lucia.

In fact, water-based activities are hugely popular in St Lucia. Water sports like snorkeling, kayaking and stand-up paddleboarding are popular. Even surfing is possible in St Lucia.