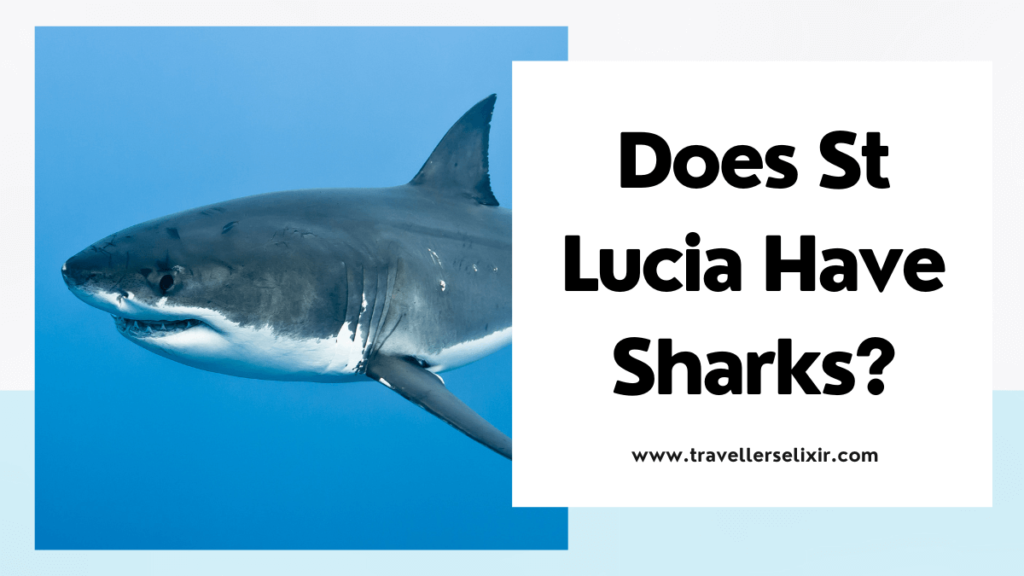 If you’re visiting St Lucia soon then you might be wondering: does St Lucia have sharks?

I was wondering the same thing which is why I put together this handy guide after spending a while researching it.

This post covers if St Lucia has sharks, if it’s safe to swim in the ocean in St Lucia and other things to look out for.

Does St Lucia Have Sharks?

No, St Lucia doesn’t normally have any sharks present in the ocean surrounding it.

One huge fear that many people have when visiting tropical islands like St Lucia is that they may come across a shark whilst swimming in the ocean.

Even worse, they fear that they might come across a bull shark!

❗️ Bull sharks are very aggressive and responsible for the majority of shark attacks on humans.

Here’s what you need to know:

People have been visiting St Lucia for decades and shark sightings are incredibly rare so you can put your mind at ease.

The only sharks that have ever been spotted in St Lucia are small reef sharks and nurse sharks.

These types of sharks are harmless to humans and fairly small so even if you do come across one, you have nothing to worry about.

Even then, it’s incredibly unlikely that you’ll even see one of these sharks. The only people that have ever spotted them have been out diving at super deep depths.

These types of sharks will not be found swimming in the ocean near the shore or anywhere where tourists can be found.

And your chances of seeing a bull shark in St Lucia are almost zero.

It’s highly unlikely that you’ll spot any type of shark though.

There have been no recorded shark attacks in St Lucia.

In 2021, there was an attack on a woman near St Kitts & Nevis which led to the government of St Lucia to release a statement asking people to be vigilant for sharks.

In the statement, they said that they were aware of recent shark sightings within the Caribbean region and asked people to report any shark sightings.

They did note that all of the sightings so far have been recorded in northern Caribbean regions (which St Lucia doesn’t belong to) but still advised people to be careful.

It’s also worth noting that many other Caribbean countries did the exact same thing.

Can You Swim in the Sea in St Lucia?

Yes, it is perfectly safe to swim in the sea in St Lucia however there are some things you should be aware of depending on your swimming abilities.

There are a range of fantastic water sports available in St Lucia including snorkeling, kayaking, jet skiing, parasailing, stand up paddleboarding and more.

If you’re worried about currents then stick to swimming on the Caribbean side of the island (rather than the Atlantic side).

The Atlantic side tends to get stronger currents which are great for surfers however anyone who isn’t a strong swimmer shouldn’t swim here.

The Caribbean side of the island is super calm and ideal for swimmers at all levels. It’s the best place to take part in watersports.

Check out this handy map for more details:

Thanks for reading this post on if St Lucia has sharks. Hopefully it put your mind at ease if you are worried about sharks.

Although a warning was issued, no major sharks have ever been sighted in St Lucia so it’s highly unlikely you’ll have any issues.