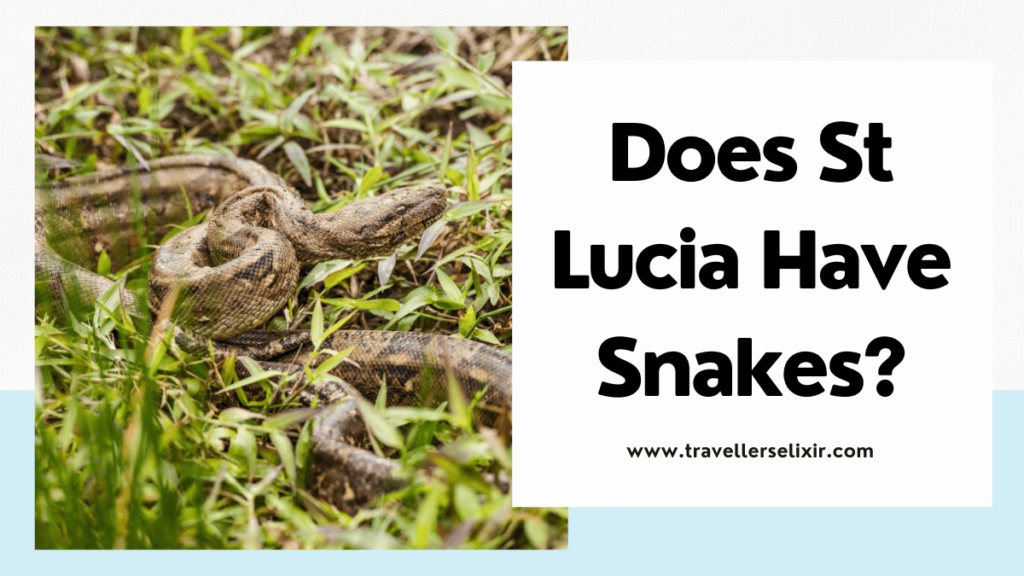 If you’re worried about potential venomous snakes in St Lucia then this post is for you.

This guide covers everything you need to know about snakes in St Lucia including where they live, if they can harm you and what to look out for.

Does St Lucia Have Snakes?

Yes, St Lucia does have snakes however they aren’t found near the resorts or the main tourist areas. The snakes are mainly found deep within the rainforest.

The truth is that you’re highly unlikely to see a snake whilst visiting St Lucia. If anything, you might spot one if you go on a hike through the rainforest but even then it’s unlikely.

You’ll definitely not see them slithering around the resorts or in the main tourist areas like Rodney Bay, Gros Islet, Castries or Soufriere.

The snakes don’t live in urban areas as it’s not their natural environment and they tend to avoid any areas that are frequented by humans a lot.

Contrary to some people’s beliefs, snakes are afraid of humans so they try to stay away from them.

Additionally, there are actually very few snakes left in St Lucia and some of the species that live there are threatened with extinction.

The Verdict: Yes there are snakes but if you’re visiting as a tourist then you have absolutely nothing to worry about.

Although snake sightings are rare, it’s worth knowing what to do if you do see a snake because not all snakes are harmless…

Are There Poisonous Snakes in St Lucia?

Yes, there are poisonous snakes in St Lucia but they aren’t found in the main tourist areas.

Although there are venomous snakes in St Lucia, almost all of the snakes found in St Lucia are harmless.

In fact, there are four different species of snake found in St Lucia in total and three of these species are harmless to humans.

These three harmless snake species are actually protected by law so it’s illegal to hurt them.

The fourth snake species, which is poisonous, isn’t protected by law meaning the numbers are extremely low.

Here’s what you need to know…

The fer-de-lance snake, also known as the St Lucia lancehead or St Lucia viper, is a venomous snake found only in St Lucia.

These poisonous snakes can reach over 4ft in length and are usually a gray-brown color.

Whilst attacks on humans are extremely rare, these poisonous snakes do have the potential to do real damage to you. Their bite can even be deadly in extreme circumstances.

In fact, the fer-de-lance is actually the most dangerous snake found in the whole of the Caribbean!

It’s worth noting that death from this snake bite is extremely rare and will only really occur if you don’t seek medical attention.

Whilst that all does sound a bit scary, you don’t have to worry as the snake itself isn’t found all over the island and definitely isn’t found in the main tourist areas.

The fer-de-lance snake is limited to two small sections of the island from Roseau to Canaries on the west coast and from Dennery to Praslin on the east coast.

Take a look at the map below for the exact fer-de-lance locations:

As you can see, the fer-de-lance snake is only found in two specific coastal areas in St Lucia, neither of which are frequented by tourists.

This means that you won’t find them in the main tourist areas like Gros Islet, Rodney Bay, Castries, Soufriere or the Pitons which I’ve also highlighted on the map.

The fer-de-lance snake is native to the island of St Lucia. In fact, this type of snake is only found in St Lucia.

Fer-de-lance actually means ‘spearhead’ or ‘iron of the lance’ in French.

50 years ago, this snake could be found all over the island, however today it is much more limited to just the two small areas which are super rural and pretty much never visited by tourists.

This snake is currently endangered and is at threat of extinction. This is mainly because they are usually killed by the local community whenever spotted.

What To Do If You See This Snake?

If you do come across a fer-de-lance, you should not approach it.

Don’t try to get close to take a photo as these snakes are easily startled and will defend themselves.

It’s also important not to run away from the snake as this will also startle them. If the snake gets scared, it may bite you. Instead of running, walk away slowly.

If you do get bitten then seek medical attention as quickly as possible. Hospitals have anti-serum on hand so get there as quickly as you can.

Boa constrictors can also be found in St Lucia and are one of the most common types of snakes found here.

Although these snakes look a bit scary, they are actually non-poisonous and harmless to humans so if you spot one, you have little to worry about.

These types of snakes also tend to hiss a lot if approached by humans but they can’t actually seriously hurt you.

It’s still best to keep your distance though as they can still bite you. The bite itself can be painful (especially from larger snakes) but it’s not venomous so won’t leave any lasting damage.

They tend to be found in some of the drier shrub and bush areas of the island along the coast and occasionally show up on hiking routes. If you have any concerns then it’s best to go with a tour guide.

Boa constrictors can reach up to 10ft in length and are usually a brown-gray color.

Some locals have captured some of these snakes and use them as sort of a tourist attraction.

You may see these vendors at the side of the road, particularly on the main road from Castries to Soufriere, encouraging you to stop and see their boa constrictor and take a photo.

Another type of snake that lives in St Lucia is the worm snake which is actually the world’s smallest snake. This snake is also known as the St Lucia threadsnake.

These types of snakes only reach 6 inches long and are usually a brown color with two dark yellow lines running along their back.

They are harmless to humans and actually spend most of their life underground so you probably won’t even see one. They do sometimes come out after a heavy rainshower.

The last type of snake found in St Lucia is the St Lucia racer snake which is incredibly rare. In fact, it’s thought that there may be as little as just 20 snakes remaining.

This snake doesn’t live on the mainland and is only found on Maria Islet which is a tiny island that sits just off the southern coast of St Lucia.

It is relatively small as it only grows to around 3ft and tends to live off small birds, frogs and lizards.

It’s also harmless to humans so if you do happen to visit Maria Islet and spot one, you don’t need to worry.

These small snakes used to be widespread across St Lucia but were largely wiped out by the mongoose which feeds on them.

Other than the fer-de-lance snakes, there aren’t many other dangerous animals in St Lucia.

There are a few animals you should watch out for though.

Firstly, you will find scorpions in St Lucia. Their stings are painful but not lethal and they won’t cause you any harm other than the painful sting.

It’s best to steer clear of them either way.

You’ll also occasionally come across tarantulas and, if they bite you, it will hurt. However, apart from the actual bite, you’ll not suffer any harm.

Find out more about spiders in St Lucia.

Many people visiting St Lucia also worry about sharks however it’s great to know that sharks are rare in St Lucia.

Thanks for reading this post all about St Lucia’s poisonous snakes and what to look out for.

All in all, there’s little to worry about when it comes to snakes in St Lucia as the snakes don’t come anywhere near the resorts or main tourist areas.