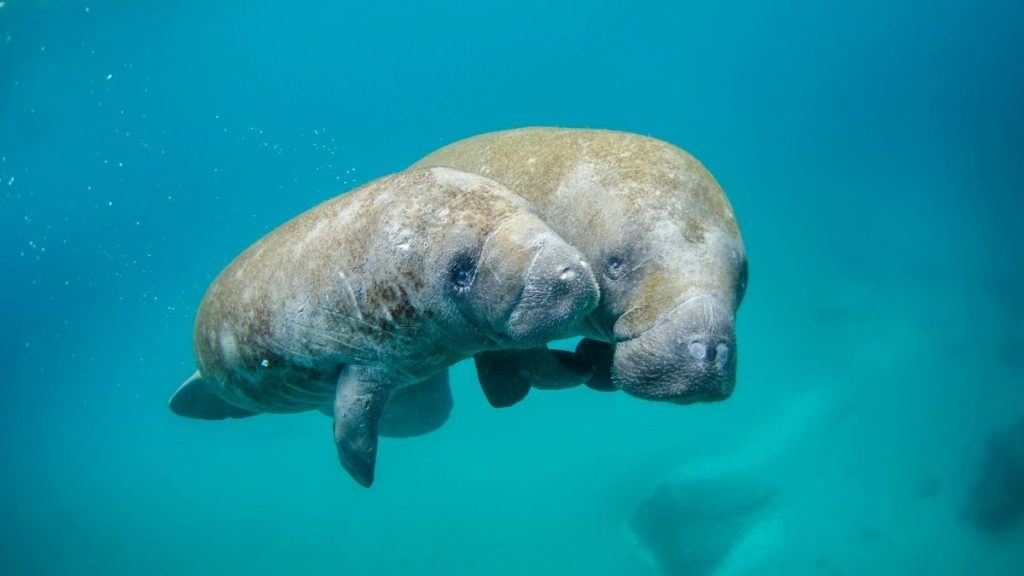 If you’re looking for somewhere to see manatees in Puerto Rico then you’re in the right place.

There’s plenty of places to see manatees in their natural habitat all over Puerto Rico.

This post will tell you all of the best places to see manatees in Puerto Rico and includes all the information you’ll need for a fun day out.

Where To See Manatees In Puerto Rico

Below I have listed all the best places in Puerto Rico where you can see manatees in the wild.

Condado Lagoon, located in San Juan, is the best place to see manatees in Puerto Rico.

In this lagoon, you can often see the manatees swimming around or eating the sea grass that can be found there.

There are lots of super fun ways to see the manatees in Condado Lagoon.

One of the most popular ways to see them is by renting a glass bottom kayak and rowing alongside the manatees or alternatively you could try hiring a water bike if you don’t want to get too wet.

There’s also options to try stand up paddle boarding too!

These activities are not only super fun but they also give you the chance to swim with manatees in Puerto Rico and get really close to them in their natural habitat.

Check out the video below to see some manatees in Condado Bay:

Another great place to see manatees in Puerto Rico is at the Cabezas de San Juan Nature Reserve in Fajardo.

The best way to see the manatees at the Cabezas de San Juan Nature Reserve is to get in the water and go snorkeling! You’ll be able to swim with the manatees which is definitely an experience you won’t forget.

The manatees are most commonly seen around the coral reefs and the rocky beaches of the nature reserve.

La Parguera is a village located in the town of Lajas in southwestern Puerto Rico. This quaint village features a bioluminescent bay, mangrove forests and nature reserves too.

One of the best places to see the manatees in this village is at the La Parguera Nature Reserve where you’ll find a well-developed and extensive coral reef.

You often find manatees swimming and looking for food in this area.

The best way to see the manatees in La Parguera is by renting a water bike.

This super fun activity allows you to navigate through the beautiful mangroves and pass by lots of wonderful marine life including manatees, sea turtles and iguanas too.

If you enjoy seeing manatees, you may also be interested in knowing where to swim with dolphins in Puerto Rico.

Another great place where you can see manatees in Puerto Rico is the Jobos Bay Reserve in Aguirre which is on the south side of the island.

This reserve is also known as the Jobos Bay National Estuarine Research Reserve.

The Jobos Bay Reserve is made up of mangrove forests, seagrass beds, coral reefs and lagoons. The reserve serves as an oasis for many marine species including manatees.

To see the manatees, most people hire a kayak at the bay. You can then paddle alongside the manatees in their natural habitat.

Check out the video below which shows a family of manatees happily swimming in the Jobos Bay Reserve:

Did you know you can also see turtles in Puerto Rico?

Another great place in Puerto Rico where you can see manatees is Isla Verde.

Isla Verde is a seafront area located just outside of San Juan mainly known for its stunning white sandy beaches.

Some of the best spots in Isla Verde to spot manatees are on Pine Grove Beach and Isla Verde Beach.

You could hire a kayak or try paddleboarding whilst in the area and if you’re lucky you might spot a manatee. Other popular activities in the area are snorkeling and scuba diving.

Check out the below video of some manatees in Isla Verde spotted whilst snorkeling:

Vieques Island is a small island that lies just off Puerto Rico’s eastern coast. It’s another great spot in Puerto Rico where you can often see manatees.

This island is best known for being an excellent snorkeling location where you can observe lots of interesting marine life.

The manatees are most often seen at Bioluminescent Bay, Mosquito Pier and El Gallito (Gringo Beach).

Mosquito Pier is a popular snorkeling site where visitors often are able to spot manatees swimming around. This pier is on the north side of the island.

A great place to learn more about manatees is at the Manatee Conservation Center in San Juan.

This center is also a research, rescue and rehabilitation center for the manatees.

Tours of the center are available in both English and Spanish.

As well as tours of the conservation center, you can also join the ‘Manatee Caretaker for a Day’ program where visitors help prepare and give food to the manatees. You will also be able to help out with daily care tasks too.

This is a unique experience where you get the opportunity to get up close and personal with the manatees and also help take care of them.

You can meet some of the manatees of the Manatee Conservation Center in the video below:

Another area of Puerto Rico where you can sometimes see manatees is Cabo Rojo.

Cabo Rojo is a region on Puerto Rico’s southwest coast which is known for having mangroves, coral reefs and beautiful beaches.

Manatees can often be seen at Playa Sucia, a stunning crescent-shaped beach. This secluded beach is an excellent place to relax and look for manatees.

Palomino Island, or Isla Palominos, is a small island that is located just 3 miles off the eastern shore of Puerto Rico.

The island is known for its white sandy beaches and crystal clear waters.

There are some coral reefs present which brings with it an abundance of marine life including fish, turtles, manatees and even the odd dolphin!

As the island is mostly uninhabited this means there isn’t much to disturb the marine life so it’s a great place to observe manatees in the wild.

Another place you can see manatees in Puerto Rico is Boquerón Bay.

Boquerón Bay is located on the southwestern tip of Puerto Rico. The beaches lining the bay are a popular tourist destination with people coming from afar to enjoy them.

Manatees have made their home in the bay and you will often see them swimming in the water. One of the best ways to catch a glimpse of them is by heading out on a boat into the bay.

Guanica Bay, located on the southern side of the island, is another place where you can often see manatees in Puerto Rico.

Guancia Bay has a population of manatees that can often be seen when swimming in the bay.

Thanks for reading this post on where to see manatees in Puerto Rico.

Wherever you are in Puerto Rico, there’s plenty of options here to see manatees in their natural habitat.

Interested in going shelling in Puerto Rico? It’s a great way to bring home a special souvenir from your trip.