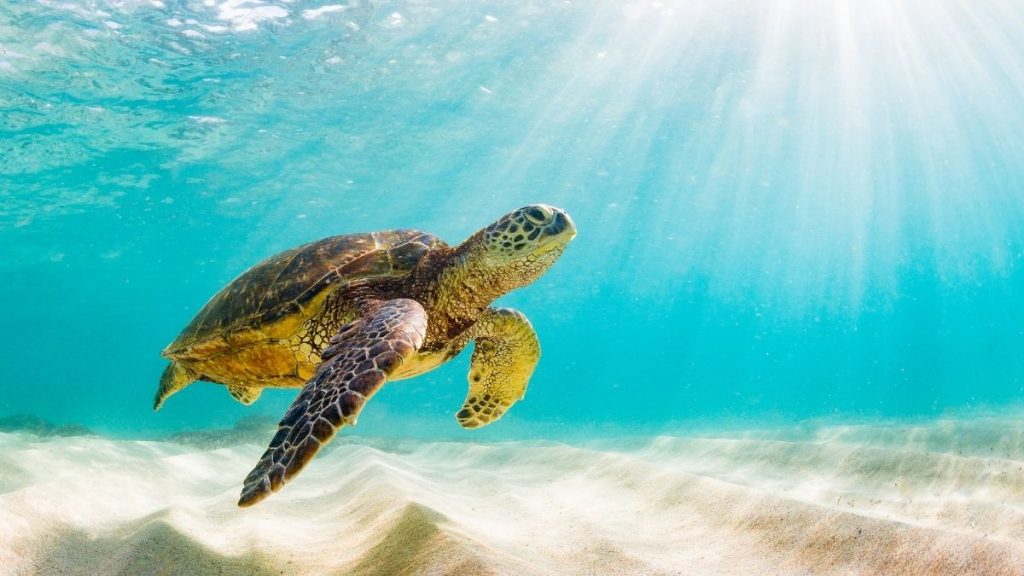 If you’re looking for somewhere to see sea turtles in Puerto Rico then you’re in the right place.

There’s plenty of places to see sea turtles in their natural habitat all over Puerto Rico.

This post will tell you all of the best places to see sea turtles in Puerto Rico and includes all the information you’ll need for a fun day out.

Turtles have been found swimming around the shores of Puerto Rico for a very long time and today you’ll find them in many places all over the island.

There are 3 main species of sea turtle found in Puerto Rico. These are the​​ hawksbill, leatherback, and green sea turtles.

For the best chance of seeing a sea turtle, head to one of the places in the list below.

The best place to see sea turtles in Puerto Rico is on Culebra Island.

Culebra Island is a small island that is located just off the east coast of Puerto Rico mainland. It’s easy to get to from Fajardo.

The best place to see sea turtles on this island is at Tamarindo Beach on the west side of the island.

This beach is well known for its crystal clear waters and coral reefs that are filled with an abundance of interesting marine life including tropical fish, sea turtles and rays.

The best way to see the sea turtles here is to join a snorkeling tour!

You’ll be able to swim with the turtles and get up close to them. These tickets also tend to include transport from mainland Puerto Rico to Culebra Island and back which is super handy.

Many people also opt for a kayaking tour which is another great way to see the turtles.

Other beaches on the island where you can see sea turtles include Zoni Beach, Playa Resaca, Flamenco Beach, Playa Carlos Rosario and Playa Brava.

The turtles found on Culebra Island are leatherback and green sea turtles.

Check out the video below to see some of the turtles of Culebra Island seen whilst snorkeling:

One of the best places to swim with sea turtles in Puerto Rico is at Escambron Beach in Guaynabo, San Juan. This beach is also known as Balneario El Escambron.

This stunning crescent shaped beach is well known for its coral reefs which bring with them an array of marine life including sea turtles.

The best way to see the sea turtles here is to join a snorkeling tour where you’ll be able to get into the water and swim right alongside the turtles.

Other fun options available at Escambron Beach include jet snorkeling and scuba diving (for beginners).

These are definitely experiences you won’t forget!

Check out the video below which shows a sea turtle spotted whilst out swimming at Escambron Beach:

Did you know you can also see manatees in Puerto Rico?

In this lagoon, you can often see sea turtles swimming around in the lagoon. You’ll also see lots of other animals too including starfish and stingrays.

There are lots of super fun ways to see the sea turtles  in Condado Lagoon.

One of the most popular ways to see them is by renting a glass bottom kayak and rowing alongside the turtles or alternatively you could try hiring a water bike if you don’t want to get too wet.

These activities are not only super fun but they also give you the chance to swim with sea turtles in Puerto Rico and get really close to them in their natural habitat.

This area is located just off the coast of Fajardo and is formed from a range of cays and small islands with wonderful reefs and crystal clear waters. Cayo Icacos is the largest island here.

There’s lots of marine life to see here. The best way to see the turtles is on a snorkeling tour where you’ll be taken from the mainland to the nature reserve.

Another spot which is part of this nature reserve is the Arrecifes de la Cordillera Natural Reserve.

This site also consists of a chain of islands with mangroves, lagoons, sandy beaches and coral reefs.

Check out the video below taken whilst snorkelling at Cayo Diablo, which is part of the Cayos de la Cordillera Nature Reserve:

Vieques Island is a small island that lies just off Puerto Rico’s eastern coast. It’s another great spot in Puerto Rico where you can see sea turtles.

This island is best known for being an excellent snorkeling location where you can observe lots of interesting marine life. This is mainly due to the island’s abundance of coral reefs.

The sea turtles are most often seen at Esperanza Beach, Mosquito Pier and Playa Pata Prieta.

Mosquito Pier is a popular snorkeling site where visitors often are able to spot sea turtles swimming around.

Mosquito Pier is on the north side of Vieques Island.

Check out the video below which shows a sea turtle spotted whilst snorkeling on Vieques Island:

Another great place to see sea turtles in Puerto Rico is at the Cabezas de San Juan Nature Reserve in Fajardo.

The best way to see the sea turtles at the Cabezas de San Juan Nature Reserve is to get in the water and go kayaking and snorkeling!

You’ll be able to swim right alongside the sea turtles which is definitely an experience you won’t forget.

The sea turtles are most commonly seen around the coral reefs of the nature reserve.

If you enjoy seeing turtles, you may also be interested in knowing where to go whale watching in Puerto Rico.

Steps Beach, also known as Tres Palmas Marine Natural Reserve, is another great spot in Puerto Rico where you can see and swim with sea turtles.

Located on the west side of the island in Rincon, this beach is a well known snorkeling spot.

You’ll see tropical fish, turtles and the odd dolphin too!

A coral reef runs right along the length of the beach so it’s the perfect place to go snorkeling, most people book onto a snorkeling tour so they don’t miss anything.

The turtles at Steps Beach are hawksbill turtles which are currently endangered, but you have a really good chance of seeing one here!

Check out the video below to see some sea turtles spotted whilst snorkeling in the crystal clear waters of Steps Beach:

La Parguera is a village located in the town of Lajas in southwestern Puerto Rico.

This quaint village features a bioluminescent bay, mangrove forests and nature reserves too.

One of the best places to see the sea turtles in this village is at the La Parguera Nature Reserve where you’ll find a well-developed and extensive coral reef.

You often find sea turtles swimming in this area.

The best way to see the sea turtles in La Parguera is by renting a water bike.

This super fun activity allows you to navigate through the beautiful mangroves and pass by lots of wonderful marine life including manatees, sea turtles and iguanas too.

Mona Island, a small island that lies just off the west coast of Puerto Rico, supports the largest hawksbill sea turtle nesting ground in the Caribbean.

Mona Island is the perfect habitat and the best kept Caribbean refuge for many marine animals including turtles.

This secluded island paradise is very popular with divers who come from afar to explore the untouched beaches, caves and coral reefs.

The island itself is uninhabited and protected by the Department of Natural and Environmental Resources meaning its wildlife is well protected.

If you want to see sea turtles hatching then the best place is at the Wyndham Grand Rio Mar Beach Resort and Spa.

This beach resort has its own stretch of beach where a variety of turtle species come to lay their eggs.

For an unforgettable experience, you can witness the hatching of these turtles for yourself at the resort.

Staff members will lead you out onto the beach during hatching season so you can see it for yourself.

Thanks for reading this post on where to see sea turtles in Puerto Rico.

Wherever you are in Puerto Rico, there’s plenty of options here to see sea turtles in their natural habitat.