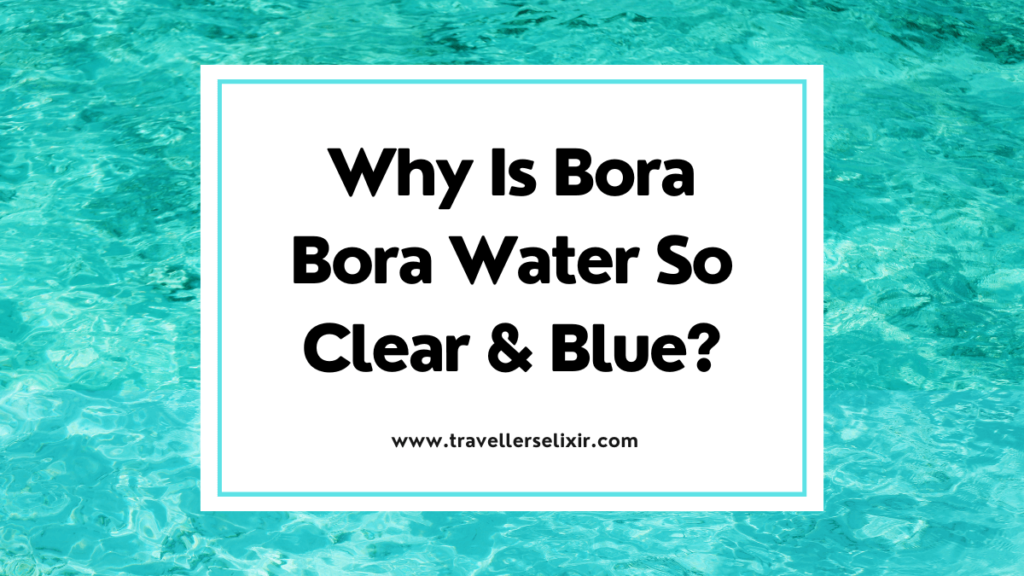 Bora Bora has some of the clearest and bluest waters on the planet. But why?

Why is the water in Bora Bora so clear and so blue? Let’s find out…

Why is Bora Bora Water So Clear?

If you’ve ever been to Bora Bora, you’ll have noticed just how clear the water is.

It’s so clear that if you stand in the water, you can see everything with extreme clarity.

See this for yourself in the video below:

If you happen to go snorkeling in Bora Bora, you’ll really be able to appreciate just how clear the water is as it is ridiculously easy to spot tropical fish and other marine life.

There are actually several reasons why the water is so clear in Bora Bora.

One of the main reasons why the water is so clear in Bora Bora is due to the presence of coral reefs.

Coral reefs act as a barrier, protecting the water and preventing the process of upwelling.

Upwelling is what causes some beaches to appear murky. It is essentially the process by which water moves from the deep ocean towards the ocean surface.

As this water comes from deep in the ocean, it often contains lots of nutrients, sediments, sand and even living organisms which make the water appear murky.

In Bora Bora, the coral reefs block this process from occurring as they act as a barrier and stop the deeper ocean water from coming to the surface.

As a result, the water is super duper clear (and I’m thankful for it!).

Another reason is that due to the warm temperatures in Bora Bora year round, algae are not able to grow.

If there’s a lot of algae in the water then it can often appear murky and green.

Another reason why the water appears very clear is that the water in Bora Bora is fairly shallow within the lagoon. In some parts of the lagoon, the water is just a few feet deep.

As the water is shallow, you can see the sea floor below it with ease which makes the water look clearer than if it was just a really deep part of the ocean.

Compare the two images below:

The image on the left is of Bora Bora. Notice how you can clearly see the sea floor.

The second image is of the deep ocean. The water doesn’t look as clear here as you can’t see the ocean floor but in reality the water is still really clear.

This point is also illustrated by the below photo:

This photo shows both the water within the lagoon and the water in the ocean which surrounds Bora Bora.

There is little difference in the clarity of the water here but as the water is shallower within the lagoon, it appears clearer.

Additionally, the water in Bora Bora has far less pollutants than most other coastal areas. The island is less built up and there’s no industrial presence that releases pollutants into the ocean.

Think about it…have you ever visited a city with a river running through the middle and noticed how grim the water looks?

It’s always a murky brown color. This is largely because of pollution from the city.

Bora Bora doesn’t have much to pollute the water meaning it can remain clear and healthy looking at all times.

The ecosystem surrounding Bora Bora is also extremely healthy. They have tons of vibrant coral gardens that are thriving. This wouldn’t be possible if the water was polluted.

Why is Bora Bora Water So Blue?

The water in Bora Bora is a stunning turquoise shade that glimmers in the sunlight. You’ll struggle to find water this blue anywhere else in the world.

There are several reasons why the water in Bora Bora looks so blue.

Water, overall, is blue. This is because water absorbs red, orange and yellow wavelengths from sun rays and doesn’t absorb blue wavelengths as strongly.

Instead, it reflects the blue light and this is what we see when we look at water.

You may have noticed though that water is sometimes different shades of blue. Sometimes it appears as an aqua blue shade and other times like a dark blue color.

When you look at a picture of the deep ocean, it usually looks like a really dark, navy shade of blue.

This is because the water is super deep so the sunlight can’t reach the bottom of the ocean and reflect back. Instead the deep water absorbs all of the light.

In shallower waters, the blue is lighter because the sun rays reflect off the ocean floor and are not completely absorbed by the water.

They reflect back up and make the blue look more aqua.

Another reason is that the white sand, which surrounds the island and makes up the sea bed, causes the water to appear bluer.

Take a look at the image below:

The blue square on the left appears to be a more vibrant shade of blue, right!?

You’re right! Although these squares are the same shade of blue, they now appear to be different due to the colors beneath them.

The reason for this is because the square on the left is surrounded by white and is made lighter due to the white background.

The blue square on the right is made darker by the black square behind it.

A similar concept takes place in real life in Bora Bora. As the ocean floor in Bora Bora is white, this reflects the sky and amplifies the blue color of the water.

Is the Water in Bora Bora Clean?

Yes, the water in Bora Bora is very clean.

There’s very little pollutants in the water so if you choose to go snorkeling, you have little to worry about.

In terms of drinking water, it is completely safe to drink water from the tap in Bora Bora.

Thanks for reading this post all about why the water in Bora Bora is so clear and so blue.

If you ever get the chance to see these waters in real life then I promise that you will be absolutely blown away as it looks even better in person.