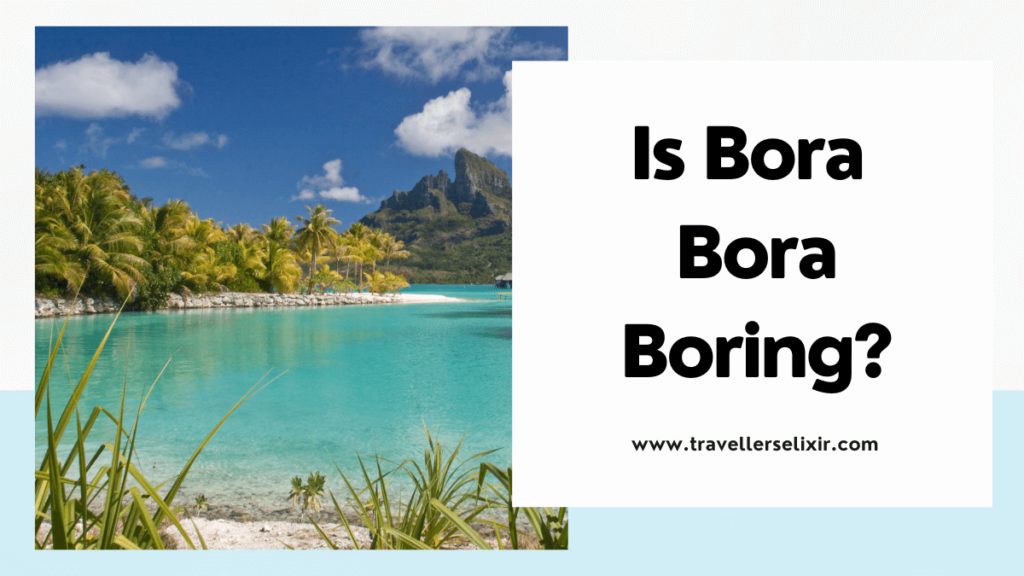 Wondering if Bora Bora is boring?

You’re not the only one. That’s why I’ve put together this honest review on whether or not I think Bora Bora is boring and if it’s overrated.

Chances are, if you’re reading this post, then you’ve heard that Bora Bora is boring.

Some people say that there isn’t much to do other than lounging around on the beach or on the deck of your overwater bungalow.

It’s even garnered the nickname ‘Boring Boring’ by some visitors.

It’s true that this secluded paradise island doesn’t have a million and one different things to do and most activities revolve around that stunning, turquoise lagoon.

However, in my personal opinion, Bora Bora isn’t boring. There’s actually tons of different things to do and that’s speaking as someone who is a definite ‘do-er’ on vacations.

My usual vacations are jam-packed city breaks filled with sightseeing but I definitely don’t think that Bora Bora is boring.

You’ll find that the majority of people also don’t think that Bora Bora is boring.

This place really is the ultimate tropical paradise. It’s almost impossible to get bored of these views.

The water is the clearest and bluest that you’ll ever see and it’s filled with an abundance of tropical fish, rays and small reef sharks.

You’ll also be greeted by towering mountain views at every corner, luscious blue skies and did I even mention overwater bungalows?

Personally, I’d be more than happy to lounge around in an overwater bungalow for a week! Bora Bora is the best place to just sit back and relax.

You can also take part in a number of fun activities like snorkeling, diving, parasailing and swimming. There are also hiking trails, 4×4 tours and sunset cruises around the lagoon to keep you busy.

Many of the fancy resorts also put on events during the day like flower crown making classes, basket weaving classes and cooking classes which are super fun and give an insight into the local Tahitian culture.

Bora Bora is beautiful, peaceful and romantic. If you enjoy stunning views and a laid-back atmosphere then you’ll have no complaints about Bora Bora.

To decide for yourself, check out my 5-day Bora Bora itinerary. I tell you exactly how I think you should spend 5 days in Bora Bora.

Who Is Bora Bora Boring For?

Who Is Bora Bora Perfect For?

Here’s what you can expect from a vacation in Bora Bora:

There are definitely some downsides to Bora Bora and some things that are certainly missing.

For example, shopping is pretty limited in Bora Bora. If anything you can visit a local market or a craft store and buy yourself a Tahitian pearl necklace to take home as a souvenir but that’s about it.

Additionally, Bora Bora has very limited nightlife. If you’re looking to party until the early hours then you’re probably not going to like Bora Bora.

I did write an entire guide on things to do at night in Bora Bora for some ideas on how you can spend your evenings.

Despite there being limited nightlife, you can definitely easily grab a drink or two and a snack after dark. Most bars/restaurants close at around 11 PM in Bora Bora.

This means you can easily explore the whole thing in an hour or two.

Additionally there’s not a lot of sightseeing opportunities on the main island.

All you’ll find there is the small village of Vaitape, the huge Mount Otemanu and Matira Beach which is often ranked as one of the most beautiful beaches in the whole world.

Although there’s not a lot of sightseeing, that doesn’t mean that Bora Bora is boring…

Things to Do in Bora Bora

The majority of activities in Bora Bora are water-based and revolve around the turquoise lagoon with the towering green volcano, Mt Otemanu, sitting in the middle.

It’s truly breathtaking and you’ll not be able to get enough of it.

My absolute favorite thing to do in Bora Bora is jump into the lagoon for a swim with some fish, rays and even reef sharks (don’t worry, the sharks are friendly).

You can even explore some vibrant coral reefs. At Conrad Bora Bora Nui, they have coral growing around the overwater bungalows themselves.

If you’ve booked an overwater bungalow, then jump into the lagoon straight from your deck!

💡Tip: Bring an inflatable pool float with you to lounge in the lagoon just outside your villa. You can also bring a bit of rope to tie your float to your overwater bungalow so that you can relax without floating away. Genius right!?

Check out my ultimate Bora Bora snorkeling guide for the exact spots and locations where you’ll find the most marine life.

Bora Bora is largely tailored towards couples, especially those on a honeymoon. It’s super romantic and you’ll find that the peace and quiet is just what you need.

Try out a relaxing couples massage or take a romantic stroll on the beach. Most resorts have an on-site spa which makes relaxation easy.

Being completely honest, there isn’t much for kids to do in Bora Bora. Families with children will likely prefer other vacation destinations.

There’s only so much snorkeling and swimming that kids can do before they get bored.

This question is hard to answer because it really depends on each person.

It literally has some of the clearest and bluest waters on the planet, tons of fantastic snorkeling opportunities and luxurious overwater villas.

It’s no lie that Bora Bora is really expensive. In fact, you’ll likely have to spend a small fortune to visit.

On average, a week-long vacation for two people in Bora Bora will cost around $11,000. For more information on this, check out my full cost breakdown of a vacation in Bora Bora.

That’s a lot of money.

But there’s a reason that people spend this much…

Firstly, Bora Bora is in an extremely secluded location. It’s literally smack-bang in the middle of the South Pacific Ocean.

Bora Bora is about as remote as it gets and you pay a lot for this.

Not only do you pay for the airfare of getting to such a secluded location but also for the luxury of being able to visit a place in the middle of nowhere.

Next, Bora Bora is known for extreme luxury and for having some of the best overwater bungalows on the planet.

In fact, overwater bungalows were invented in French Polynesia!

💡Fact: The first hotel ever to feature overwater bungalows was on the nearby island of Moorea and opened in the 1960s.

At some resorts, including the St Regis Bora Bora and the Four Seasons Bora Bora, you even get your own dedicated butler.

Yep, that’s a whole person dedicated to just you and your partner.

They can help with pretty much anything you want from restaurant reservations, spa appointments, recommendations, activity bookings and more.

They will even unpack and repack your suitcase for you!

If one thing’s for sure, you pay for exclusivity and Bora Bora sure is exclusive.

To put that into perspective, Hawaii gets the same number of visitors in one weekend as Bora Bora gets in an entire year.

Bora Bora is also a favorite spot for celebrities.

For example, Jennifer Aniston spent her honeymoon here in 2015 with Justin Theroux, staying at the Four Seasons Resort.

The Kardashians also visited in 2011, staying at the Conrad Bora Bora Nui with it even featuring on their reality show.

4. Once In A Lifetime

For the majority of people visiting Bora Bora, this will be their only visit.

Over half of the people who visit Bora Bora are actually on their honeymoon. Most other people visit to celebrate an occasion like a wedding anniversary or milestone birthday.

It can take years to save up the money to visit so it really is a once in a lifetime opportunity and for this reason most people are happy to spend a little more than they normally would on a vacation.

If you want to make your honeymoon or anniversary super special then what better place to do it than in Bora Bora?

Is Bora Bora Really Worth It?

Again, the answer to this question varies depending on the person.

Some people, for sure, wouldn’t spend $1,000+ per night to stay in an overwater bungalow but some people would.

For me, I think Bora Bora is definitely worth it if you’re planning a super special vacation like a honeymoon or important wedding anniversary.

Bora Bora is one of the most romantic places on the planet and is a great place to really connect with your partner and relax.

If you’re traveling with children then it may not be worth it. I personally don’t think that there’s that much for kids to do in Bora Bora.

I also think it’s worth mentioning that if your budget is tight then it’s probably not worth visiting.

Most of the really impressive stuff in Bora Bora costs a lot of money.

You can definitely get by in Bora Bora on a budget. For example, you can stay in a local guesthouse to save on hotel costs and you can dine at local street food trucks to avoid expensive restaurants.

I personally don’t think it’s worth coming all this way if you’re not going to enjoy the best of what Bora Bora has to offer like overwater bungalows, top restaurants and fun activities.

Again, this is completely up to you and will vary person to person.

Thanks for reading this post on if Bora Bora is boring and if it is overrated.

Hopefully now you have some clarity on if Bora Bora is the right vacation destination for you.

For me, I honestly don’t know how anyone can say that Bora Bora is boring when there’s just immense beauty and wildlife surrounding you at all times. It’s a paradise!