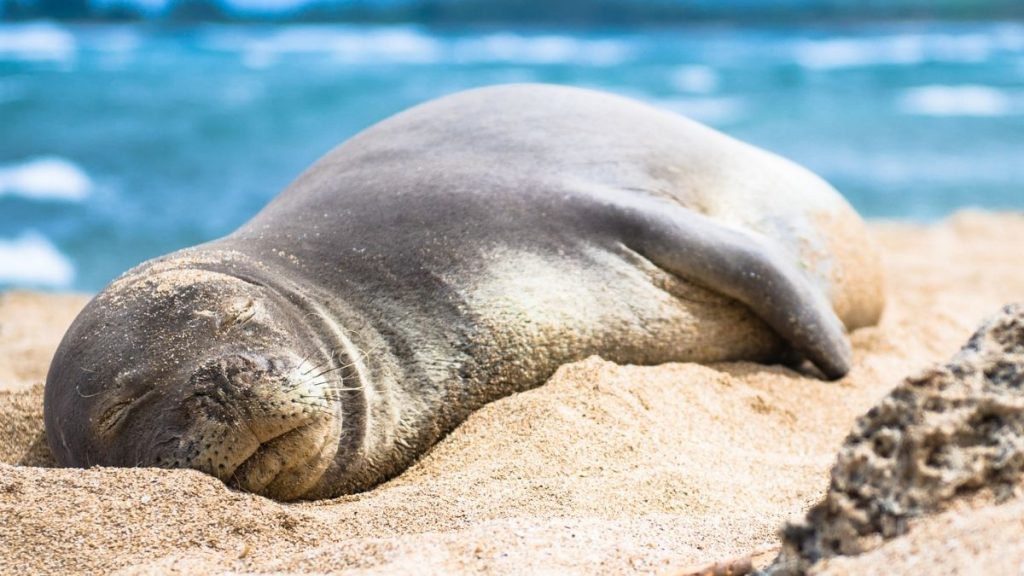 If you’re looking for somewhere to see seals in Hawaii then you’re in the right place.

There’s plenty of places to see seals in their natural habitat all over Hawaii, from Kauai to Oahu.

This post will tell you all of the best places to see seals in Hawaii and includes all the information you’ll need for a fun day out.

The seals found in Hawaii are Hawaiian monk seals.

Hawaiian monk seals are an endangered species with currently only approximately 1,400 seals remaining.

Ancient Hawaiians referred to the seals as ”ilio holo I ka uaua’ which translates to ‘dog that runs in rough water’.

In the past, Hawaiian monk seals were only really seen on the island of Kauai but in recent years, the seals have also been spotted on all of Hawaii’s main islands.

Kauai is the best place to see seals in Hawaii and offers the most frequent sightings. You can often find seals resting and sunbathing on the shore here.

Seals can be spotted all over Hawaii and this article includes the best locations on all of Hawaii’s main islands where you can see the seals.

If you are lucky enough to spot a seal please remember these quick tips:

Following these simple tips will help protect this endangered species and help ensure their survival.

As a quick summary, below I’ve listed the best tours and excursions available on the various Hawaiian islands that all include seeing Hawaiian monk seals!

Now let’s take a look in a bit more detail at all of the best places in Hawaii where you can see seals!

Kauai is the best place to see Hawaiian monk seals in Hawaii because it is very close to the seal’s main feeding grounds.

Take a look at the best spots on the island to see them below:

The beach features crystal clear waters and soft golden sand. It’s a well known Hawaiian monk seal hotspot and the seals can often be seen sunbathing and lounging on its shores.

It’s actually one of the best places in the whole of Hawaii to see the seals!

Snorkeling is a popular activity at the beach and a great way to spot the seals. You can join a snorkeling tour for the best possible chance of seeing one.

Check out the video below of a monk seal spotted on Poipu beach:

These remote, tucked away beaches are favorites of the Hawaiian monk seals and sightings on their shores are common.

There’s tons of beaches along this coastline to choose from including Miloli‘I Beach, Ke’e Beach, Nualolo Kai Beach, Honopu Beach and many more.

Another prime location in Kauai where you can often spot Hawaiian monk seals is on Shipwreck beach.

Shipwreck beach is located on the southern shore of Kauai, close to Poipu beach. This beach is famous for having wrecked numerous ships over the years (hence the name).

It’s popular for walking, swimming and surfing. You can often see seals sunbathing on the sand here.

Hawaiian monk seals can also be seen in Oahu.

Below I’ve listed the best places in Oahu to see seals including several monk seal beaches where you can get up close and personal with them!

Hawaiian monk seals can sometimes be spotted on the shores of Waikiki, a vibrant neighborhood in Honolulu.

Waikiki is a popular tourist spot where you’ll find high-rise hotels lining the shore, surfing beaches and tons of fancy restaurants and bars.

Head to the beaches for a potential glimpse of a seal. One of the best monk seal beaches in Oahu is Kaimana Beach.

You could join a scuba diving tour for an epic view of the seals – it’s suitable for beginners so don’t worry if you’ve never dived before.

You can often spot a seal basking in the sun on Kaimana Beach in Waikiki and if you’re lucky you may even spot a pup like the one in the video below:

Another place in Oahu where you have a good chance of seeing Hawaiian monk seals is Oahu’s north shore.

This long stretch of coastline is known for big waves and is popular with surfers. Some of Oahu’s best monk seal beaches can be found along this coast.

One of the best spots to catch a glimpse of a rare Hawaiian monk seal along the north shore is at Kaena Point.

Kaena Point sits at the western most tip of the island. The best option is to hike along the coastal trail up to Kaena Point, this will give you plenty of opportunities to spot seals on the various beaches that you’ll pass.

Check out the monk seal in the video below spotted on Oahu’s north shore whilst hiking to Kaena Point:

Another spot in Oahu where you can often spot Hawaiian monk seals is at Nanakuli Beach Park.

This stunning beach park on the west coast of Oahu features over 40-acres of land, a white sandy beach and tons of activities to enjoy.

If you’re interested in learning more about the seals then join a seal tour which teaches you all about the Hawaiian monk seals and allows you to see them up close in the wild at Nanakuli Beach Park.

The beach here is one of the best monk seal beaches in Oahu!

Another great place to see monk seals in Oahu is at the Lanai lookout.

Lanai lookout, located on the southeastern point of Oahu, is a popular lookout point that offers panoramic views of the ocean, cliffs and nearby islands.

It’s a popular sunset spot offering daily, glorious sunsets. You can join a sunset tour to make sure you experience this to the fullest.

The Lanai lookout overlooks the beautiful Kaiwi coastline below where you’re often able to spot seals, whales and sea turtles too.

Hawaiian monk seals can also be seen in various places on the island of Maui. Below I’ve listed the best spots in Maui to see the seals.

One of the best places in Maui to see Hawaiian monk seals is at Lahaina Harbor.

Lahaina Harbor is a small harbor located on the northwestern coast of Maui. It’s well known for its wide range of ocean activities, such as sailing and snorkeling.

It’s also one of the best places for whale watching in Maui.

Hawaiian monk seals can often be seen here too. You can take part in a wide range of water activities at Lahaina Harbor which gives you a chance of seeing the seals up close.

You can join a kayaking tour, a snorkeling tour in the harbor or even try stand-up paddle boarding too!

Another great place to spot seals in Maui is at Ho’okipa Beach Park.

It is actually a very popular surfing destination, but many people also come to the park to see seals.

For the best chance of seeing the Hawaiian monk seals, join a day tour like this one which includes a stop of Ho’okipa Beach Park.

Check out the video below showing a seal resting on the beach at Ho’okipa Beach:

Another place in Maui where you can often see monk seals is at Makena Bay.

It’s famous for its large sea turtle population but also features a range of other marine animals including seals.

For the best chance of seeing seals, join a kayaking and snorkeling tour where you’ll get an up close and personal view of the seals and you might also spot sea turtles, dolphins and manta rays!

Sightings of Hawaiian monk seals on Big Island are rare, but there is one place that you have a chance of seeing one.

One of the best places to see Hawaiian monk seals on Big Island is at Honokohau Beach which sits on the west side of the island.

This beach is part of the Kaloko-Honokohau National Park and is a popular spot for surfers and sunbathers.

At the south end of the beach is a small reef where animal sightings are frequent including seals, sea turtles and more. If you’re lucky you might spot a monk seal lounging on the beach.

For a stress free day, why not book onto a full day tour that stops off at Honokohau Beach giving you the opportunity to try and spot a monk seal.

Thanks for reading this post on where to see seals in Hawaii.

Wherever you are in Hawaii, there’s plenty of options here to see seals in their natural habitat in Kauai, Maui, Oahu and more.