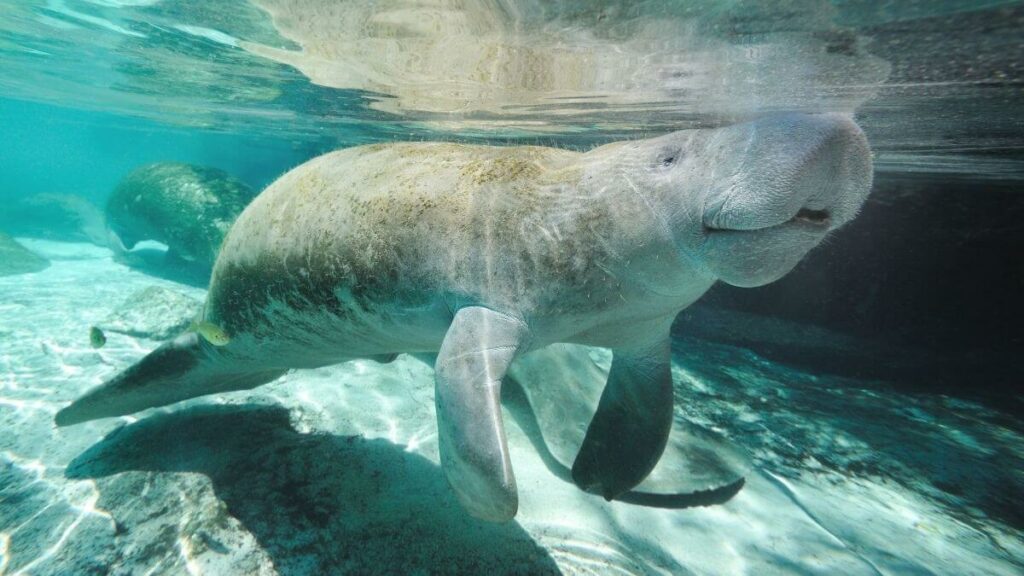 If you’re looking for somewhere to see manatees in Marco Island then you’re in the right place.

Nothing can beat that amazing feeling of seeing a manatee up close and personal in their natural habitat! Why not try it for yourself?

This post will tell you all of the best places to see manatees in Marco Island and includes all the information you’ll need for a fun day out.

You have a great chance of seeing manatees in Marco Island.

Manatees are large marine animals also sometimes referred to as ‘sea cows’. After seeing one of these beautiful creatures in real life, you’ll see why!

West Indian manatees love living in Marco Island due to the abundance of healthy seagrass beds which happen to be their favorite thing to eat.

The best places to spot manatees are in the canals that run through Marco Island as well as the surrounding Ten Thousand Island area.

For the best chance of spotting manatees, I’d recommend joining a wildlife viewing boat tour like this one.

You’ll be able to explore Marco Island and the Ten Thousand Islands with an experienced tour guide.

Expect to see dolphins, manatees, sea turtles, alligators, bald eagles and so much more on this tour.

For something a bit more adventurous, join this dedicated manatee kayaking tour where you’ll paddle through mangrove forests searching for manatees.

You can often see the manatees poking their heads out of the water in several spots across Marco Island.

So where can you see manatees in Marco Island?

The best place to see manatees in Marco Island is at the Ten Thousand Islands where you are almost guaranteed to see them.

Ten Thousand Islands is a chain of islands and mangrove islets that lie just off the coast of southwest Florida.

Marco Island is the largest and only developed island that forms part of Florida’s Ten Thousand Islands.

You will need to book onto a boat tour to see more of the islands. I’d recommend this wildlife viewing boat tour which will take you out from Marco Island.

The guides know exactly where to find the manatees without fail so you have a super high chance of spotting a manatee on this tour as well as dolphins and turtles.

Alternatively, you could join a manatee kayaking tour like this one. This tour is dedicated to spotting manatees in the Ten Thousand Islands!

This is the best way to see manatees up close and personal on Marco Island as you kayak through an extensive mangrove forest searching for them.

Another great place where you can see manatees in Marco Island is at South Marco Beach.

South Marco Beach is a stunning big beach with white sand made from shells. It’s one of the few beaches on Marco Island that is open to the public.

Manatee sightings are frequent here and you can even get out into the water and swim alongside them.

It can be hard to spot the manatees from the beach so look out for large circles in the water (these are known as ‘manatee footprints’) as well as large, dark spots in the water.

Tip: Wear polarized sunglasses to help see through the glare on the water. This will make spotting manatees so much easier.

Another place where you can see manatees on Marco Island is at Tigertail Beach.

Tigertail Beach is a very unique beach that only came into existence in 2005 due to a large hurricane.

Prior to 2005, an off-shore sandbar existed. When Hurricane Wilma hit, sand piled up towards the southern end, connecting it to the mainland and creating Tigertail Beach.

Today manatees tend to hang out in the warm, shallow waters here and can be spotted frequently.

You can even get into the water and get a closer view of the manatees if you like.

Tip: Bring a waterproof camera like the GoPro Hero 10 to get some photos and videos of you with the manatees.

Another place on Marco Island where you can see manatees is at Marco Marina.

This beautiful waterfront marina has a dock and a boardwalk where you can look out into the glistening waters, keeping your eyes open for manatees.

You’ll need a good eye to see manatees here. Scan the water for a snout or tail breaking the water’s surface.

Find out where to see manatees in Miami.

You can actually see manatees all over Marco Island in the canals that intersect the whole island.

The manatees prefer waters that are about 3 to 7 feet deep so keep this in mind when looking for them.

Just keep your eyes peeled for long enough and you’ll likely spot a snout or tail in the water.

One spot with frequent manatee sightings is just behind the Florentine Gardens Condo complex on Swallow Avenue.

There is a seawall just behind this building and you can often see manatees splashing around in the water from here.

Check out the video below to see some manatees spotted in the canals of Marco Island:

Best Time Of Year To See Manatees In Marco Island

You can see manatees on Marco Island year round.

Whilst you can see them at any time of year, the best time is during the winter months.

During the winter, water temperatures drop so manatees migrate to Southern Florida to stay in the warmer waters from November to March.

The West Indian species of manatee, which lives in and around Marco Island, only breeds in warm waters.

In fact, they die in water colder than 60 degrees so they wouldn’t survive in the winter further north.

That being said, the manatees also don’t like it when the water is too hot so during the summer, they tend to migrate back up north where it’s a bit cooler.

For this reason, your chances of seeing a manatee in Marco Island during the summer is low (but not impossible).

Did you know you can also see manatees in Fort Lauderdale?

What Is The Best Time Of Day To See Manatees In Marco Island?

You can see manatees at any time of day in Marco Island.

The manatees spend about half of their day eating and half sleeping. You’ll often spot them throughout the day when they’re looking for food.

The best time of day to see manatees is in the early morning. In the morning, manatees often move around in groups and are very playful. You can often see them eating and playing.

Manatees are an endangered species so it’s important that we do all we can to protect them.

Unfortunately manatee numbers are declining. This is due to a variety of factors including habitat loss, collisions with boats, entanglement in fishing gear and climate change.

It is actually illegal to touch or feed the manatees in Florida so to make sure you are keeping them safe, follow these simple tips:

These simple guidelines help keep both you and the manatees safe.

To get you prepared for your trip to Marco Island where you’ll hopefully see some beautiful manatees, here’s some fun manatee facts.

Thanks for reading this post on where to see manatees in Marco Island.

You should now have all the information you need to get out there and spot some manatees!