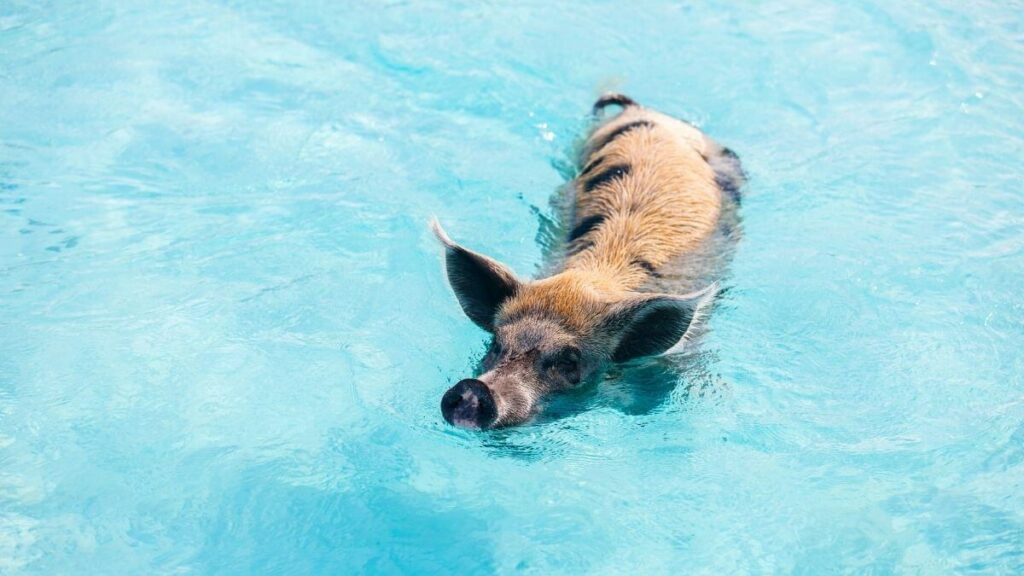 If you’re planning a trip to Bora Bora you may be wondering ‘is there somewhere I can swim with pigs in Bora Bora?’

Swimming with pigs is at the top of many people’s bucket lists but can it be done in Bora Bora? Find out below.

Can You Swim With Pigs in Bora Bora?

Unfortunately you cannot swim with pigs in Bora Bora as there are no wild pigs present on the island.

Don’t worry though, there are other places you can swim with pigs (more on this below).

It is a common misconception that you can swim with pigs in Bora Bora and many people believe you can do this activity however it isn’t true.

In fact, there are not many animals in Bora Bora at all other than sea animals.

Bora Bora is actually famous as being one of the only places in the world where you can swim with sharks so why not try this out instead (don’t worry it’s not dangerous).

Find out more about swimming with sharks in Bora Bora in my ultimate guide.

What Else Can You Do In Bora Bora?

As well as swimming with sharks, there’s plenty of other fun activities you can try out in Bora Bora.

This tour allows you to get out onto the water on a jet ski where you’ll cruise past stunning bays, small islands and Mt. Otemanu.

It also includes a shark and stingray boat safari and a delicious Polynesian lunch.

On this tour you can watch the sunset from the deck of a catamaran. It includes a glass of sparkling wine and snacks.

This tour is a day trip around the lagoon in Bora Bora. It includes a snorkeling experience where you’ll see tropical fish, coral, stingrays and maybe even a shark.

It also includes a delicious Polynesian lunch served on the beach.

Where Can You Swim With Pigs?

The only place where you can swim with pigs is in the Bahamas.

Specifically you will need to go to Big Major Cay which is one of the Exuma islands. The island is referred to as ‘Pig Island’ locally.

There you will find Pig Beach which is filled with cute pigs swimming in the clear water and playing on the golden sand.

The only way to reach Pig Beach is by joining a boat tour.

If you’re interested in swimming with pigs in the Bahamas, then check out the top rated tour below:

This tour includes swimming with the famous Bahamian pigs but also you’ll get the chance to feed iguanas and sharks.

If you’re looking for somewhere to stay in Exuma then Grand Isle Resort & Residences is one of the best.

For more information, you can read my post on the cheapest ways to swim with pigs in the Bahamas.

Check out the pigs of Exuma in the video below:

How Did The Pigs Get There?

It’s unclear exactly how the pigs came to live here as they were originally domestic.

The most likely theory is that they were dropped off by sailors who planned to come back to eat them.

Another theory is that they were the survivors of a shipwreck.

Of course, it’s also plausible that the pigs were put there on purpose as a tourist attraction.

Can You Pet The Pigs?

The pigs that you’ll find in Exuma are wild pigs – they’re not pets and they’re not domesticated.

That being said, the pigs are super friendly and are happy for you to swim right up to them, feed them and even give them a gentle stroke.

Of course, you need to ensure you’re treating the pigs with respect and you definitely shouldn’t try to ride them or pet them too hard.

Can You Feed The Pigs?

Feeding of the pigs is allowed but you should definitely think about what you are going to feed them.

If you feed them the wrong things it could cause harm to the pigs.

The Bahamas government has asked that tourists only feed the pigs pitted fruit and vegetables.

They also say you should only feed the pigs in the water (and not on the beach). This is because there is less chance of them ingesting sand in the water.

In the past, the pigs have been harmed by ingesting too much sand when they were being fed on the beach.

Recommended foods to feed the pigs:

Thanks for reading this post on if you can swim with pigs in Bora Bora.

Even though there aren’t any pigs in Bora Bora, there’s still plenty of other fun things to do in Bora Bora.

There are actually tons of misconceptions about Bora Bora. Many people also wonder ‘is Bora Bora in the Bahamas?‘