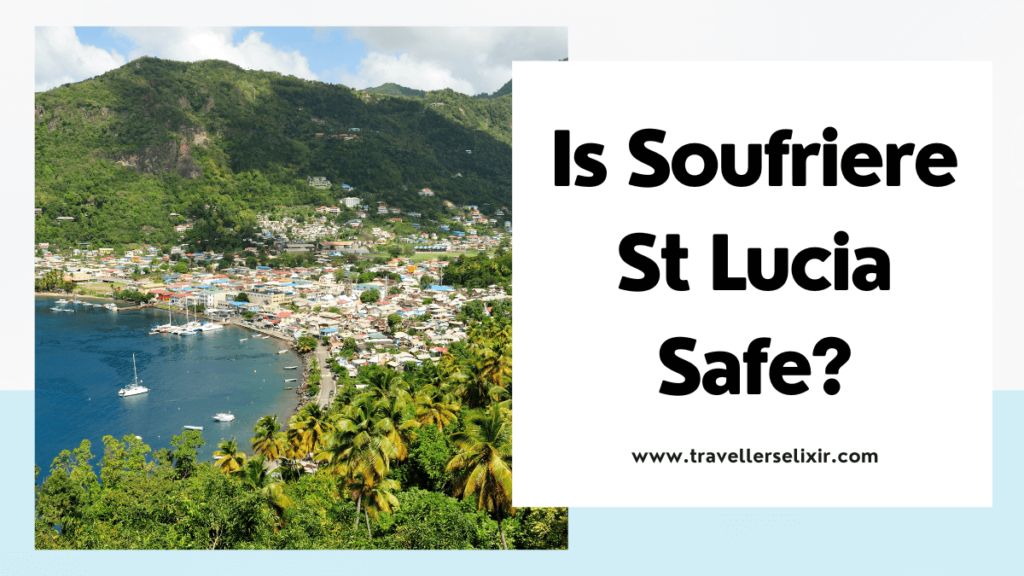 If you’re wondering if it’s safe to visit Soufriere in St Lucia then this post is for you.

When I first googled ‘Soufriere St Lucia safety’, there was no guide specific to Soufriere so I’ve spent several hours researching this topic to put together this handy guide.

This post is super honest and covers if Soufriere is safe and what you need to be aware of if you’re planning a visit.

Yes, Soufriere St Lucia is safe to visit for tourists. It’s actually one of the safest cities in St Lucia.

The city of Soufriere, which sits on the southwestern coast close to the Piton mountains, is generally safe to visit however that doesn’t mean that crime doesn’t exist.

In a hurry? Here’s an overview of safety in Soufriere:

If you’re worried about safety at all then I’d recommend booking onto a Soufriere day tour.

You’ll get a local guide who will show you around the city’s best attractions and keep you safe.

Pickpocketing is the most common crime against tourists (as it is in most cities around the world). You can prevent most instances by keeping your valuables out of sight.

Be especially on guard in busy areas or at festivals like the Carnival as this is the most common time that thieves target tourists.

For extra safety, consider wearing a money belt that goes under your shirt or if you wear a bra, consider getting one of these handy pouches that attaches to the side of your bra.

They are ideal for storing important things like credit cards, IDs and a bit of cash.

Violent crime against tourists is incredibly rare and isn’t really something you should worry about in Soufriere.

As this guide is designed to be super honest, I’ve included these examples so that you have a fully rounded view of Soufriere St Lucia safety.

It’s still worth remembering though that these instances are very rare and don’t happen often.

To put this into context, over 1 million tourists visit St Lucia every year and these two instances were the only attacks against tourists that I could find in Soufriere in the last 15 years.

Worryingly, the murder rate in St Lucia has hit an all time high recently.

It’s worth noting though that this statistic refers to St Lucia as a whole (not just Soufriere) and tourists aren’t really being targeted.

Gang violence is the main cause for the increase in murders meaning most deaths occur to locals involved in the gangs and not tourists.

Additionally, Soufriere is rarely involved so it shouldn’t really be a concern for you.

A fairly common occurrence in Soufriere is begging. Certain locals do often approach tourists to ask for money.

Most of them are friendly enough and will leave you alone if you ask them to.

Sometimes you might have to ask them a few times to leave you alone. Occasionally you’ll come across someone who is a little more persistent or even aggressive but this is rare.

Generally these people won’t harm you but it can be a bit annoying.

Aside from begging, persistent sellers are also common. They will usually try to sell you souvenirs or other local items.

This type of selling is very common in Soufriere. If you walk around town for an hour or two, it’s highly likely that you’ll be approached at least once.

Here’s what a recent traveler had to say about it:

As you can see, these sellers don’t pose much of a safety concern.

To see for yourself, check out the below video of a man walking around Soufriere and being approached by a man selling leaves.

As you can hear in the video, the seller is pretty friendly and not overly pushy. Most sellers will leave you alone if you ask them to.

Be wary of sellers offering you things as a ‘gift’ and then asking for a donation. Never accept anything from a street seller if you don’t want to pay for it even if it’s offered as free.

Although it can be a bit annoying being approached all the time, it isn’t much of a safety concern.

Try to remember that St Lucia isn’t a prosperous country and these people are just trying to make a living.

Many of the hotels in St Lucia, particularly the fancier ones, have 24-hour security guards to keep you safe at all times so theft and robbery isn’t something you need to worry about.

Muggings, street harassment and theft from hotels do however occur from time to time.

For example, I found on one forum that a woman reported her rental property being robbed.

Unfortunately these kinds of issues do happen in most countries around the world. Personally, I live in the UK and our home has been robbed twice.

I’m sure you have similar stories from your own country so it definitely shouldn’t put you off from visiting.

Villa rentals are usually safe but there have been reports of them being robbed from time to time so look into the security of your rental before booking.

If safety is your utmost concern then opt for a resort instead as they are much safer.

The best resorts in the Soufriere region for safety are the Ladera Resort and the Jade Mountain Resort as they have 24-hour security.

What Are People Saying?

I spent a lot of time reading through forums to see what people were saying about safety in Soufriere, St Lucia.

Some travelers, like the one below, said they felt safer in Soufriere than in cities like Miami or New Orleans.

Other visitors noted that they’ve visited Soufriere several times over the years and have never felt unsafe.

There were several reports of typical tourist scams including locals pretending to be car parking agents so be very wary if you’re approached in Soufriere.

You may also be approached by locals offering to be your local guide.

These people are usually harmless and will leave you alone if you ask them to (you might have to say no a few times).

I wouldn’t recommend driving in Soufriere as the roads are not great. If you do want to drive then research where to park beforehand in case anyone tries to scam you.

Don’t believe everything you hear and if it sounds strange, it likely is. By just using common sense and being cautious, you can easily avoid most scams.

Soufriere is one of the safer towns on the island however Rodney Bay in the north is generally considered to be the safest place for tourists.

I’d recommend booking onto a Soufriere full-day tour if you’re worried about safety in Soufriere at all.

You’ll explore the town and all of its best attractions with a local guide who knows the area well so you can just sit back and enjoy your day without worrying at all.

Is it Safe to Walk Around Soufriere?

Overall it is safe to walk around Soufriere in the daytime but it’s essential that you keep your wits about you and avoid flashing valuables.

Take all basic precautions that you would in any other city and you should be fine.

Here’s some basic precautions you can take to keep you safe:

It’s worth remembering that St Lucia is considered a third world country and around 20% of people there live in poverty.

As I’m sure you’re aware, poverty often leads to crime but as a whole the people of St Lucia are friendly – they appreciate tourists and the value they bring to their economy.

St Lucia’s economy relies heavily on tourism and most locals know that so they don’t want to do anything that might put tourists off from visiting.

Is St Lucia Safe for Tourists?

St Lucia, as a whole, is perfectly safe for tourists to visit. According to Statistica, around 1 million tourists visit St Lucia every single year and most visits are trouble free.

Although St Lucia is safe to visit, there are a few things you should be aware of.

Firstly, St Lucia is in the hurricane belt meaning tropical storms and hurricanes can hit the island at certain times of year.

Hurricanes in St Lucia are rare but they have occurred. In the past 37 years, only one hurricane has directly affected St Lucia.

Hurricane season runs from June until November each year. To eliminate the risk, plan your visit to St Lucia outside of this time.

St Lucia has an active volcano but this shouldn’t be of concern to tourists as its last eruption was in 1766.

They can be easily predicted so if the volcano showed any signs of erupting, the area around it would be evacuated immediately with plenty of time to spare.

Whilst it is safe to swim in the ocean in St Lucia, you do need to watch out for a few things.

Firstly, you should wear water shoes in St Lucia as there are often sharp rocks, coral and sea urchins on the seafloor.

Although shark sightings are rare in St Lucia, you may come across the occasional jellyfish.

Fortunately, the jellyfish in St Lucia are not able to fatally wound humans but they could give you a painful sting if you’re not careful.

On land, you also need to be wary of snakes. There is a poisonous snake in St Lucia called the fer-de-lance snake.

These types of snakes are rare and only live in certain areas of the island not frequented by tourists so it’s unlikely you’ll come across one.

For this reason though, you shouldn’t go off walking in remote areas on your own. Always stick to the main tourist areas.

Spiders and mosquitoes are also present in St Lucia but they don’t pose much of a risk to tourists.

Luckily, these safety concerns are minor and are unlikely to ever cause any issues on your trip to St Lucia.

Thanks for reading this post on Soufriere St Lucia safety. I hope it puts your mind at ease if you’re thinking of visiting Soufriere.

Another popular location that tourists love to explore is St Lucia’s capital Castries.

Castries is safe to visit too but again there’s certain things you need to watch out for.