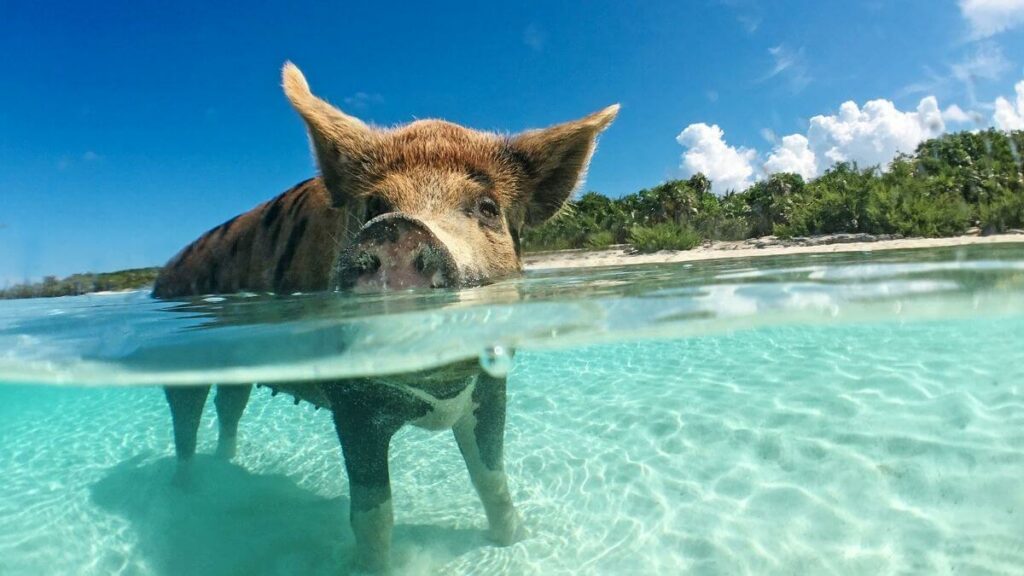 If you’re looking for the cheapest way to swim with pigs in the Bahamas then you’re in the right place.

Swimming with pigs in the Bahamas is at the top of many people’s bucket list however it is known to be a pricey excursion.

Don’t worry, if you’re traveling to the Bahamas on a budget, you can still swim with pigs and I’ll show you how.

Cheapest Way to Swim with Pigs in the Bahamas

The only place where you can swim with pigs is in the Bahamas which is why so many people really want to do it when they come here.

Specifically most people go to Big Major Cay which is one of the Exuma islands. The island is referred to as ‘Pig Island’ locally.

There you will find Pig Beach which is filled with cute pigs swimming in the clear water and playing on the golden sand.

If you’re on a budget, the cheapest way to swim with pigs in the Bahamas is to join a tour to Rose Island rather than Pig Beach in Exuma.

Rose Island is much closer to Nassau than Exuma so you can actually save up to $250 per person by going there instead!

Not many people know that you can actually see pigs in other locations in the Bahamas too. This is the best way to save money on your tour.

There are 3 easy ways that you can cut costs when booking your swim with pigs tour in the Bahamas:

I’ve done all the hard work for you and found the BEST and CHEAPEST ways to swim with pigs in the Bahamas.

Keep reading to find out more…

Cheapest Swim with Pigs Tours in the Bahamas

One of the cheapest swim with pigs tours available in the Bahamas is this one:

The reason this tour is cheaper than the others is because they don’t take you to the official ‘Pig Beach’ which is in Exuma.

Instead they take you to Rose Island instead.

Rose Island, which has a population of swimming pigs, sits just off the coast of New Providence island and it’s super easy to get there from Nassau.

As it only takes 20 minutes to get there by boat, this tour is significantly cheaper than others.

You’ll save around $200 – $250 per person by booking this tour instead of an Exuma tour and realistically, you won’t even be able to tell the difference.

Check out the pigs at Rose Island in the video below:

Find out where to see turtles in the Bahamas.

If you really have your heart set on visiting Pig Beach in Exuma, then this is the cheapest tour available:

This tour includes swimming with the famous Bahamian pigs but also you’ll get the chance to swim around with iguanas and sharks too.

The tours to Pig Beach are more expensive because they include transport to Exuma which is much further away from Nassau than Rose Island.

The cheaper options always take you to Exuma by powerboat rather than a plane.

Whilst flying to Exuma is really convenient, it’ll add an extra few hundred dollars per person onto the price.

Check out the pigs of Exuma in the video below:

💡Tip: Bring a waterproof camera like the GoPro Hero 10 to get some memorable photos and videos of you with the pigs.

How Long is the Boat Ride from Nassau to Pig Island?

One major downside to visiting Pig Island in Exuma from Nassau is that the boat trip takes over an hour each way.

If you choose to go to Rose Island to swim with pigs then it won’t take as long to get there so you’ll get more time with the pigs and less time traveling.

If you enjoy seeing pigs, you may also be interested in knowing where to see flamingos in the Bahamas.

How Much Does it Cost to Swim with Pigs in the Bahamas?

Most Pig Beach Bahamas tours cost between $450 and $570 per person but there are some cheaper tours available.

Cheaper tours usually don’t take you to the official ‘Pig Beach’ in Exuma but to other closer beaches and islands that also feature swimming pigs.

I’ve summarized the best options above.

How Did The Pigs Get There?

It’s unclear exactly how the pigs came to live on the beaches of the Bahamas as they were originally domestic.

The most likely theory is that they were dropped off by sailors who planned to come back to eat them.

Another theory is that they were the survivors of a shipwreck.

Of course, it’s also plausible that the pigs were put there on purpose as a tourist attraction.

Can You Pet The Pigs?

The pigs that you’ll find in the Bahamas are wild pigs – they’re not pets and they’re not domesticated.

That being said, the pigs are super friendly and are happy for you to swim right up to them, feed them and even give them a gentle stroke.

Of course, you need to ensure you’re treating the pigs with respect and you definitely shouldn’t try to ride them or pet them too hard.

Can You Feed The Pigs?

Feeding of the pigs is allowed but you should definitely think about what you are going to feed them.

If you feed them the wrong things it could cause harm to the pigs.

The Bahamas government has asked that tourists only feed the pigs pitted fruit and vegetables.

They also say you should only feed the pigs in the water (and not on the beach). This is because there is less chance of them ingesting sand in the water.

In the past, the pigs have been harmed by ingesting too much sand when they were being fed on the beach.

Recommended foods to feed the pigs:

Can you swim with pigs in Bora Bora too?

Thanks for reading this post on the cheapest way to swim with pigs in the Bahamas.

Swimming with Pigs in the Bahamas is on most people’s bucket list and if you’re traveling to the Bahamas then it’s something you just have to do!

There are many people traveling to the Bahamas on a budget but that doesn’t mean you can’t enjoy this exceptional, magical experience.