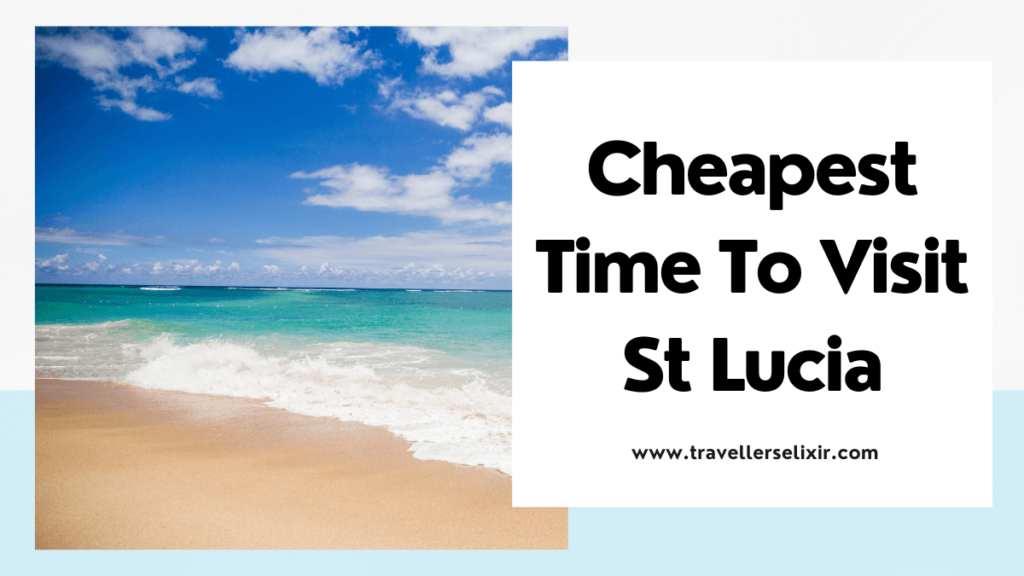 A Caribbean vacation in St Lucia is definitely within your budget with careful planning and the right timing.

The cheapest time to go to St Lucia is in September and October.

These months are the wettest, but a handful of rooms can be had for around US$50 to $US60 per night.

The official ‘wet’ season in St Lucia starts in June and lasts through to November.

Precipitation starts to build up in July and August, with September and October being the wettest months of the year.

The average rainfall is between 9 and 10 inches during these months.

Take a look at the chart below which shows the average rainfall for each month:

As a general rule, the more rainier it is, the cheaper it is to visit St Lucia.

These months are the peak of the off-season as most storms build up in the Atlantic Ocean during this time.

There is a small risk of hurricanes but these are rare. You may experience some heavy thunderstorms though during your trip.

That’s not to say that you’ll get no good weather in St Lucia during these months. It will rain from time to time but you’ll still get a decent amount of sunny days to enjoy the island.

The upside to the bad weather is that you’ll likely share the island with locals rather than fellow tourists meaning you’ll get to experience a more authentic local lifestyle.

You can hit up the best tourist spots and attractions without battling the normal crowds.

And if you come here in July, you’ll even get to jump right into the thick of the Carnival action.

💡Hint: During the St Lucia Carnival the whole island turns into a huge celebration. Expect elaborate costumes, funky beats, parades and so much more.

By November, average rainfall starts to taper off until December, which marks the start of the dry season and the return of dry weather.

During the months of September and October, rooms can be had for as low as US$50, and even lower if you choose to stay outside popular tourist centers like Castries or Soufriere.

For the same room during the low season, you’ll spend $30 to $60 less per night.

Check out the difference in the image below. I checked two different dates at La Haut Resort with one being in high season (February) and one during low season (October).

It was $59 cheaper per night to stay in October!

For the same hotel during low season, you’ll pay between $70 and $140 less per night.

I checked two different dates at the St. James’s Club Morgan Bay Resort in both high season and low season.

The rate during low season was $146 lower!

During high season, 5-star hotels are available at upwards of $600 while super luxury accommodations can easily set you back $1,000, and even higher if you want to wake up with the Pitons seemingly within reach.

You’ll easily save a few hundred dollars per night by booking during the low season.

💡Hint: Check out my guide to doing St Lucia on a budget for more money-saving tips!

The cheapest time to fly to St Lucia is in October.

It’s no lie that flights to St Lucia are expensive but you can definitely make a saving by traveling to St Lucia at certain times of the year.

To save money on flights, you’ll need to be willing to visit St Lucia during the rainy season which runs from June until November.

October is one of the wettest months and there’s an increased risk of hurricanes. For this reason, it’s the cheapest time to fly to St Lucia.

November is still wet, but by the end of the month, the official hurricane season also ends and this is also a cheap month to fly to St Lucia.

By December, St Lucia starts to look and feel more like the tropical island that you’d expect, thanks to lower average rainfall compared to preceding months and lower risk of encountering hurricanes.

The weather is drier and warmer, with averages of around 85°F, signaling the start of the dry season, which lasts until April when average rainfall falls to 3.5 inches.

As you can imagine, these months are the high season in St Lucia, with March and December being the peak season owing to spring breaks and holiday breaks in the United States, allowing families to vacation together.

It’s not unusual to pay up to $1,000 for a round-trip ticket from Los Angeles (LAX) to Hewannora International Airport (UVF) in St Lucia.

During the hurricane season, however, round-trip tickets from mainland United States can get as low as $500 (compared to the average $700), with October flights seeing the cheapest flight deals.

If you’re flying direct from one of the airline’s hubs in the United States such as Miami or Atlanta, you may even snag a sweeter deal.

When is the Best Time to Travel to St Lucia?

If your idea of an island vacation is bright sun, clear blue skies and warm weather, then December to April is the best time to travel to St Lucia.

These months get the lowest average rainfall and temperatures range from 75°F to 85°F.

Most tourists come to St Lucia to bask in the warm sun and experience adventures that are best done on sunny days.

Additionally, it’s not just tourists that come flocking to the island.

Humpback whales migrate past the island from January to April, whilst leatherback turtles nest on St Lucia shores from March to August.

Find out more about where to see turtles in St Lucia.

Birds can be spotted around the island throughout the year, but their main breeding season is between January to April.

If you love nature and wildlife, you’ll get an eyeful here during the dry season.

The views of the iconic Pitons that make St Lucia stand out among its flatter Caribbean neighbors are picture-perfect around this time too.

You don’t have to stay in a lodge nestled in between its pointy and lush peaks (although you definitely can if you have enough to spend) to admire its splendor.

Not surprisingly, December to March sees the highest number of tourists arriving on the island as these months coincide with school breaks and work holidays.

This is also the main time when cruise ships dock at Pointe Seraphine which lies within walking distance of Castries’s town center.

If you’d prefer to enjoy the island with thinner crowds and before the heavy rain comes, you’d be in a better bargaining position from April to early June while the sun is still out.

Prices may not be as cheap as in the low season, but they won’t be as high as prices during the peak season either.

If you’re wanting to save some money but don’t want the rain to ruin your outdoor plans, then the shoulder season of April to June is a good time to come.

Thanks for reading this post all about the cheapest time to go to St Lucia.

No matter which time of year you visit, you’re bound to have an amazing time.