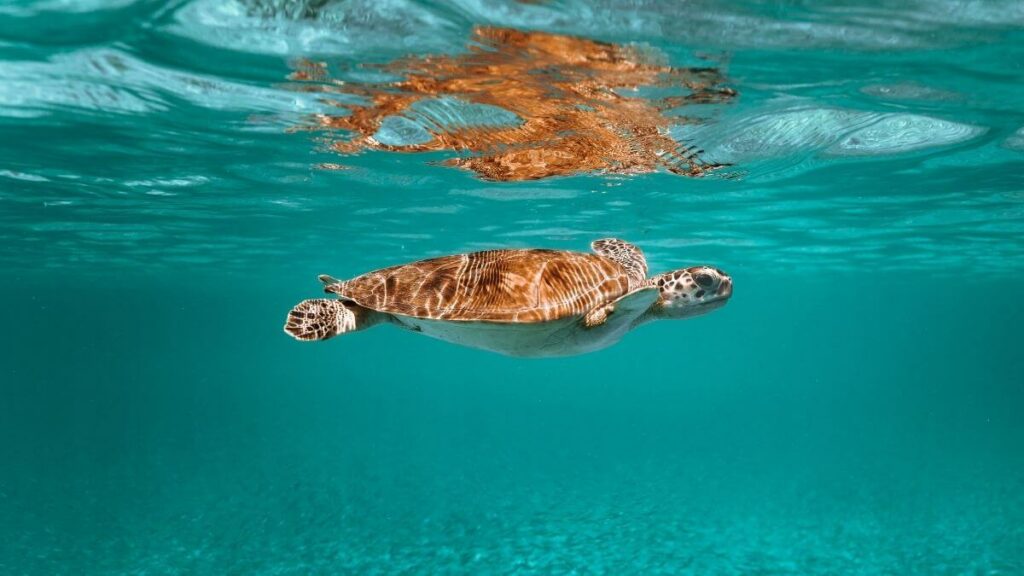 If you’re looking for somewhere to see turtles in St John then you’re in the right place.

Nothing can beat that amazing feeling of seeing a turtle up close and personal in their natural habitat! Why not try it for yourself.

This post will tell you all of the best places to swim with turtles in St John and includes all the information you’ll need for a fun day out.

Where To Swim With Turtles St John, USVI

You’ll be happy to know that there are lots of sea turtles present all over St John, which forms part of the US Virgin Islands.

Luckily, you can swim with turtles in several different places in St John.

As a quick overview, the best place to see turtles on St John is at Honeymoon Beach (more info later).

I’d recommend joining this snorkeling and kayaking tour which will take you over to Honeymoon Beach and includes a swim with turtles experience.

It’s one of the best tours available so you won’t be disappointed.

The US Virgin Islands is home to three different species of sea turtle. You are most likely to see green sea turtles and hawksbill sea turtles in St John.

Leatherback sea turtles can also sometimes be spotted but they are much rarer to see.

If you’re now wondering where to see turtles in St John, keep reading as I’ll tell you the exact spots and locations!

I have included several locations across St John and I’ve done all the hard work for you by including handy links to top rated tours.

The best place to see turtles on St John is at Honeymoon Beach which is located within the Virgin Islands National Park.

Honeymoon Beach is a picturesque white sandy beach that looks like something from a postcard and the best bit is that a large population of turtles call it home.

The best way to access the beach and swim with the turtles is to join a kayaking and snorkeling tour like this one.

You’ll be able to get super close to the turtles and even swim alongside them. I’d recommend booking a tour as the tour guides know where to find turtles without fail.

The turtles are super friendly here and are used to snorkelers so they won’t get spooked if you swim near them.

This area also has an extensive coral reef home to a variety of marine life that you can explore.

Check out how close you can get to the turtles at Honeymoon Beach in the video below:

Another great place where you can swim with turtles in St John is at Maho Bay.

Maho Bay is a favorite amongst both locals and tourists due to its beautiful white sandy beaches and towering coconut palm trees.

The middle of the shallow bay has an extensive seagrass bed which happens to be green turtles favorite food so they are frequently spotted here.

As well as turtles, you’ll be able to swim with rays, tropical fish and maybe even an octopus.

The waters here are super clear and very calm so you’ll get an excellent view of the turtles.

For the ultimate luxury experience, you can book a private full-day boat charter and explore St John at your own leisure.

This tour is completely customisable so you can choose where your guide takes you – I’d recommend visiting Maho Bay for some time with the turtles.

Check out the beautiful sea turtle spotted at Maho Bay in the video below:

Another great spot for swimming with turtles in St John is at Francis Bay which is located just north of Maho Bay.

Francis Bay is a bit quieter than Maho Bay and it’s ideal if you are looking for some peace and quiet. It has a super laid back vibe.

Many people start their day snorkeling at Francis Bay then work their way south towards Maho Bay (Maho Bay has one of the biggest turtle populations on the island).

The best place to see turtles is along the rocks which are located on the right side of the bay.

As well as turtles, you’ll be able to see a wide variety of tropical fish, rays and other marine animals.

Check out one of the amazing sea turtles of Francis Bay in the video below:

Another great place where you can swim with turtles in St John is at Waterlemon Cay which is located in Leinster Bay.

Waterlemon Cay is perfect for snorkeling as it has a healthy seagrass bed and vibrant corals.

In fact, Waterlemon Cay is often considered to be one of the best snorkeling spots on the island.

Check out the sea turtles at Waterlemon Cay in the video below:

Another one of the best places to see turtles in St John is at Hansen Bay which is located at the eastern tip of the island.

There’s so much to see at Hansen Bay including sea turtles, conchs, stingrays, soft corals and a wide range of tropical fish.

As Hansen Bay faces the south, it is protected from large waves meaning the bay here is very calm so it’s an excellent snorkeling spot for beginners.

Check out the sort of sights you can expect at Hansen Bay in the video below:

Another place where you can swim with turtles in St John is at Haulover North located on the East End of St John.

Haulover North is great for intermediate and advanced snorkelers but should be avoided if you’re a beginner due to the strong currents.

There’s so much to see underwater at Haulover North including a wide variety of corals, colorful fish, sea turtles, sharks and lobsters.

The beach and shore at Haulover North is super rocky (not sandy) and may hurt your feet as you walk on the beach and enter the water.

Make sure you bring along some snorkel boots like these to prevent the rocks from hurting your feet.

Another place where you can see sea turtles in St John is at Cinnamon Bay which is actually St John’s longest beach.

The best place to go snorkeling is around the small cay that sits just off the beach. It features dramatic rock crevices which are home to lots of coral and fish.

The far eastern side of the beach is also a great spot for snorkeling and you’re highly likely to spot turtles here.

Cinnamon Bay is often ranked as one of the most beautiful and pristine beaches on St John.

Check out the beautiful sea turtles in Cinnamon Bay in the video below:

Another place where you can go swimming with turtles in St John is at Salt Pond Bay which is located on the southern end of the island.

This protected cove is one of St John’s most popular snorkeling spots and you can often spot turtles there (as well as lots more marine life).

You will need to hike a little bit to reach Salt Pond Bay as it sits away from the road. The hike is totally worth it though as the beach is stunning.

Due to the hike required to reach the beach, it’s never overcrowded with tourists meaning you can just enjoy your time with the turtles without fighting the crowds.

Check out the video below which shows a sea turtle spotted at Salt Pond Bay:

Another great place where you can swim with turtles in St John is at Scott Beach at Caneel Bay.

This beach is super quiet and not many people know about it so you won’t have to fight the crowds to see the turtles here.

Turtles aren’t the only thing you’ll find at Scott Beach. This paradise beach is also home to stingrays, spotted eagle rays, nurse sharks and even the odd dolphin.

Turtle populations have skyrocketed at Scott Beach in recent years. This is mainly because the area was closed off to the public for some time due to a hurricane in 2017.

As the turtles were left undisturbed, the population was able to flourish meaning there are more turtles there than ever before.

Did you know you can also swim with turtles in St Thomas, USVI?

Best Time Of Year To See Turtles In St John

You can see sea turtles at any time of year in St John, USVI. This is because the island has a resident population of sea turtles that live there all year.

The sea turtles love to feed on the seagrass and live amongst the reefs (all of which are present on St John).

The best time of day to see turtles in St John is early morning or late afternoon as this is when the turtles are most active.

Why not use these fun snorkeling Instagram captions for any photos you post from your stay in St John?

To ensure the turtles remain safe, there’s a few key things to bear in mind when swimming with them in St John, USVI.

To get you prepared for your trip to St John where you’ll hopefully see some beautiful sea turtles, here’s some fun turtle facts.

Thanks for reading this post on where to see turtles in St John, US Virgin Islands.

St John is a great place to go swimming with turtles due to the abundance of healthy seagrass beds.

There’s plenty of beaches all over St John where you have a super high chance of spotting a turtle.