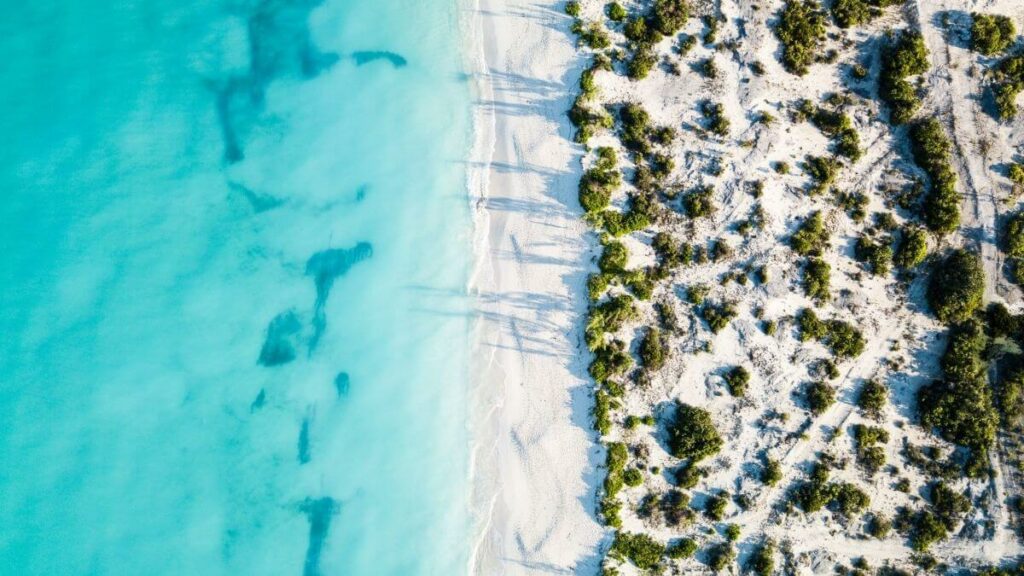 If you’re looking for somewhere to see turtles in Providenciales then you’re in the right place.

This post will tell you all of the best places to see turtles in Providenciales and includes all the information you’ll need for a fun day out.

Does Turks and Caicos Have Sea Turtles?

Yes, Turks and Caicos does have sea turtles.

In fact, it is one of the best places in the world to swim with turtles due to its large turtle population and healthy coral reefs.

The most common types of turtles found in Turks & Caicos are the green, hawksbill and loggerhead turtles.

For the best chance of swimming with turtles, I’d recommend joining this snorkeling tour from Grace Bay Beach.

The experienced guides know where to find turtles without fail and you’ll be able to spend plenty of time in the water getting to know the turtles.

It’s so beautiful to watch the turtles effortlessly gliding through the crystalline waters and observing them foraging for food.

Check out my complete list below for more information on where else you can see turtles in Providenciales.

Where Can I See Turtles in Providenciales, Turks & Caicos?

There are many places in Providenciales where you can see turtles.

Keep reading to find out EXACTLY where to swim with the turtles. I’ve also included handy links to the best rated tours.

I would recommend booking online in advance as the tours often sell out and you also tend to get a better rate online.

The best place to see turtles in Providenciales is at Grace Bay Beach which is located on the northeast coast of the island.

To get a chance of seeing turtles here, you will need to get out onto the water as the turtles rarely come close to the shore.

I’d recommend joining a snorkeling tour like this one where you’ll cruise around Grace Bay in a double-decker catamaran before jumping into the water for some snorkeling.

The experienced guides will take you to the best snorkeling spots where you’ll have the highest possible chance of seeing turtles.

They even take you out to Little Water Cay where you can spot iguanas. Cool, right?!

Check out the beautiful sea turtle spotted at Grace Bay in the video below:

Another one of the best places to see turtles in Providenciales is at Mangrove Cay which is a small, uninhabited island located just off the northeastern coast of Providenciales.

This 286-acre uninhabited island is made up almost entirely of red mangroves which are intersected by water channels.

The best way to explore Mangrove Cay is by joining a clear-bottom kayaking tour. These make it super easy for you to spot turtles as the kayak is fully transparent and it’s super fun.

Whilst kayaking around Mangrove Cay, you’ll be able to get up close to wildlife including fish, turtles, coral, rays, small sharks and more.

Check out what you can expect from Mangrove Cay in the video below:

Leeward Reef is one of the most popular snorkeling sites in Turks & Caicos due to its beautiful underwater views.

To reach Leeward Reef you will need to join some sort of tour as it’s not close to a beach and there is no other way to get there.

Below I’ve summarized the best tours to Leeward Reef:

This tour also includes a barbeque lunch and stops at several other fantastic snorkeling reefs in Turks & Caicos.

This tour would be perfect for someone who wants to see as much marine life as possible because you’ll spend most of your day in the water. It lasts around 8 hours.

On this 4 hour tour, you’ll sail out into the water enjoying the scenery then make several stops at top snorkeling locations including Leeward Reef.

This tour is perfect for those who only want to do a half-day tour but still want to see plenty of marine life.

This tour is a private tour so it will be just you and your group. It’s ideal if you want to escape the crowds and get some quality time with your friends/family.

This tour is 4 hours and is actually flexible meaning you can choose what activities you do.

Another place where you can swim with turtles in Providenciales is at Pine Cay.

This 800-acre secluded private island mainly features a luxury resort and a few private homes but is also a top snorkeling location.

The best way to reach Pine Cay is by joining this full-day snorkeling tour which takes you all over Providenciales to the best snorkeling spots.

Pine Cay is the last stop of the day so make sure you save some energy as it’s one of the best ones.

If you prefer, you can also book a private boat tour and personalize your own itinerary. This way you can spend as much time as you want at Pine Cay and fit in some other activities too.

Another place where you can see turtles in Providenciales is at Coral Gardens Reef, also known as The Bight Reef.

The Coral Gardens Reef is actually the most popular snorkeling site in Turks & Caicos. This does mean it can get very busy though.

This excellent snorkeling reef is close to the beach meaning it is easy to access. All you need to do is paddle out a little bit from the beach and you’re there!

This reef consists of one main coral ridge which extends 350 feet out from the beach.

You’ll be able to see a range of tropical fish, turtles and rays here.

It’s common to spot both green turtles and hawksbill turtles here swimming around looking for food or gliding up to the surface for some air.

As they are accustomed to regular snorkelers, the turtles here tend to be more approachable than those at other reefs.

Check out what you can expect from this reef in the video below:

You can also see turtles at French Cay if you don’t mind traveling a little bit further out from the main island of Providenciales.

This secluded island sits 18 miles south of Providenciales and is the only island in Turks & Caicos where you can’t see any other island from its shores.

The 22-acre island is actually a protected wildlife sanctuary and also has some of the best dive sites in Turks & Caicos.

Due to its location on the south wall of a barrier reef, it gets significantly more light than other reefs meaning there’s more visibility and more vibrant coral.

As well as swimming with turtles, French Bay is one of the best places to see sharks.

Gray reef sharks are the most common type but you can also sometimes see nurse, hammerhead, bull, lemon and tiger sharks.

You can also see several wrecks on the horizon from French Cay.

This extensive coral reef is known for its colorful and exotic sea life. It is made up of several different reefs and coral heads so there’s lots to explore.

You’ll usually find the turtles amongst the grassy areas foraging for food.

The reef is easily accessible from the beach.

Check out the video below which shows what you can expect from Smith’s Reef:

Best Time Of Year To See Turtles In Providenciales

You can see turtles in Providenciales year round.

This is because there is a resident population of turtles that live in the waters surrounding Providenciales so you can see them at any time of year.

Whilst they can be seen year round on Providenciales, summer is the best time for all marine life as the water is warmer.

To ensure the turtles remain safe, there’s a few key things to bear in mind when swimming with them in Providenciales.

To get you prepared for your trip to Providenciales where you’ll hopefully see some beautiful sea turtles, here’s some fun turtle facts.

Thanks for reading this post on where to see turtles in Providenciales, Turks and Caicos.

Turks and Caicos is actually one of the best places to swim with turtles in the whole world and you have a great chance of seeing turtles here.

Make sure you bring along your underwater camera so you can snap some cool photos of you with the turtles.