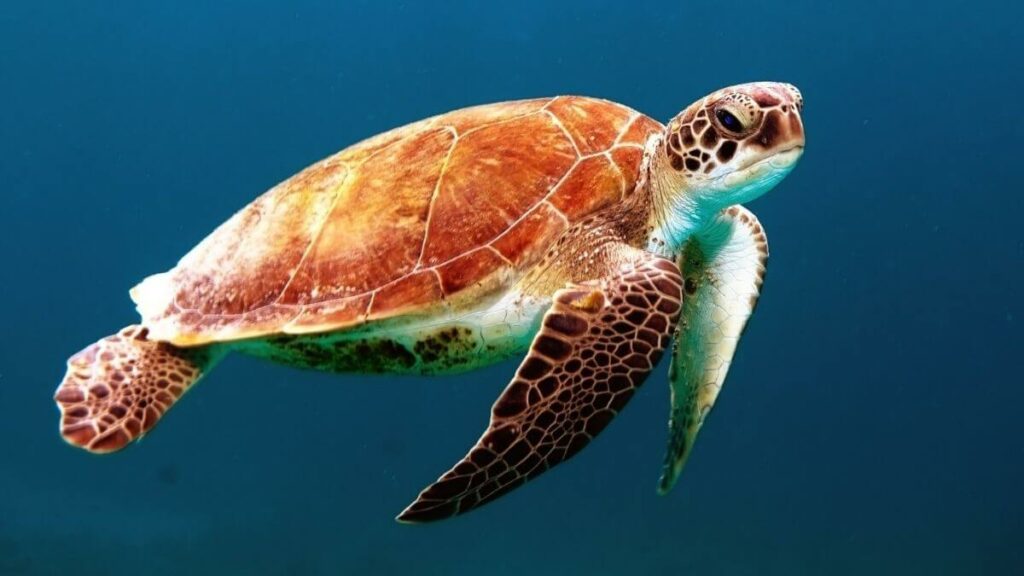 If you’re looking for somewhere to see turtles in Gran Canaria then you’re in the right place.

This post will tell you all of the best places to see turtles in Gran Canaria and includes all the information you’ll need for a fun day out.

Are There Turtles in Gran Canaria?

Yes, there are turtles in Gran Canaria.

The most common type of turtle found here is the loggerhead turtle which is actually one of the largest types of turtle.

As well as loggerhead turtles, leatherback and olive ridley turtles can also be spotted each year too.

In Gran Canaria, the turtles rarely come close to the shore so you will have to get out onto the water to have a chance of seeing them.

I recommend joining this boat tour from Puerto Rico de Gran Canaria which cruises around the island looking for turtles, dolphins and whales.

It’s one of the best tours available and has tons of amazing reviews so you’ll definitely not be disappointed.

If you want to swim with turtles in Gran Canaria then you may prefer this guided kayaking tour which includes a snorkeling activity.

Keep reading to find out the exact spots and locations where you can see turtles in Gran Canaria.

One of the best places in Gran Canaria to see turtles is the resort town of Puerto Rico situated on the southwest coast of Gran Canaria.

Puerto Rico is one of the island’s most popular towns and for good reason. It features sandy beaches and turquoise waters, what’s not to like?

If that wasn’t enough, turtles also love to hang around in the ocean which surrounds this beachy town and it’s not uncommon to spot one if you go out into the sea.

For the best chance of seeing turtles, I’d recommend joining this boat tour which cruises around the Gran Canaria coast in search of dolphins and whales.

You will also be able to see turtles, flying fish and other marine life on this tour. They even include an optional swim stop where you can jump into the ocean yourself.

A boat tour is your best option if you really want to see turtles in Gran Canaria as the turtles rarely come close to the shore.

For something a little bit different, you can also join a jet ski tour and see turtles this way too!

Another place where you can see turtles in Gran Canaria is in the Bahía de Santa Águeda.

This small bay on the southern side of the island features a range of beaches including El Pajar and Playa de la Montaña de Arena.

You can often spot turtles swimming around in the bay, gliding up to the surface for air or foraging for food.

For the best chance of seeing them, I’d recommend joining a guided kayaking tour like this one.

This tour starts at El Pajar where your guide will take you across the bay to the Montaña area, looking out for turtles as you go.

This bay is also a great location to try out snorkeling. This tour also includes a snorkeling activity which gives you a chance to swim right alongside the turtles.

For something a little bit different, you can see turtles at the Poema del Mar Aquarium Turtle Hospital located in Las Palmas on the northeastern tip of the island.

Not only that, their turtle hospital works with the local government to protect injured turtles.

Unfortunately, it’s not uncommon for turtles to get caught in nets, plastic bags or be injured by fishing hooks.

The turtle hospital rescues and takes care of these injured turtles until they are healthy enough to be released back into the ocean.

You are able to visit their turtle tank and see the current patients that they are taking care of. The turtle tank is expertly designed to mimic their natural environment.

Check out what you can expect from this aquarium in the video below:

Another place where you can swim with turtles in Gran Canaria is at Tufia, a quiet Spanish village located on the eastern side of the island.

This scenic beach features black sand and a beautiful backdrop of whitewashed houses.

Tufia is one of the best diving sites on the island as it is home to a wide variety of marine life. Expect to see flatfish, lizard fish, sting rays and the occasional turtle too.

The best place to go diving here is on the right side of the beach as the marine life is more varied compared with the left side.

The dive site itself was created by a volcanic eruption which created various caves and structures underwater that provide a good habitat for marine animals.

Check out the beautiful sea turtle spotted whilst diving at Tufia in the video below:

Best Time Of Year To See Turtles In Gran Canaria

You can see turtles at any time of year in Gran Canaria.

There is a resident population of turtles which call the Canary Islands home so no matter what time of year you visit Gran Canaria, you will hopefully be able to spot some turtles.

To ensure the turtles remain safe, there’s a few key things to bear in mind when swimming with them in Gran Canaria.

To get you prepared for your trip to Gran Canaria where you’ll hopefully see some beautiful sea turtles, here’s some fun turtle facts.

Thanks for reading this post on where to see turtles in Gran Canaria.

Gran Canaria is a great place to spot turtles and nothing beats seeing these glorious turtles in their natural habitat.

Did you know you can also see turtles in Crete?