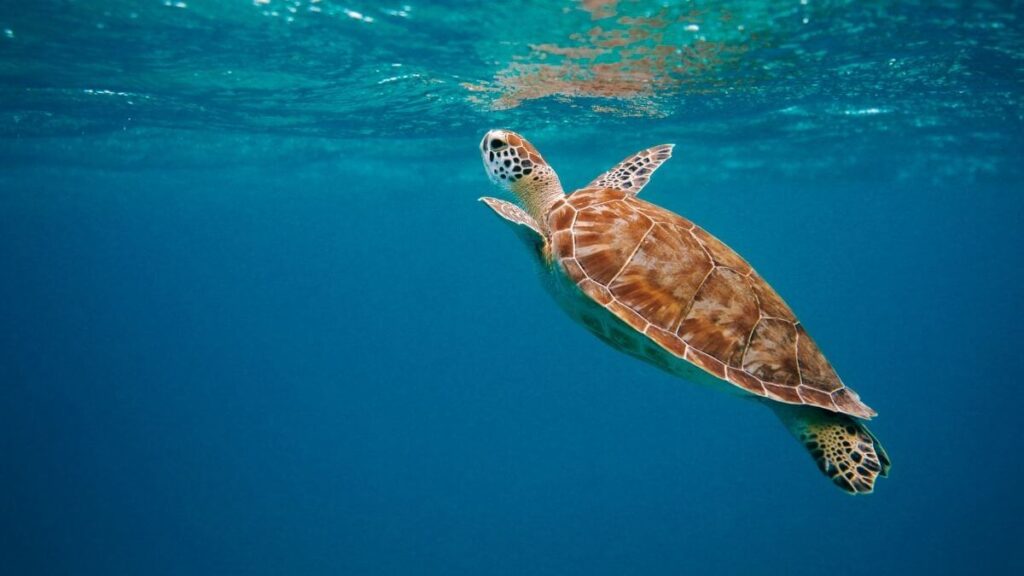 If you’re looking for somewhere to see turtles in Curacao then you’re in the right place.

Are There Turtles in Curacao?

Yes, there are lots of turtles present in the waters surrounding Curacao.

The most common species of turtle that you’ll see in Curacao is the green sea turtles although several other species can be spotted here.

These include hawksbill turtles, loggerhead turtles and the occasional leatherback turtle.

So where can you see them for yourself?

The most popular activities which allow you to swim with turtles in Curacao are snorkeling and diving.

One of the only places where you are guaranteed to be able to swim with turtles in Curacao is at Playa Piskado.

As this turtle beach is a little bit out of the way, I’d recommend joining this top rated swim with turtles snorkeling tour as they pick you up from your hotel and take you to the beach.

If you’re looking for a day trip then book a boat tour to Klein Curacao (a little island just off Curacao) and swim amongst turtles in a shipwreck! More details on this later.

Swimming with turtles in Curacao is a magical experience that you’ll never forget.

It’s so beautiful to watch the turtles effortlessly gliding through the crystalline waters and observing them foraging for food.

But there are other places in Curacao where you can see turtles.

Check out my complete list below for more information on where you can see turtles in Curacao and the best turtle beaches in Curacao.

The best place to see turtles in Curacao is at Playa Piskado, also known as Playa Grandi.

Playa Piskado is a small beach located on the northwest side of Curacao. It’s less than an hours drive from the city of Willemstad.

Playa Piskado is hands down the best place to swim with turtles in Curacao. It’s so easy to spot turtles here that, in fact, you’ll have trouble NOT seeing one.

I’d recommend joining this turtle snorkeling tour which includes hotel pickup and takes you right to the beach.

It also includes a stop at Grote Knip Beach which is consistently ranked as one of the most beautiful beaches in the Caribbean.

‘Playa Piskado’ actually translates to ‘Fisherman’s Beach’. Just beyond the pier, you’ll find fishermen in their boats casting their nets into the ocean.

The fisherman usually discard scraps of fish into the ocean and this attracts lots of fish and sea turtles!

It’s a beautiful beach with crystal clear water making it super easy to spot the turtles.

Tip: Bring an underwater camera like the GoPro Hero 10 to get some photos and videos of you with the turtles.

Check out the video below to see the beautiful turtles of Playa Piskado and the sort of sights you can expect:

Another great place where you can swim with turtles in Curacao is at Klein Curacao.

I’d recommend joining this full-day boat tour to Klein Curacao as it also includes a swim with turtles experience.

Whilst swimming with turtles at Klein Curacao, you also get the chance to swim around a shipwreck and a healthy coral reef!

The shipwreck is teeming with turtles and other marine life so it’s super fun to explore.

The island is a perfect day trip because, as well as the shipwreck and snorkeling site, there is also an old lighthouse and a half-mile long white sand beach.

As the island is uninhabited, it has a beautiful, unspoilt feel to it. Everything here is very natural, meaning you can see the turtles in the best way possible.

As Klein Curacao is off the mainland, the only way to get there is by boat and I’d recommend booking your tour in advance to ensure you get a place as the tours are super popular and often sell out.

Check out the beautiful sea turtle spotted whilst snorkeling at Klein Curacao in the video below:

Another one of the best places in Curacao to see turtles is Playa Lagun, a beach located in northwest Curacao.

This turtle beach is surrounded by rocky cliffs which line a long, narrow channel. The channel provides a home for a huge variety of fish, seahorses, starfish, lobsters, sea turtles and more.

It’s a popular diving and snorkeling site due to its healthy coral reef and sponges all teeming with marine life.

One place where you can often observe mother turtles laying eggs and baby turtles hatching in Curacao is on the beaches of Shete Boka National Park.

The 6-mile northern coastline has 13 small cove-like beaches and these are where the turtles come to lay their eggs.

When the nests hatch around 45 days after being laid, lots of baby turtles will scramble across the beach, making their way into the ocean for the first time.

For the best chance of seeing the turtle nests, I’d recommend joining this tour to Shete Boka National Park.

The knowledgeable guides have been doing this for years and know where to find turtles without fail – you might struggle to find them on your own as the national park is huge.

This tour is also great because they make a stop at both Playa Piskado and Playa Lagun so you get the chance to swim with turtles too.

Imagine the tiny turtles poking their way out of their eggs and imagine being part of it yourself.

The babies face more challenges than ever including:

Some of these baby turtles struggle to make it to the ocean because of this and need extra help from volunteers and so you may sometimes see turtle nests marked and taped off.

One of the key feeding areas at this national park is Boka Ascension so head there for the best chance of spotting a turtle.

Another place where you can see and swim with sea turtles in Curacao is at Caracasbaai Beach.

The beach itself is made of hard sand and pebbles but it is a super popular spot for snorkeling and diving.

You can commonly find sea turtles swimming around in the bay here.

Another place where you can go swimming with turtles in Curacao is at Playa Porto Marie.

It is unique in the fact it has a double reef which you can access easily from the shore. This is a fantastic snorkel and dive site.

To ensure the turtles remain safe, there’s a few key things to bear in mind when swimming with them in Curacao.

To get you prepared for your trip to Curacao where you’ll hopefully see some beautiful sea turtles, here’s some fun turtle facts.

Thanks for reading this post on where to see turtles in Curacao.

There are lots of turtle beaches in Curacao which give you the chance to swim alongside the turtles and observe them in their natural habitat.

Don’t forget your waterproof camera so you can capture some memories to take home with you.