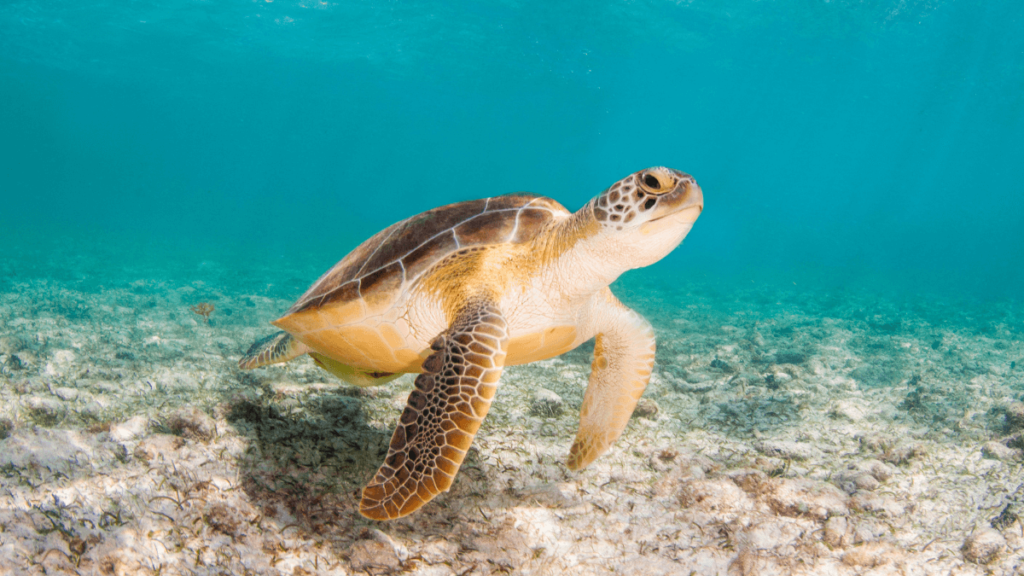 If you’re looking for somewhere to see turtles in Bermuda then you’re in the right place.

Nothing can beat that amazing feeling of seeing a sea turtle up close and personal in their natural habitat! Why not try it for yourself.

This post will tell you all of the best places to see turtles in Bermuda and includes all the exact spots and locations where you can find these amazing creatures.

Where To See Turtles In Bermuda

Bermuda is an ideal habitat for sea turtles as it has shallow coral reefs, lush seagrass beds and clean, unpolluted waters.

In fact, Bermuda is one of the few places on Earth where the sea turtle population is thriving.

The most common species of sea turtle present in the waters around Bermuda are the Green Turtles and the Hawksbill Turtles. Both of these species are endangered.

For the best chance of swimming with turtles in Bermuda, I’d recommend joining this glass-bottomed kayak tour!

Unfortunately, Bermuda is not a location where sea turtles regularly hatch but they do love to swim around and spend much of their early adult life in and around Bermuda.

If you’re now wondering where to see turtles in Bermuda, keep reading as I’ll tell you the exact spots and locations!

One of the best and most fun places to see sea turtles in Bermuda is at Daniel’s Head.

Just northwest of Daniel’s Head is a partially submerged shipwreck called HMS Vixen. The bow of the boat lies just above the water.

This area is covered in seagrass and coral making it the perfect place for turtles. The only way to get to HMS Vixen is by joining a tour.

The most popular one is the glass-bottomed kayak tour which will take you to see HMS Vixen as well as the surrounding seagrass beds and coral reefs where the turtles hang out!

This tour is perfect if you don’t want to get wet but still want to see the ship and the turtles that live in the area. You can observe them from the comfort of your kayak.

If you’re a bit more adventurous and want to get into the water itself, then join this kayak and snorkeling tour instead.

You’ll not only see Vixen’s shipwreck but also be able to go snorkeling in the seagrass and search for turtles yourself. It’s a truly magical experience that you’ll never forget.

One of the best places to find sea turtles in Bermuda is the Cooper’s Island Nature Reserve.

Enjoy the island and explore this nature reserve by joining the Bermuda Beach Hop Experience.

This tour takes you to Bermuda’s top 5 beaches, ending the day at the scenic Cooper’s Island Nature Reserve where you’ll be able to see and swim with the turtles.

From the nature reserve you’ll have access to some of Bermuda’s best beaches including Turtle Bay, Clearwater Beach and Long Bay.

These beaches feature shallow water seagrass beds which are the ideal habitat for green turtles so you can usually spot turtles here pretty easily.

Clearwater Beach in particular is one of the best places in Bermuda to find sea turtles. You can easily access this beach from the nature reserve.

Another great place where you can see sea turtles in Bermuda is at Hog Bay Beach.

This hidden beach is part of Hog Bay Park which covers 32 acres of land on the west side of the island.

This beach is very unknown and not that many people know about it so you’ll likely have it to yourself!

It’s not easy to find and you can’t see it from the park. It can only be reached by following a hiking trail in Hog Bay Park.

This beach is perfect for swimming and snorkeling and you can often see turtles swimming around in the waters.

Make sure you visit this beach during low tide as sometimes it disappears completely during high tide.

You can check the times of high and low tide on the Tide Forecast website.

How To Get To Hog Bay Beach, Bermuda

As mentioned, Hog Bay Beach isn’t easily found and it can’t be seen from the park itself.

When you arrive at the entrance, take the left trail. There should be a small sign that says ‘walking trail’. It’s easy to miss so keep your eye out for it.

There’s another trail on the right which leads to an abandoned house so avoid this one.

You’ll then have to walk down a trail which passes by fields and forests for around 20 minutes. The trail does get steep at times but overall it’s not a difficult hike.

Eventually the trail will lead you down to the shoreline where you’ll find the secluded Hog Bay Beach.

Another place where you can often see sea turtles in Bermuda is in the waters around Ferry Reach and Coney Island. These waters are just north of the Causeway.

One great turtle spotting location around here is Ferry Point Park at Ferry Reach. Green turtles can often be spotted along the north shore on calm days.

There are lots of seagrass beds surrounding both Ferry Reach and Coney Island – this is where you’ll find the turtles.

Best Time Of Year To See Turtles In Bermuda

You can see turtles in Bermuda year round.

The turtles like Bermuda because there are loads of seagrass beds all around the island and this is what turtles eat.

For this reason, it doesn’t matter what time of year you visit Bermuda as you’ll definitely be able to spot the turtles any time.

To get you prepared for your trip to Bermuda where you’ll hopefully see some beautiful sea turtles, here’s some fun turtle facts.

Find out where to see turtles in Antigua.

History of Sea Turtles in Bermuda

This is something you can do in other places like Mexico (I have guides on where to see baby turtles hatching in either Tulum or Cabo San Lucas).

Centuries ago in the early 1600s, Bermuda had tons of Green Turtles and they laid their eggs on Bermuda’s beaches.

One interesting feature of these turtles is that they always return to the same breeding grounds at the same time every year to lay their eggs.

This means that when the baby turtles grew up, they would always return to Bermuda’s beaches to lay more eggs.

After the island was settled in 1609, the settlers started eating the meat of the turtles and eventually, in the late 1700s, the entire population of green turtles was eradicated.

Strict laws were put in place to prevent the killing and eating of turtles and today the turtle population in Bermuda is thriving.

Thanks for reading this post on where to see turtles in Bermuda.

Nothing beats seeing these glorious turtles in their natural habitat.

Bermuda is actually one of the best places in the whole world to see turtles due to its largely untouched landscape, lush seagrass and healthy coral reefs.