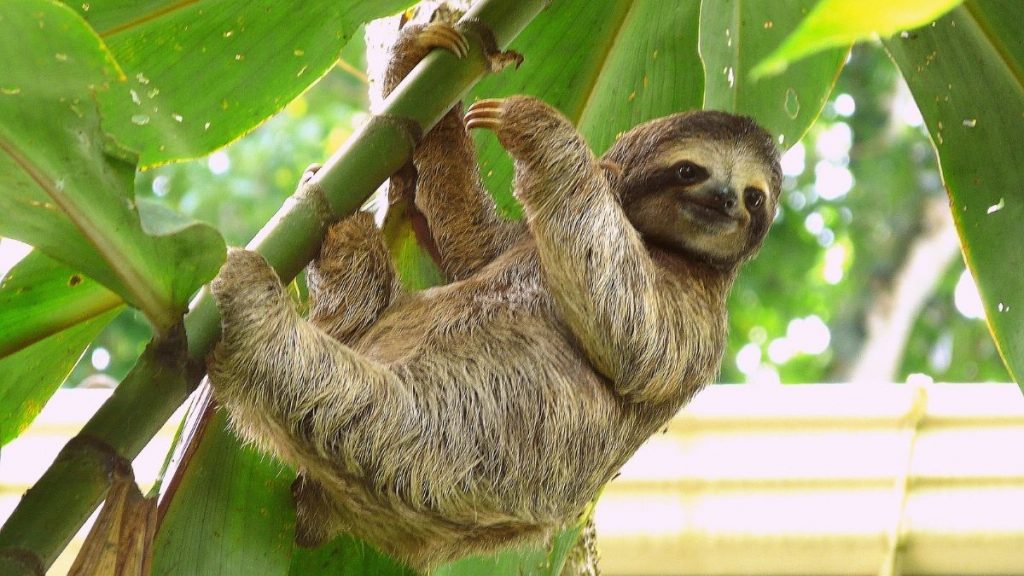 If you’re looking for somewhere to see sloths in California then you’re in the right place.

Whether you just want to see a sloth or you’d like to meet one up close, you can do all of that in California in Los Angeles, San Diego, San Francisco and more.

Some of them even have sloth encounters where you can meet and feed a sloth one-on-one.

There are many zoos and wildlife centers across California that have sloths.

Some also allow you to get up-close with the sloths and even take a selfie with them!

Don’t worry, I’ve covered all the details below.

One of the best places to see sloths in California is at SeaWorld San Diego.

SeaWorld is an exciting theme park and marine zoo. As well as roller coasters and rides, they have lots of animals at the park including sloths.

The sloths at SeaWorld San Diego are two-toed sloths. The sloths can be found right in the center of the park near the Dolphin Days area.

You can get up close and personal with the sloths at SeaWorld San Diego by booking a sloth encounter. You can even take a selfie with them.

Check out the sloth encounter with Tess the two-toed sloth at SeaWorld San Diego in the video below:

Another great place where you can see sloths in California is at San Francisco Zoo.

San Francisco Zoo is home to over 2,000 exotic, endangered and rescued animals including Southern two-toed sloths.

They can usually be observed here hanging from a canopy where they spend the majority of their time.

Opening Times: Monday to Sunday, 10am to 5pm

You can see a sloth at San Francisco Zoo in the video below:

Los Angeles Zoo is another great place to see sloths in California.

You can meet the zoo’s resident Linné’s two-toed sloth, Charlie. He can usually be seen hanging from a tree.

To get the most out of your trip to Los Angeles, you can purchase a Los Angeles City Pass which gives you admission to all of Los Angeles’s top attractions including Los Angeles Zoo.

Opening Hours: Monday to Sunday, 10am to 5pm

You can see Charlie, LA Zoo’s resident sloth, in the video below:

Another place where you can often see sloths in California is at San Diego Zoo.

San Diego Zoo currently has two-toed sloths which occasionally make special appearances. They are not consistently on display at the zoo so it’s best to call and check ahead.

Sloths can regularly be seen as part of the zoo’s ‘Animals in Action Experience’. This experience gives visitors the chance to go behind the scenes and meet the zoo’s animals up-close.

To get the most out of your trip to San Diego, you can purchase a San Diego City Pass which gives you admission to all of San Diego’s top attractions including San Diego Zoo.

Check out the video below which shows a baby sloth at San Diego Zoo:

Did you know you can also see crocodiles and alligators in California?

Another great place in Los Angeles where you can see sloths is at the Wildlife Learning Center.

The Wildlife Learning Center is a zoo located in San Fernando Valley. It looks after over 100 animals that have either been displaced, rescued or born in a zoo.

They have two-toed sloths at the zoo.

For an extra special experience, you can book onto the Sloth Social Animal Experience where you get to enter the sloth enclosure and meet them up close. You’re even able to snap a selfie with them.

Whilst general admission is only available on Tuesdays and Thursdays, you can book tours of the zoo any day of the week.

These interactive tours give you the chance to meet, feed and touch some of the zoo’s many animals.

Opening Hours: Tuesdays and Thursdays (general admission), 10am to 5pm

Check out the video below which shows the Sloth Social Animal Experience:

Another great place where you can see sloths in California is at Sacramento Zoo, located in William Land Park in Sacramento.

Covering over 14-acres of land, Sacramento Zoo currently cares for over 500 animals including two-toed sloths.

At Sacramento Zoo you can see the zoo’s resident Linné’s two-toed sloth, Edwina.

Edwina came to the zoo in 1992 and has been ‘hanging’ around ever since. Her favorite snack is sweet potato.

If it’s a rainy day, then don’t worry because Edwina is one of the zoo’s only animals that loves playing outside in the rain!

Opening Hours: Monday to Sunday, 9am to 5pm

Another zoo in California that has sloths is SeaQuest Folsom, a hands-on zoo aquarium in Folsom just a 30 minute drive from Sacramento.

At SeaQuest you get the chance to touch, feed and interact with animals from all over the world including sloths.

Book onto the Sloth Interaction to be able to hang with a two-toed sloth named Flash.

During the sloth encounter you will be able to feed the sloth, take photos with it and learn more about them from the zookeepers.

This activity at SeaQuest Folsom is one of the best sloth encounters in California.

Check out the Sloth Interaction at SeaQuest Folsom in the video below:

Another great zoo in California that has sloths is Santa Ana Zoo.

This 20-acre zoo, located in Santa Ana, focuses on caring for animals that are native to Central and South America. The zoo is just a short 30 minute drive from Los Angeles.

Santa Ana Zoo has over 120 different species and 350 individual animals including two-toed sloths.

The sloths can be found on Monkey Row along with the zoo’s monkeys and lemurs.

Opening Hours: Monday to Sunday, 10am to 4pm

Check out the sloths at Santa Ana Zoo in the video below:

Monterey Zoo is another zoo where you can see sloths in California, located 2 hours south of San Francisco.

Monterey Zoo allows you to get up-close and personal with lots of fun wild animals including sloths.

At Monterey Zoo you can sometimes meet Chloe, the zoo’s resident sloth. Chloe is known to be extremely needy and she loves to hang on tightly to her keepers.

The sloth at Monterey Zoo is only used in some educational programs and tours so she may not always be on display at the zoo.

If you really want to see Chloe, I’d recommend calling ahead of time to check.

Opening Hours: Monday to Sunday, 10am to 3pm

Thanks for reading this post on where to see sloths in California.

Wherever you are in California, there’s plenty of options here to see sloths in Los Angeles, San Francisco, San Diego and more.