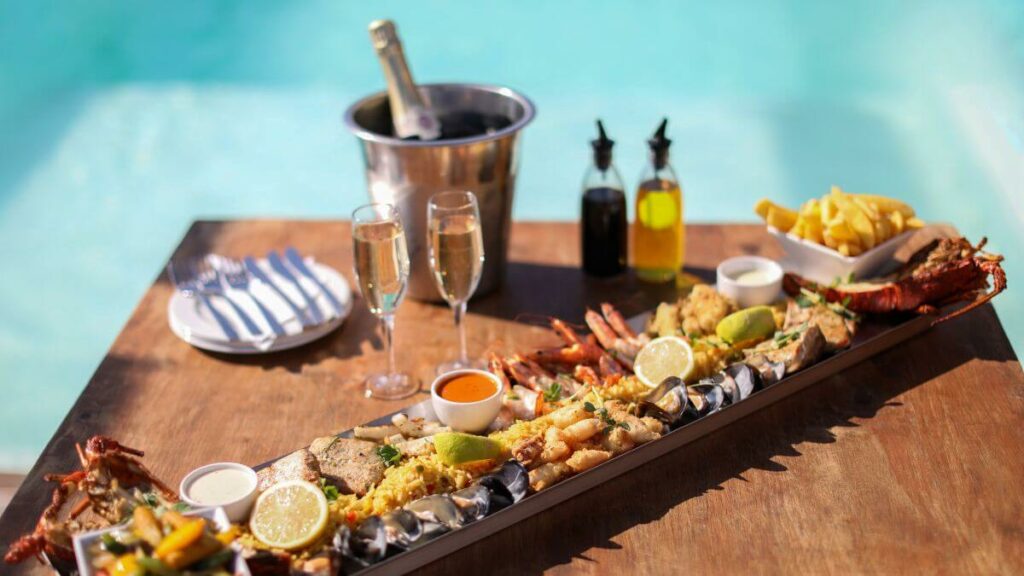 Standing proudly in the heart of French Polynesia, Bora Bora has long served as a haven for both adventurous souls and serenity seekers.

It offers astonishing natural beauty, luxurious hotels, and romantic vibes like no other place on earth.

Not to forget its lush cuisine, which has been influenced largely by France, has impressed many taste buds over the years.

But what kind of food do they eat in Bora Bora? Does cheese rule most of their plates like French cuisine or do they cook their meals in banana leaves like in Tahiti? Let’s find out!

What Kind of Food Do They Eat in Bora Bora?

Bora Bora cuisine is an infusion of many cultures, making it diverse enough to satisfy every taste.

It’s mostly dominated by seafood because of the island’s geographic place on the map, and one of its most famous dishes goes by Poisson Cru.

Poisson Cru is a plate of raw fish, most commonly tuna, that’s been marinated in coconut milk and lime juice.

The meat is served cold with a salad of onions, cucumbers and tomatoes, making Poisson Cru a refreshing plate for locals and tourists.

Cooking hot plates in Bora Bora is largely influenced by its Pacific nature, as locals use underground ovens and hot volcanic stones to cook food.

First, they wrap their meat in leaves so that it comes out tender. Next, they leave the food to cook in the oven for a few hours and then they serve it alongside some vegetables or fruits.

One of the best plates cooked in an underground oven is Poulet Fafa. It’s a delicious alternative for people who don’t eat seafood and don’t want to miss out on the tropical experience.

Besides meat, Bora Bora is famous for its exotic fruits like papaya, mangos, and bananas. It also has an array of mouth-watering desserts like Firi Firi donuts and papaya purees.

In Bora Bora, every traditional plate contains at least one type of freshly caught fish or tropical fruit, sometimes both.

Many traditional plates there are also available throughout the islands of French Polynesia, where imported goods come and go between islands.

One of the most famous dishes that you can find in French Polynesia is Fafaru. Fafaru consists of crushed shrimps, tuna, and parrotfish.

It’s known for its distinctive aroma and unusual taste and, to be honest, not many tourists are fans of it.

French Polynesia cuisine, in general, is largely influenced by French and Asian cuisine. It depends largely on fishing, which is logical considering the 121 islands that make up French Polynesia.

The most common types of fish there are tuna, parrotfish, swordfish and jackfish.

For people who dislike seafood, they can try Australia-imported high-quality lamb and beef. Chicken is also widely available in Bora Bora but it is mostly imported from the United States.

As for fruits, they’re what to eat in Bora Bora if you’re looking for a unique and refreshing taste.

Some of the most famous are bananas, breadfruits, noni fruits, coconuts, and papayas. Other fruits that don’t grow in Bora Bora are imported from other French Polynesian islands.

Since Bora Bora’s weather isn’t suitable for growing most vegetables, locals depend on tropical vegetables like taro, also known as Polynesian potato, for cooking.

They use taro leaves to wrap food and cook it. As for the roots, they serve them as the main ingredient in many traditional dishes.

Check out my Bora Bora tipping guide to work out how much you’ll need to leave for a tip when eating out in Bora Bora.

Does Bora Bora Have Good Food?

Yes, Bora Bora’s flavorsome cuisine has been a tourist attraction for decades. It satisfies most tastes as it includes fish, chicken, and other meats.

For vegans and vegetarians, the island has its fair share of delicious tropical fruits and local vegetables but you may find the selection limited.

Halal food in Bora Bora is also difficult so you’ll have to stick to vegetarian dishes.

The main downside to Bora Bora dining is that the food there is on the pricey side of the market. So if you plan on going there, you’ll need to put aside a decent sized budget for food.

For more information on pricing, check out my guide on how much food costs in Bora Bora.

It’s also worth remembering that you don’t need to go to a fine dining place every night.

There are many snack bars and roulottes in Bora Bora and all of the French Polynesian islands that serve budget-friendly food.

So, overall, you shouldn’t worry about eating in Bora Bora.

Here’s a map of my top 3 restaurant picks in Bora Bora:

Here’s a list of the best places to eat in Bora Bora.

Bloody Mary’s is a world famous restaurant that Bora Bora tourists are lucky to have.

Everything about this place is iconic, from its authentic tropical decor to its mouth-watering dishes.

Not only that, but it has a wall of fame filled with the celebrities who visited it and fell in love with what it serves including Pierce Brosnan and astronaut Buzz Aldrin.

Its five-course menu consists mostly of authentic plates that belong to French cuisine with a touch of tropicality.

Because of its romantic seating arrangement and decor, La Villa Mahana is a favorite destination for honeymooners.

It’s also one of the busiest restaurants on the island as it only allows seven couples each night so be sure to book in advance for this one.

Inside the St Regis resort in Bora Bora lies one of the most luxurious restaurants in the entirety of French Polynesia.

Lagoon by Jean-Georges is built over a lagoon and designed in a way that lets you watch fish swim underneath you as you eat your dinner.

The menu consists of French and Asian plates with iconic entrees that might dent your wallet but will leave you longing for more.

All in all, dining in the Lagoon Restaurant is a once-in-a-lifetime experience and one that shouldn’t be missed.

Hint: You don’t need to be staying at St Regis to attend this restaurant!