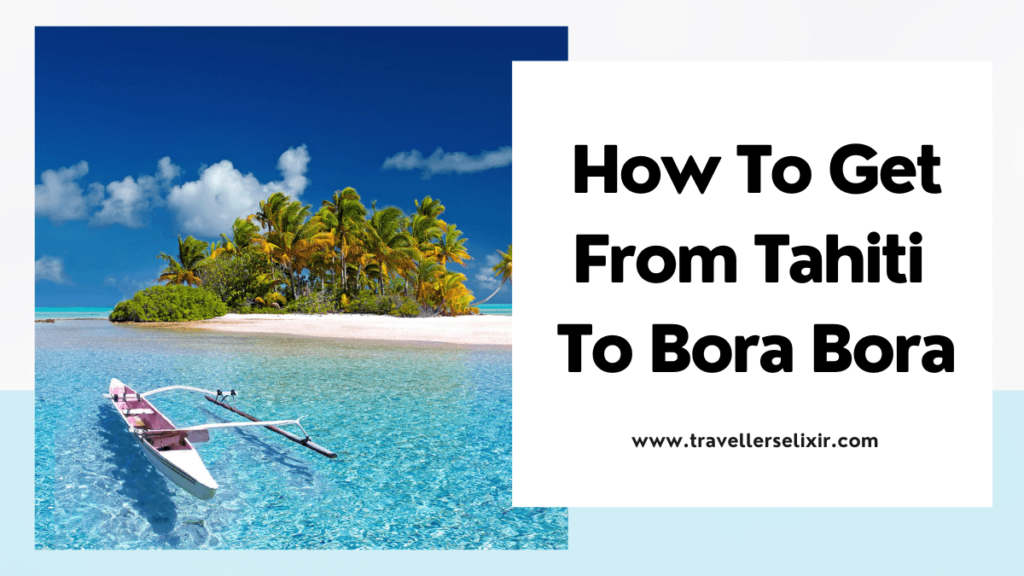 Wondering how to get to Bora Bora from Tahiti? You’re not the only one.

Every international flight to French Polynesia arrives in Tahiti so if you’re visiting Bora Bora then you’ll need to figure out how to get there.

This post about getting from Tahiti to Bora Bora includes how to get from Papeete to Bora Bora, the exact schedules, prices and everything else you need to know.

How Far is Tahiti From Bora Bora?

Check out the handy map below which shows where Tahiti and Bora Bora are in relation to each other:

Overall, Tahiti is fairly close to Bora Bora as they are both located in the country of French Polynesia.

Not sure where the vacation? I compared Tahiti vs Bora Bora to help you decide.

How To Get From Tahiti To Bora Bora

The cheapest way to get from Tahiti to Bora Bora is by ferry however it is much more inconvenient and takes significantly longer.

In a hurry? Here’s a quick overview of the two options:

Keep reading for more detailed information on how to travel from Tahiti to Bora Bora including the exact schedules, how you can save money and more.

Flights From Tahiti to Bora Bora

Flying is the fastest and most efficient way to travel from Tahiti to Bora Bora.

There are between 2 and 7 daily flights from Tahiti to Bora Bora. It varies each day however on most days there are around 5 flights.

Most of the flights leave in the morning between 6:00 AM and midday. There are a few afternoon flights but these are rarer.

You will need to take the flight from Tahiti to Bora Bora with Air Tahiti as it is actually the only carrier that flies this route.

Please be aware that Air Tahiti has a strict baggage allowance which they do enforce. They will weigh both your checked luggage and your personal belongings so make sure you don’t go over.

This is strictly enforced due to plane size.

How Long is the Flight From Tahiti to Bora Bora

The flight time from Tahiti to Bora Bora is 50 minutes.

How Much is a Flight From Tahiti to Bora Bora?

I checked Skyscanner for the current pricing and here’s what I found:

I checked tons of different dates throughout the year and the absolute cheapest price I could find for this route was around $185.

This price is rare and usually only comes up if you’re traveling during low season though (December to March).

Prices tended to be at the higher end of the scale during high season which runs from May until October or if you’re booking really last minute (within 2 weeks of departure).

The highest price I could find was $239 and this was for a booking just a few days out from departure.

💡Tip: I often use Skyscanner when booking flights as they collate all the deals and show you the absolute best price on the internet. It’s definitely saved me a ton of money over the years.

How to Save Money on Flights

There are several easy ways that you can save some money on your flight from Tahiti to Bora Bora.

I’ve included a method for those just visiting Bora Bora and for those who will be island hopping around French Polynesia.

You’ll be able to save some money by booking a return ticket. This only works if you’re just visiting Bora Bora (and no other French Polynesian islands) during your trip.

If you book a return flight then the average cost is between $328 and $395 per person. Booking the 2 flights separately would have cost around $420 so that’s a decent saving.

Flights as cheap as $328 can only really be found during the low season (December to March) and the more expensive flights of up to $395 are mainly found during the high season (May to October).

For more flight-saving tips, check out my complete guide on how to save money on flights.

This tip could save you a significant amount of money if you’re wanting to visit more than one island in French Polynesia on the same trip.

These passes include flights to several different Polynesian islands. If you’re visiting 2+ islands then it might be cheaper to purchase a pass instead of individual flights.

There are several different options available depending on which islands you want to visit.

The cheapest pass which includes Bora Bora is the Bora Bora Pass. This pass also includes airfare to Moorea, Huahine, Raiatea and Maupiti so is ideal for island hopping.

The cost of the Bora Bora pass varies depending on the season.

Check out the pricing chart below for the Air Tahiti Bora Bora Pass:

Please note that a child ticket can only be used for anyone aged between 2 and 11. Air Tahiti doesn’t offer passes to any child under 2 years old.

There are also different Air Tahiti passes available if you’re wanting to visit some of the other lesser-known islands like Tikehau and Fakarava but these cost slightly more.

Check out the full range of Air Tahiti passes here.

Another option for getting from Papeete, Tahiti to Bora Bora is by taking the ferry.

The boat ride from Tahiti to Bora Bora is fairly comfortable and the ferries are very modern and have lots of seating.

Papeete is Tahiti’s capital and it’s where all flights into French Polynesia land.

The boat from Papeete to Bora Bora leaves from the Papeete Ferry Terminal which is just a 10-minute drive from the airport so you can easily grab a taxi.

The main downside to the ferry route is that it takes a long time (I’m talking 8hrs+).

In addition, the ferries to Bora Bora only depart from Tahiti 3 days a week.

💡Quick Tip: Although the ferry is long, it gives you a great opportunity to see some other French Polynesian islands from the deck of the boat.

If you don’t mind the lengthy journey then in the steps below, I detail exactly how you can take the ferry from Tahiti to Bora Bora.

The ferry from Tahiti to Bora Bora takes 8 hours and 40 minutes.

You will need to take the Aremiti 5 ferry with Apetahi Express as this is the only ferry that goes from Tahiti to Bora Bora.

Please note that this ferry has 4 stops with Bora Bora being the final stop. The ferry stops at Huahine, Raiatea, Tahaa and finally Bora Bora.

You can book a ferry ticket on the Apetahi Express website. Please note that the website is in French. Most web browsers will give you an option to translate it into English automatically.

The Tahiti to Bora Bora boat only leaves 3 times a week.

Ferries from Tahiti to Bora Bora only depart on Wednesdays, Fridays and Sundays. Additionally, there is only one departure on each of these days.

This means that if you want to travel by ferry to Bora Bora from Tahiti, you’ll need to arrive into Tahiti on one of these days.

If you arrive any other day of the week (Monday, Tuesday, Thursday, Saturday) then you’ll either have to fly to Bora Bora or you’ll have to stay overnight in Tahiti.

Here’s the timetable for the ferry:

I personally would recommend staying over one night in Tahiti anyway after your flight.

This gives you time to get some rest after your long journey and takes away any stress if your flight happens to be delayed.

Additionally, you can explore Tahiti a little if you have time which is super fun.

💡Tip: My favorite super affordable hotel close to the Tahiti airport is the Tahiti Airport Motel. It’s ideal for a one-night stay and definitely won’t break the bank.

Cruise From Tahiti to Bora Bora

If taking a flight or ferry sounds like a bit too much and you’re looking for something more relaxing then have you considered a cruise?

There are several cruises that start in Tahiti and cruise around French Polynesia visiting islands like Bora Bora, so you’ll get a chance to see the islands without the stress of figuring out transportation.

Here are some of my top cruise picks:

These cruises also give you the chance to see plenty of other Polynesian islands along the way including Moorea, Huahine, Raiatea, Rangiroa and more.

Thanks for reading this post all about transportation from Tahiti to Bora Bora.

As all international flights fly into Tahiti, it can be confusing figuring out how to get to Bora Bora from Tahiti.

I know I found it difficult, which is why I put together this ultimate guide to help others doing this journey.