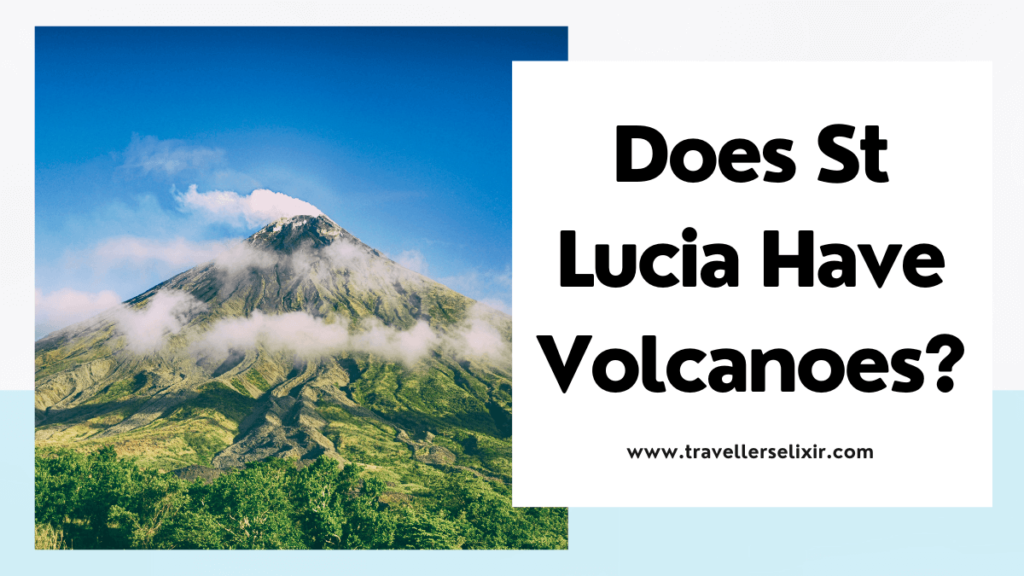 If you’re visiting St Lucia soon then you might have heard that St Lucia has volcanoes. Is it true?

This post tells you everything you need to know about St Lucia’s volcanoes including the last eruption, what you can expect and how you can see them for yourself.

Does St Lucia Have A Volcano?

Yes, St Lucia has a volcano. It is located in the Soufriere Volcanic Centre near the town of Soufriere in southwest St Lucia.

The Soufriere Volcanic Centre, which is also known as Qualibou, is a large volcanic crater that was formed between 32,000 and 39,000 years ago.

Here’s the location of the volcano on the map:

How Many Volcanoes are in St Lucia?

St Lucia has just one volcano which is known locally as the Soufriere Drive-In Volcano. It’s located inside the Soufriere Volcanic Centre.

This type of volcano is known as a ‘caldera’ which means it’s a large volcanic crater. These tend to be formed when a major eruption causes the mouth of the volcano to collapse.

As you can see, this type of volcano doesn’t have a peak.

Is the Volcano in St Lucia Active?

Yes, the Soufriere Drive-In Volcano in St Lucia is an active volcano. It is currently set to alert level green which means that the volcano is quiet and there’s no unusual activity.

Whilst it is possible that an eruption could occur in the future, there have been no recent eruptions.

The volcano itself has also become a tourist attraction due to the presence of hot springs and a natural mud bath nearby.

Tourists can actually get into the mud bath (which allegedly has restorative properties) and relax.

Although technically an eruption, this event was described at the time as ‘a minor explosion which spread a thin layer of cinders far and wide’.

During this eruption, only ash and rocks erupted from the volcano.

Although it is possible that the Soufriere volcano could erupt in the future, volcanoes don’t erupt suddenly without warning.

There are normally several clear signals that indicate an eruption may occur.

If these are observed then the area surrounding the volcano will be immediately evacuated and there is plenty of time to get everyone to safety.

It’s also worth knowing that the main tourist areas in St Lucia, including Rodney Bay, Gros Islet and Castries, are not anywhere near the volcano.

This means that even if there was an eruption, these parts of St Lucia wouldn’t be affected.

The Soufriere volcano in St Lucia has become a popular tourist attraction in recent years.

It is known locally as the Soufriere Drive-In Volcano because you can actually drive through the crater itself in your car. Cool, right!?

In fact, this volcano is the only drive-through volcano in the whole world so it’s pretty unique.

The Sulfur Springs is an active geothermal area located within Soufriere’s volcanic crater.

In this area, you’ll be able to see hot steam rising up from the ground with puddles of bubbling mud.

Here’s what you can expect:

Be prepared for a strong smell of rotten eggs though due to the presence of sulfur!

A couple of hundred yards down from the Sulfur Springs, you’ll find the mud bath.

The water here is hot but it is cool enough for tourists to enter and have a bath. Before getting into the water you’ll be able to cover yourself in the mud then wash it off as you enter the water.

Some people in St Lucia claim that the mud has medicinal properties.

Allegedly the mud detoxifies the body and can heal things like sunburn, eczema, arthritis and sore joints.

After you’ve covered yourself in gray mud, take a dip in the bath. The water reaches 113ºF (45ºC) so it’s pretty hot but there are several different pools with different temperatures.

The water in the pool is clear so it washes the mud off easily. They also have showers on site too to wash yourself down.

The gray color of the mud is caused by high concentrations of sulfur, iron and copper in the water.

Check out what you can expect from the St Lucia mud bath in the video below:

Are the Pitons in St Lucia Volcanoes?

The Pitons in St Lucia are not volcanoes however they are the remnant of heavy volcanic activity that occurred hundreds of thousands of years ago.

Technically, the Pitons are volcanic plugs which means that they were formed from lava that blocked the neck of the volcano and solidified.

The Pitons are actually one of the world’s largest volcanic plugs.

The Pitons have become an icon of St Lucia and you can’t leave without seeing them at least once.

There are several fantastic locations that have a view of the Pitons including viewpoints, beaches, hiking trails and hotels.

St Lucia’s volcano is pretty impressive but it can be a hassle figuring out transport if you don’t have a rental car.

That’s why I recommend booking a volcano tour where transport is included to and from your hotel.

You’ll get to explore the Soufriere Drive-In Volcano and take a dip in the mud bath (if you want).

Following this, you’ll also get to see St Lucia’s famous Toraille Waterfall up close and personal as well as see the iconic Piton mountains up high from the Tet Paul Nature Trail.

Everything is sorted for you so you can just sit back, relax and enjoy your day!

Thanks for reading this post on St Lucia’s impressive drive-in volcano.

It certainly is one of the best things to do in St Lucia as is snorkeling. Did you know that Sugar Beach is a great snorkeling spot?