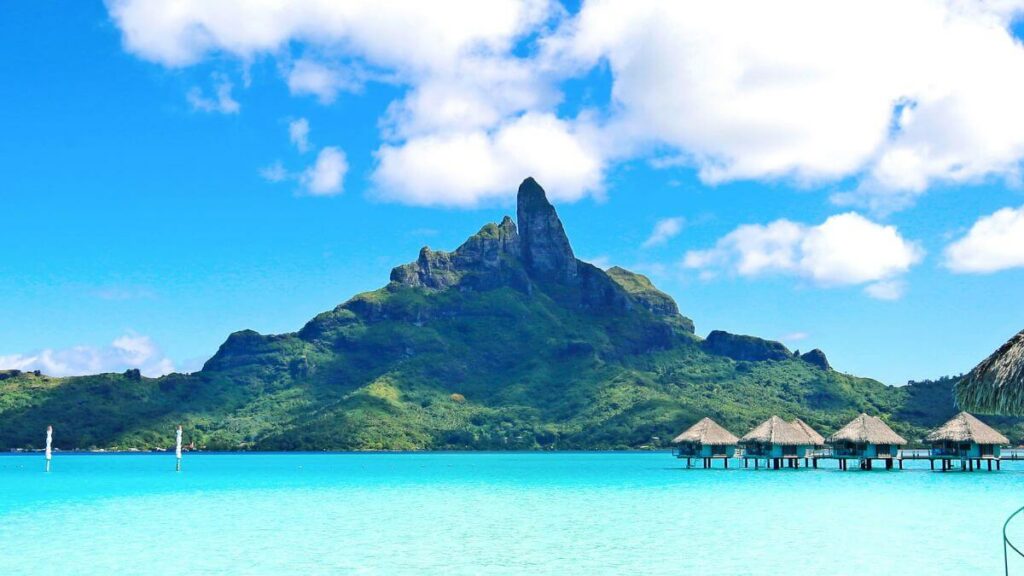 Mount Otemanu is the symbol of Bora Bora. Covered in green leaves and standing tall in the center of the island, Bora Bora’s extinct volcano is hard to miss.

But did you know that you can hike it? Well, you can!

Here’s my ultimate guide to hiking Mount Otemanu including how long it takes, how hard it is and what to expect.

Can You Hike Mount Otemanu?

Yes, you can hike Mount Otemanu.

There are several different hikes you can do in Bora Bora but by far the most impressive is the Mount Otemanu hike.

As Bora Bora’s highest point, it’s definitely not a walk in the park but you will be rewarded at the end with some spectacular views!

The hike will take you up to the shoulder region of the mountain (about halfway up) where you’ll find a huge cave that can be seen from ground level.

Mount Otemanu Hike – What to Expect

Mount Otemanu stands at 727 meters tall. Unfortunately, it’s not possible to hike all the way to the peak of the volcano due to loose rocks and steep verticals.

You can definitely hike up to the ‘shoulder’ areas of the volcano and this still provides a pretty impressive view of Bora Bora and its iconic blue lagoon.

The hike starts off at a moderate intensity but gets harder the higher up you get. In total, it’s a 4km trail. The final 30 minutes of the climb is very intense so make sure you’re prepared for this.

As you get closer to the shoulder area of the mountain, you will need to heave yourself up using some ropes which have been installed on the steepest parts.

It’s worth it though as the views at the end are breathtaking! You’ll get a panoramic view of the whole island including the blue lagoon, neighboring islands and the lush green vegetation.

Do I Need a Guide?

Although it is technically possible to do this hike without a guide, I wouldn’t recommend it.

There is some difficult terrain and not many signs so it’s best to go with a guide. Ask the reception desk at your hotel for packages or book a guide via Polynesian Island Tours.

Your guide will also usually tell you all of the interesting myths and legends about the volcano which is super fun.

The hiking route starts off at the base of Mount Otemanu with you trekking through an overgrown area which then leads you up the northeastern side of the mountain.

You’ll walk along winding trails as you scale the mountain, getting steeper and steeper until eventually you need the help of the strategically placed ropes to pull yourself up to the highest point.

You’ll also find several viewing platforms on the way up to the top.

Make sure you look out for the old American WWII cannons which are scattered around as well as some ancient-looking altars that remain from old Polyensian temples.

The Cave of Mount Otemanu

When you reach the shoulder region of Mount Otemanu, you’ll get to the Anau Cave.

Anau Cave on Mount Otemanu sits on the northeastern side of the mountain and is the highest point that hikers are able to reach.

This cave is said to be the resting place of ancient Polynesian kings and queens from many years ago.

Bora Bora had a royal family until 1895 when the last Queen, Teriimaevarua III, was forced to abdicate by the French when they took over the country.

The views from the cave are incredible as you can see all the way over to the neighboring islands of Taha’a and Ra’iatea.

You can also see the blue lagoon and the lush green vegetation all around.

Some guides will tell you that the cave is haunted but the views from up here are definitely worth the risk.

You can also go inside the cave where you’ll find colossal volcanic walls which rise up to nearly 20 meters. It’s pretty impressive.

This awesome cave makes Mount Otemanu one of the best Bora Bora hiking trails as it’s such a treat to see at the end of a strenuous climb.

How Long Does it Take to Hike Mount Otemanu?

This includes hiking up the volcano and coming back down. Super fit, experienced hikers may be able to conquer it in a slightly shorter time.

How Fit Do You Need to Be to Hike Mount Otemanu?

The hike up Mount Otemanu isn’t easy and is fairly strenuous so you do need to be moderately fit to do it.

Don’t worry, you don’t need to be an athlete to do this hike but you do need to have a decent level of fitness.

Most people will be absolutely fine but you will have to put in some effort. It can get quite strenuous at certain points towards the end.

The hike also gets steadily harder and harder as you ascend the mountain.

Towards the end of the hike, you’ll need to use the ropes which have been placed along certain points to help you on the steepest points.

You’ll need to be able to pull yourself up using the ropes to get to the cave.

Do not attempt this hike if you can’t deal with heights or suffer from vertigo.

It’s also super important that you wear appropriate clothing and footwear when doing this hike.

Check out the video below for a visual representation of the trail. Skip to 3:00 to see how steep the rope sections of the hike are.

Here’s a few quick tips to bear in mind if you’re thinking of hiking Mount Otemanu on your Bora Bora vacation:

Need some help packing for your trip? I wrote an insanely detailed Bora Bora packing list to make sure you don’t forget anything important.

Mount Otemanu’s last eruption is estimated to have occurred over 3 million years ago.

Today, Mount Otemanu is an extinct volcano. The lush green peak that remains is just the remnant of an ancient volcano which hasn’t been active for millions of years.

In fact, Bora Bora itself was actually formed from erupting volcanoes around 7 million years ago.

Whether you’ve decided to climb Mount Otemanu or not, it’s always a good idea to find out more about Bora Bora’s most iconic landmark.

Did you know: The US left behind 8 large cannons in Bora Bora, all of which can still be seen today.

Thanks for reading this post all about the Mount Otemanu hike and what you can expect if you choose to climb it.

Climbing Mount Otemanu is a hugely rewarding experience so if you’re able to, I highly recommend you try it out. It’s one of the best Bora Bora hiking trails.