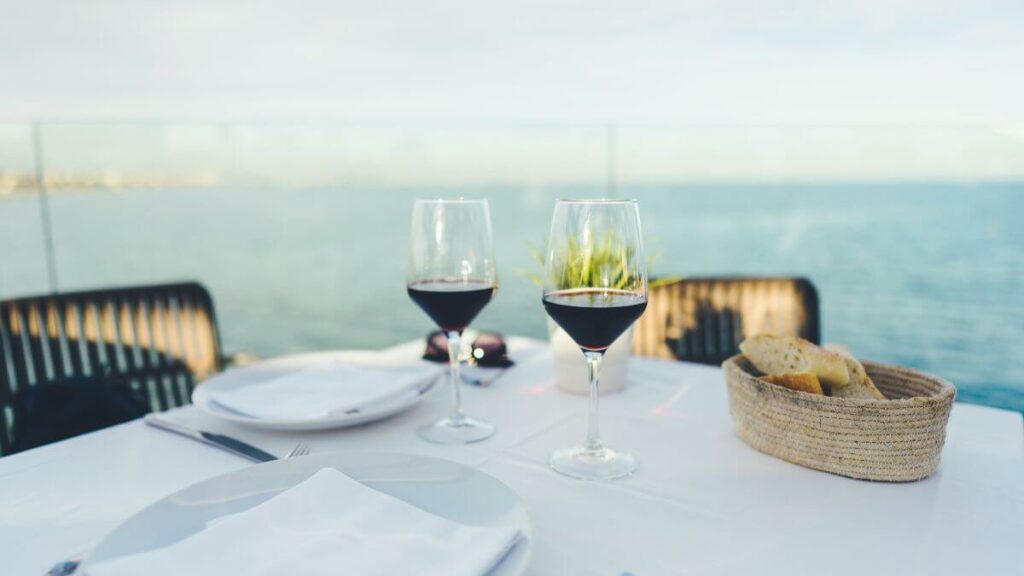 If you’re visiting Bora Bora soon then you might be wondering ‘how much is food in Bora Bora?’.

You’re not the only one. That’s why I’ve put together this ultimate guide which includes Bora Bora food prices, restaurant prices and more.

I’ve even included a list of restaurants in Bora Bora with prices, resort restaurant prices, some cheap-eat options and even a list of grocery store prices.

The cost of food in Bora Bora will depend entirely on where you choose to dine.

There are some super expensive restaurants where you’ll easily spend over $100 per person and some cheap eats where you can grab dinner for $15 per person.

In general, dining in a restaurant on the main island is cheaper than dining at one of the resorts. You do have to factor in the cost of transportation to the main island though.

Many of the hotels (and some of the restaurants too) offer a free shuttle service to get you to and from your resort.

The above prices are the average prices for most restaurants across Bora Bora.

There are plenty of more affordable options where you’ll spend way less than the above (more on this below).

In general, food prices in Bora Bora are very expensive. For 2 people at most restaurants, you can easily end up paying between $200 and $300 and sometimes even more.

There’s many popular restaurants that have fantastic food but they do charge a premium. These include St James, La Villa Mahana, Bora Bora Yacht Club and more.

There are also some cheaper places to eat if you’re on more of a budget (more on this later).

At a standard restaurant on the main island, these are the average restaurant prices in Bora Bora:

These costs are the average for a standard restaurant. Some expensive fine dining restaurants charge more. I’ve covered costs of specific restaurants later in this post.

As a rough estimate, you’ll pay between $100 and $150 per person at a fine dining restaurant. This can be even more if you opt for expensive wine.

💡Tip: Tipping isn’t customary in Bora Bora but you can tip if you receive fantastic service. Check out my tipping guide to Bora Bora for more information.

To help you budget your trip more specifically, here are some restaurants in Bora Bora with prices.

One of Bora Bora’s most popular fine dining restaurants is St James which is located in Vaitape.

Here are the average prices for food at St James Bora Bora:

St James is a great restaurant and one of the most affordable if you’re looking for fine dining.

Getting there can be a pain though so that’s why I’d recommend joining this relaxing sunset cruise which will pick you up right from your resort and take you to St James Restaurant and back.

This makes the evening much less stressful. You can simply sit back and relax and let your guide take care of everything else including your restaurant reservation.

Here are the average prices at La Villa Mahana:

La Villa Mahana is one of Bora Bora’s most expensive restaurants. You can save a bit of money by ordering from the a la carte menu rather than ordering one of the set menus.

If you’re wanting to cost up your meal when you get there then make sure you ask the waiter to give you a menu with prices.

La Villa Mahana have an annoying habit of only giving men menus with prices and women menus without prices (super annoying).

Related Post: What Is The Traditional Food Of Bora Bora?

Another popular Bora Bora restaurant is Bloody Marys. This restaurant is much more reasonably priced and a great place to spend an evening (and save some money).

Here are the average prices at Bloody Mary’s Bora Bora:

Bora Bora Yacht Club is another one of Bora Bora’s most popular restaurants located in Vaitape.

Here are the average prices at Bora Bora Yacht Club:

This restaurant is overall fairly reasonably priced (for Bora Bora standards) so it’s worth a trip if you love good food.

If you’re staying at a resort that isn’t on the main island then you also need to factor in the cost of your transportation.

The Four Seasons resort doesn’t offer this and will charge you around $37 per person each way.

If you’re staying elsewhere you’ll need to check with your hotel.

There are some budget options where you can get a meal for $10 to $15 per person such as Moi Here restaurant.

You can also grab a large pizza for $15 at Lucky House or some burger and fries at Snack Matira for around $12.

I’d also recommend heading over to the small stands which line Vaitape and Matira Beach such as Roulotte Matira (they have cheeseburgers for $7!).

These stands have loads of cheap food including burgers, pizza, roast chicken, crepes and even some Tahitian style dishes and you can usually get a meal for $10 or less.

These types of eateries are known locally as ‘roulottes’ and usually have some seating areas beside them.

In general, eating at a resort (especially the more luxury ones) costs a lot more than eating out on the main island.

If you plan on eating at one of the restaurants at Bora Bora’s luxury resorts, then here’s what you can expect to pay:

St Regis is without a doubt one of Bora Bora’s most popular resorts.

If you’re staying there, or just want to pop over for a meal, then here’s an overview of the St Regis Bora Bora restaurant prices:

There are actually 4 different restaurants to choose from at St Regis with the Lagoon Restaurant by Jean-Georges being the most pricey.

The Four Seasons is often ranked as Bora Bora’s best resort but…it’s also one of the most expensive.

Here’s what you can expect of the Four Seasons Bora Bora restaurant prices:

The Four Seasons resort has 4 different restaurants to choose from with Arii Moana being the most expensive.

Another one of Bora Bora’s most popular resorts is the Hilton Conrad Bora Bora.

If you’re wanting to dine there then here is the Conrad Bora Bora restaurant prices:

Hilton Conrad Bora Bora has 3 different restaurants to choose from with Iriatai being the most expensive.

To save a bit of money, you can choose to buy some snacks from a local grocery store.

Food is still kinda pricey at grocery stores but you’ll still make a saving if you compare it to a restaurant meal.

Tip: To save money on food in Bora Bora, fill up at the breakfast buffet, grab some snacks for lunch from the grocery store and then eat out for dinner.

Here’s the average food prices in Bora Bora at a grocery store:

Overall the best way to save money at grocery stores in Bora Bora is to buy local brands. Avoid the imported brands as they tend to cost way more.

One of the best places to buy groceries in Bora Bora is at Chin Lee’s Market in Vaitape village.

Here you can find fresh vegetables, fruits, meats, canned food, bread, biscuits and more. It has a huge selection.

Other grocery stores include:

Unfortunately, food can be difficult in Bora Bora if you have special dietary requirements. It can be hard to find good vegan/vegetarian meals as well as halal food in Bora Bora.

Thanks for reading this post on the food prices in Bora Bora which covers everything from restaurant prices, grocery prices and resort prices.

If you need more help costing up your trip then check out my post on how much it costs to visit Bora Bora. It includes a full cost breakdown of a vacation in Bora Bora.