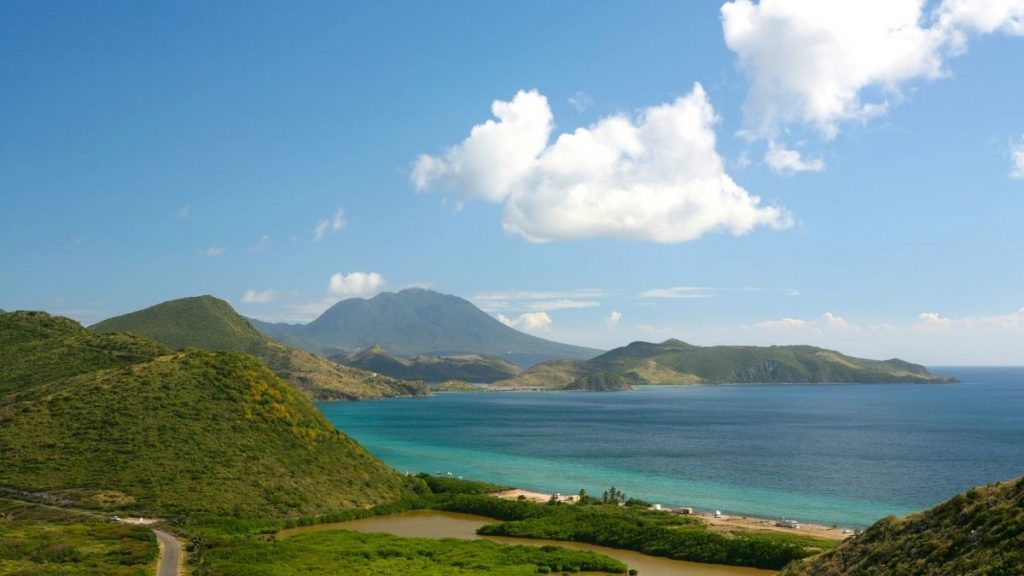 St Kitts and Nevis are beautiful, tropical islands in the Caribbean. If you’re wondering ‘What is St Kitts & Nevis Known For?’ or ‘Why Visit St Kitts & Nevis?” then this post is for you.

This post discusses the reasons why you should visit St Kitts & Nevis and what the islands are known for. It’s got lots of interesting facts and information on the islands which will leave you wanting to visit the islands right away.

St Kitts & Nevis is an island country comprising the 2 islands: St Kitts and Nevis. The island of St Kitts is the larger island where the capital of Basseterre is located. The smaller island of Nevis lies 2 miles to the southeast of St Kitts across a strait called The Narrows.

The official language of St Kitts & Nevis is English. This is due to the long colonial history of the island. The islands were home to both French and English colonies for many years with the island finally gaining independence from the UK in 1983. The people of the islands are known as Kittitian or Nevisian.

So why should you visit St Kitts & Nevis?

As with many Caribbean islands, one of the main reasons to visit St Kitts & Nevis is for its stunning tropical beaches. With soft, golden sand and tranquil waters, you won’t be disappointed.

Some beaches not to miss include Pinney’s Beach, Nevis which features miles and miles of white sand and plenty of places to eat and drink.

Banana Bay will give you incredible views of St Kitts Southern Peninsula and overlooks the Narrows, a 2 mile stretch of water between the islands of St Kitts and Nevis.

Cockleshell Bay stretches along the Narrows itself and is one of the island’s most beautiful beaches with aqua ocean and soft sand. Here you can swim, sunbathe or sip on a delicious cocktail. You often hear live music here too.

If you like palm trees then Dieppe Bay could be the beach for you. This beach features unique black sand and is the point where the Caribbean Sea meets the Atlantic Ocean so the waves crash into each other in opposite directions. Dieppe Bay is protected by a major reef so is the perfect spot for swimming and snorkelling!

Turtle Beach is another fantastic beach and a great place to spot dolphins! This beach is much less developed than other beaches and is much more quiet. You’ll enjoy snorkelling here due to an offshore reef where you’ll be amazed by plenty of colourful fish.

These stunning beaches are one of the things that St Kitts & Nevis is most known for and one of the best reasons to visit.

The Central Reserve Rain Forest covers around 25% of St Kitts and extends across part of the islands from the mountains to the coast. This rainforest has been protected since 1902 so it’s lush, natural and completely intact.

A popular activity on the island is to go trekking into this tropical rainforest to completely get lost in nature and lush forests. Many people visit St Kitts & Nevis for this reason.

This is also one of the best places to see the famous vervet monkeys that roam the islands. These monkeys were brought to the island by the French from Africa during their colonial period and today there are now more of these monkeys on the island than humans!

A great plus for many Caribbean islands is that you can visit at any time of the year and the weather will be fantastic. You can sunbathe on the beach any time of year.

Temperatures range from an average of 25ºC in January (it’s coldest month) and 28ºC in the peak summer months. You can expect a hot and tropical climate pretty much all year round!

It doesn’t rain too often in St Kitts & Nevis but it is rainier at certain points of the year. The driest time of year is from January to April. From May to October, you will sometimes experience rain showers.

It’s also worth noting that St Kitts lies in an area that sometimes experiences tropical hurricanes which are most likely to develop between August and October.

You’ll find dormant volcanoes on St Kitts as the island was actually formed by volcanoes a very long time ago.

The tallest volcano on the island, Mt Liamuiga (3,792ft), last erupted 1,800 years ago. There were reports of possible eruptions in 1692 and in 1843 but these were not verified and remain uncertain.

Today hikers come from all around to reach its summit which is the highest point on the island of St Kitts. The views from the summit are incredible. You can see the whole island, the neighbouring islands of Nevis, Saba, Statia, Antigua, St Barths and much of the Caribbean Sea.

Mt Liamuiga was formerly known as ‘Mount Misery’ however it was renamed to Mount Liamuiga on the day of St Kitts independence from the United Kingdom on 19 September 1983. Lush tropical rainforests can be found in the foothills of the mountain.

Another volcano located here is Nevis Peak which is actually a potentially active volcano located in the centre of Nevis island. It’s not quite as tall as Mt Liamuiga but still reaches an impressive 3,232ft. There have been no eruptions of this volcano since prehistory.

It is possible to hike this volcano but it is much more difficult than Mt Liamuiga and you need to go with a guide. If you do manage to hike to the top, you’ll get fantastic views of the Caribbean Sea, Atlantic Ocean and the surrounding islands. If this isn’t a good enough reason to visit St Kitts & Nevis then I don’t know what is!

St Kitts has a very interesting colonial history having been occupied by both the English and the French with the 2 even occupying it at the same time for a while! St Kitts & Nevis finally gained independence from the UK in 1983.

Before being colonized by Europeans, the islands were home to many natives. Firstly, the Ciboney people lived on the island around 3,000 years ago. This was followed by the Taíno people in 800 AD. Finally at the time of the Spanish arrival on the island, it was the home to the indigenous Island Caribs.

In 1493, Christopher Colombus and the Spaniards arrived on the islands naming St Kitts as San Jorge and Nevis as San Martin. Eventually Nevis was known as Nieves due to the cloud cover resembling snow with the Spanish word ‘nieve’ meaning ‘snow’.

The English arrived on the islands in 1623 and in 1625 the French arrived. By 1627, the English and French had decided to split the island into 3 quarters with the English controlling the middle and the French taking control of the end quarters.

Around this time some of the indigenous Island Caribs started plotting to eliminate the Europeans on the island. This was leaked to the Europeans which ultimately led to a massacre where over 2,000 of the Island Caribs were killed. By 1640, any remaining Island Caribs who were not already slaves were removed and sent to Dominica.

The French and English kept up an uneasy and tense cohabitation of the islands until 1713 when the Treaty of Utrecht was signed in which the French signed over their portion of St Kitts to the British.

St Kitts was once well-known throughout the world as a sugarcane island. The production of sugar began in 1643 on St Kitts and in 1648 on Nevis.

Sugarcane became less profitbale after slavery was abolished as the factories actually had to pay their workers now. A major slump in the sugar industry hit the islands in the 1890s. Conditions were terrible and riots occurred. Eventually, the smaller factories were closed and a large centralised sugar factory was built on St Kitts. This factory became the largest employer on the island.

In 2005, St Kitts officially closed its sugar industry due to huge losses in the industry and cuts in sugar prices over the years. The island’s economic focus has now shifted to tourism.

The Narrows is a strait that separates the islands of St Kitts and Nevis. It is just 2 miles wide.

Every year a race is held to see who can swim between the 2 islands the fastest! The record is 58 minutes and 9 seconds. The race starts off from Oualie Beach on Nevis, heading across the Narrows and finishing at Cockleshell Beach on St Kitts.

St Kitts & Nevis have become well-known for this fun race which attracts people from all over.

The race has drawn a variety of athletes over the years including previous Olympians. You don’t have to be an athlete to take part, anybody is welcome. You can join the ‘assisted’ category which allows the use of fins and snorkels.

If you’re planning on visiting St Kitts & Nevis soon then check out booking.com for a great place to stay. You can also check out Airbnb for amazing prices, hotels and apartments.

St Kitts and Nevis are beautiful islands in the Caribbean and anyone visiting is sure to have a wonderful time.