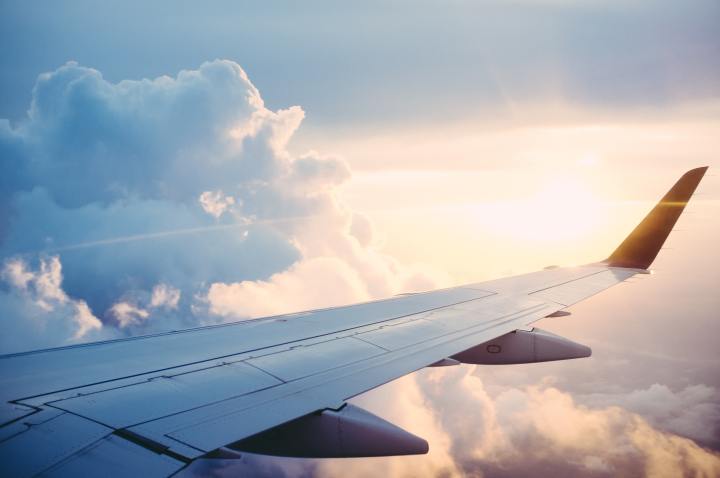 When I was 20 years old I travelled to India on my own to volunteer in a Slum Clinic. This post follows my journey from Birmingham, UK all the way to New Delhi, India with a stopover on the way. It was a super long day and I was travelling for over 20 hours.

The day I’d been waiting for arrived – today I’d be flying to New Delhi, India all on my own!

My parents were away on a trip so I had to order a taxi to take me to the airport. We left home at around 10am and made it to the airport with plenty of time to spare. My boyfriend came with me to wave me off.

My flight to Delhi with Emirates had 1 stop in Dubai and as I checked in my bag, I was told that I wouldn’t need to collect my bag in Dubai – it would go straight onto the next flight and I’d collect it in Delhi. This was pretty handy.

After checking in my bag, we got some food. One pepperoni pizza later, I was leaving my boyfriend and heading to security. That was the last piece of meat I’d be eating for a while. After security, I headed over to our gate where I met up with a girl called Tania who I’d been speaking to online.

We’d found each other on a Facebook page for people going volunteering in India. It was such a lucky coincidence that we were both heading out at the same time for 3 weeks! I’d already booked my flight when we started speaking so she booked the same flight so we could travel together. We didn’t have too long to chat but soon found we had many things in common.

As we boarded the flight, I said goodbye to Tania (as we were seated separately) and we made plans to meet again in 7 hours time in Dubai.

So my mammoth journey began with my first flight from Birmingham, UK to Dubai, UAE – lasting 7 hours. I was actually pretty excited about this stop-over. Even though I wouldn’t be able to leave the airport, I was so excited to get a glimpse of Dubai as I’d always wanted to see it. In my mind, it was the epitome of a glitzy, modern city and I wasn’t disappointed as we flew into the city at midnight and I got to see the most amazing, birds-eye view of a sleepy yet so awake Dubai. The dark sky was illuminated by the flashing lights of cars, the glow of the buildings and the undistinguishable, Burj Khalifa – the tallest building in the world.

I was soon off the plane and through security. It was a fleeting visit – only 3 and a half hours. I connected to the airport WiFi and met up with Tania and we passed the time by getting to know each other. Tania had done a lot of preparation for our trip to India and she had long lists on her phone of all the places she wanted to see. I was delighted to hear about the plethora of activities she had found to keep us occupied for the next 3 weeks.

At around 4am, we left Dubai to embark on the next stage of the journey. My next flight, from Dubai, UAE to New Delhi, India was much shorter – only 3 hours. By this time, I was incredibly tired so I just slept through the whole flight, even missing my complimentary breakfast which I was actually rather annoyed about as I had been looking forward to the Indian style breakfast offered by Emirates. I was quite lucky in the fact that the flight was fairly empty. I had an entire row to myself which I used to stretch my legs out so I could sleep.

We arrived in Delhi at around 9.30am (5am UK time). By now, I’d been travelling for 19 hours and was absolutely exhausted as I’d only slept for 2 hours on the plane, but it didn’t stop there. I still had to make my way out of the airport and all the way to Faridabad.

Faridabad is a city just outside of New Delhi and it was the place I would be calling ‘home’ for the next 3 weeks. I’d be staying with an Indian family and volunteering in a local slum clinic.

After landing, I met up with Tania again and we tried to navigate our way out of the airport but it wasn’t as easy as it seemed. We ended up in various different queues, some right and some wrong. After an hour, we finally made it through immigration.

Something that became apparent to me straight away was how nice the people of India were! The man working at immigration was so kind. He asked about our trip and told us some of the best places to visit in Delhi.

After collecting our bags, we went to buy an Indian SIM card to use in our phones. I’d researched these beforehand and found that the best place to buy the SIM was actually in the airport. As well as the SIM, we also purchased data which turned out to be really helpful throughout the trip.

Next we had to find our driver, who we apparently walked straight past as we left the airport and couldn’t find him for ages! As we walked out of the exit, we were met with a sea of people with names written on cardboard signs. There were hundreds of eyes and suddenly all were on us. I hadn’t anticipated how rare I would be in India but I would experience this a lot during the trip. A white, blonde woman alone in India? It was almost unheard of.

We walked up and down the path around the airport for at least half an hour, reading the cardboard signs numerous times and not seeing our names at all. We were starting to get worried as we had just arrived in India but were already lost! We were alone in an unknown city and there was no driver there for us. We couldn’t even contact him as the airport WiFi wasn’t working and our SIM’s hadn’t been activated yet. Even worse, we didn’t even know the address we were supposed to be staying at.

Relief swept over us as eventually we managed to get some WiFi but it turned out the driver didn’t have WhatsApp so the messages didn’t send. The panic returned as we tried to think of a solution. Tania had an idea – she had an old friend who was currently living in Delhi. We managed to message her and get her to call our driver. Thankfully she did so and told us that the driver was waiting just inside the doors of the airport. We had walked straight past him on our way out of the airport!

She was right. We went back inside and there he was. He’d been waiting there all this time with his cardboard sign saying ‘Tania and Megan’. Once again, the relief returned and we were finally able to leave the airport.

Our driver took us over to his car where we met another volunteer, Tasha. She’d arrived before us and had to wait the whole time whilst we got lost in various places. I felt a little bad that we’d made her wait so long. All 3 of us jumped into the back of the car and started chatting as we rode towards the city.

After a short drive, we stopped to pick up another volunteer called Hayley. As we all started to get to know each other, we were driven about an hour away from the airport into the city of Faridabad where we’d soon meet our new homestay family.