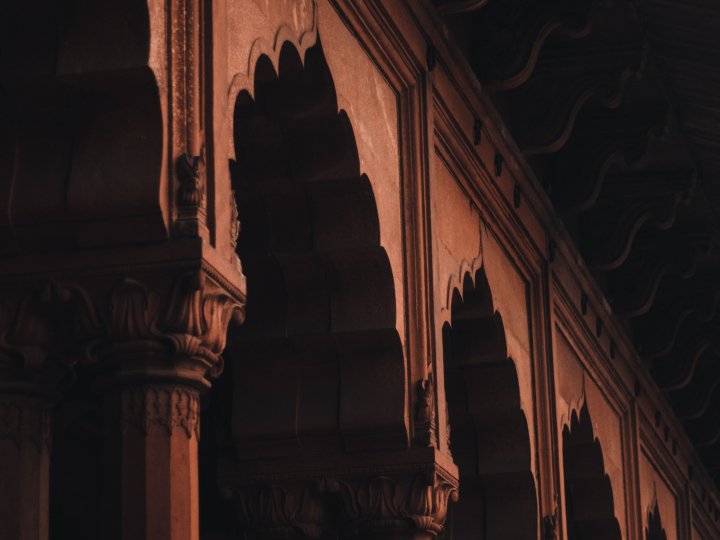 During my 3 week trip to India, I spent a whole day exploring the best that Old Delhi has to offer. From the famous Red Fort to Gandhi’s final resting place and the craziest market I’ve ever seen – read on to find out the best places to go in Old Delhi.

Today was another super busy day of sightseeing in the city of Delhi. Today we would be exploring the sites of Old Delhi with Mohit and Himanshi.

We left our homestay at around 10am in our minibus and drove into the city centre. The streets were swarming with cars and it took ages to get anywhere. We were definitely stood still in traffic jams more often than not but it was all part of the fun. You’d often see motorbikes and people (and even school children) just weaving their way through the stood still traffic, passing by your window, to get to wherever they were going. As always, the air was filled with the constant sound of people honking their car horns.

After finally emerging out of the traffic jams and into the city centre, we arrived at our first destination which was the India Gate. This enormous archway reminded me of the Arc De Triomphe in Paris. The India Gate is actually a war memorial dedicated to the 70,000 British Indian soldiers who died in the First World War and is inscribed with thousands of soldiers names. This statuesque gate stands so tall and is incredible to look at.

It was really busy over by the gate so after we’d seen it, we walked over to the gardens which were very close by. It was much less busy here and felt a lot more breathable. Inside this charming little garden was a few more things to look at such as a fountain and a pool. It was a lot more relaxed but I soon started to attract attention. First a man came over with a professional camera to ask if he could take some photos of me, however this seemed to attract lots of other people who started gathered around wanting photos too. It was a bit overwhelming so we decided to leave. My friends kept joking about how I was being treated like some sort of celebrity so one of my friends decided to pretend to be my bodyguard, moving me away from the crowds and back towards the gate.

We all jumped back onto the minibus and headed over to a Sikh temple in Old Delhi called Gurudwara Bangla Sahib. This turned out to be one of my favourite places that we saw. It was a small bit of tranquil heaven amid a chaotic and boisterous city.

As soon as we arrived we were immediately ushered into the visitors centre. The Sikh temple is open to anyone to visit (you don’t have to be Sikh) and in the visitors centre you can learn more about the Sikh faith. Here, we were also asked to take off our shoes and cover our hair with a bright orange scarf, given to us by the staff. This was seen as respectful due to being in the Sikh temple.

This temple is one of the most prominent Sikh temples in Delhi. It’s an astonishing place as everywhere you look, all you see is pure white marble glistening beautifully in the sunlight. It featured a marble courtyard in front to the building itself which was also made of marble, topped off with a glorious golden dome. It also had an enormous holy pond outside called the Sarovar that was thought to have cleansing powers. You could see people approaching the water, splashing their faces with it and we even saw some people getting in.

During the visit, we also entered the temple itself which was filled with Sikh people who were worshipping. The inside of the temple was very grand – there were so many intricate designs, magnificent statues and detailed inscriptions. After leaving the temple, we took a walk around the Sarovar and just took some time to enjoy the serenity and bliss before heading back out in the crazy city.

We once again got back onto the bus and next headed to the Red Fort. As we pulled up, all we could see was a colossal red wall made from red sandstone – it seemed to be endless and towered over us forcefully. We carried on walking for a while along the wall and eventually came to the Lahori Gate which was the main entrance for visitors.

The Red Fort is a historic fortress in Delhi that was once the main residence of the Mughal Emperors. It was built back in 1648 and still stands tall today. The site itself spans over 200 acres of land and its defensive wall runs for 2.4 kilometres.

As we walked through the gate and into the fort, we were finally able to explore what lied beyond the wall. We were met by immense gardens filled with other interesting buildings and monuments such as the Diwan-i-Aam. This was the inner main court featuring decorative columns and archways.

There was so much to explore so we wandered around for a while marvelling at the intricate Mughal architecture. Again, lots of people were trying to take sneaky photos of me and at one point a guy started following us around quite closely for a while so we started walking faster, eventually running away as we felt quite uneasy. Wherever I went, I seemed to have a small crowd of people surrounding me asking for photos or just sneakily taking them.

Tania and I wandered outside after we’d finished exploring and as we were waiting for the rest of the group, we started chatting to a security guard who was situated just outside the Lahori Gate entrance. He was pretty official looking and looked more like he was in the army than just a security guard (maybe he was, I don’t know), even carrying a gun. It was actually really nice to chat to him, I guess he was interested in us as, even at the main tourist sites in Delhi, you don’t see many other foreigners at all. His English wasn’t the best but good enough for us to understand what he meant. We chatted about the city and what else we should see whilst in Delhi. After a while, another security guard came over to us and asked to take a selfie with me.

Just across the road from the Red Fort is one of Delhi’s oldest and busiest markets – the Chandni Chowk Market. I’d been really excited about going here as I’d heard that it gave a flavour of true Delhi and had a real authentic feel – and I was not disappointed as it was the craziest and busiest place I’ve ever been.

Firstly, to get to the market we had to cross the busiest road ever and I’m not joking. I’ve never seen anything like it! There were hundreds of cars, bikes, buses, motorbikes, rickshaws – all zooming past us at high speeds. On top of that, there were no traffic lights, no zebra crossings and no way of getting across safely. We were all freaking out as it looked so dangerous and near impossible to cross. Mohit, however, seeing un-phased by it and to him, it was just a regular road. With cars darting past us, he just walked out into the road telling us to keep close. As we dodged between the cars hurtling towards us, stopping every few seconds to avoid being squashed by an oncoming bus, we slowly make our way across the road. Mohit made it look so easy, I honestly don’t know how he did it but he managed to get us all across safely and alive.

The market itself was just as busy – the crowds were so thick that it was essentially a sea of people. As you walked down the street, you were pushed up against other people trying to get by. It was hard to get into shops or view stalls as you were just swept away, along with everyone else.

This market was originally built back in the 17th century by a Mughal Emperor and still remains today as one of India’s largest markets. The streets were packed with street vendors, clothing stores, bazaars and street food. The market is well known for its huge variety and authenticity of goods. You can buy anything here from clothes to books to electronics and it is also home to many famous restaurants where you can buy traditional Indian foods such as paratha, fruit chaat and a variety of Indian sweets.

After battling through the crowds, Mohit pulled us into a dress shop where we stayed for a while. It was a wonderful shop – the walls were stacked from floor to ceiling with folded fabrics, all vibrant and vivid colours. There was no space wasted at all. We were all excited to purchase a saree or a lehenga for our upcoming Taj Mahal trip as we all wanted to wear authentic, Indian style clothing.

We all sat down on the floor on cushions and the men who worked in the store began pulling down various fabrics from the shelves with beautiful designs and patterns, wrapping us up in them as we stood on a little stool. I tried on a few different lehengas and eventually settled on a vibrant pink one that was bejewelled with gemstones, flowing down and ending with a blue hem and gold detailing. It also came with a pink scarf and I was so excited to wear it to the Taj Mahal.

Next we were taken to Raj Ghat which is a memorial dedicated to Mahatma Gandhi. The main thing to see here is a black, marble platform filled with vibrant flowers of red and orange, that marks the spot of Gandhi’s cremation in 1948. It is open to the sky and an eternal flame burns at one end in a glass box. This site is surrounded by a small garden.

It was really interesting to see as I’d heard a lot about Gandhi in history lessons back in school. We also happened to arrive at the perfect time, as the sun was just beginning to set so we were able to watch the most beautiful sunset in this little, serene garden. It was so peaceful and not too busy either. There were also a few birds flying around, which wasn’t so good for one of my friends as one of the birds decided to poo on her – luckily she saw the funny side.

After finishing up here, we headed to the mall in Faridabad and later went home at around 9pm. We ate a delicious dinner at our homestay and eventually went to sleep after a tiring day.