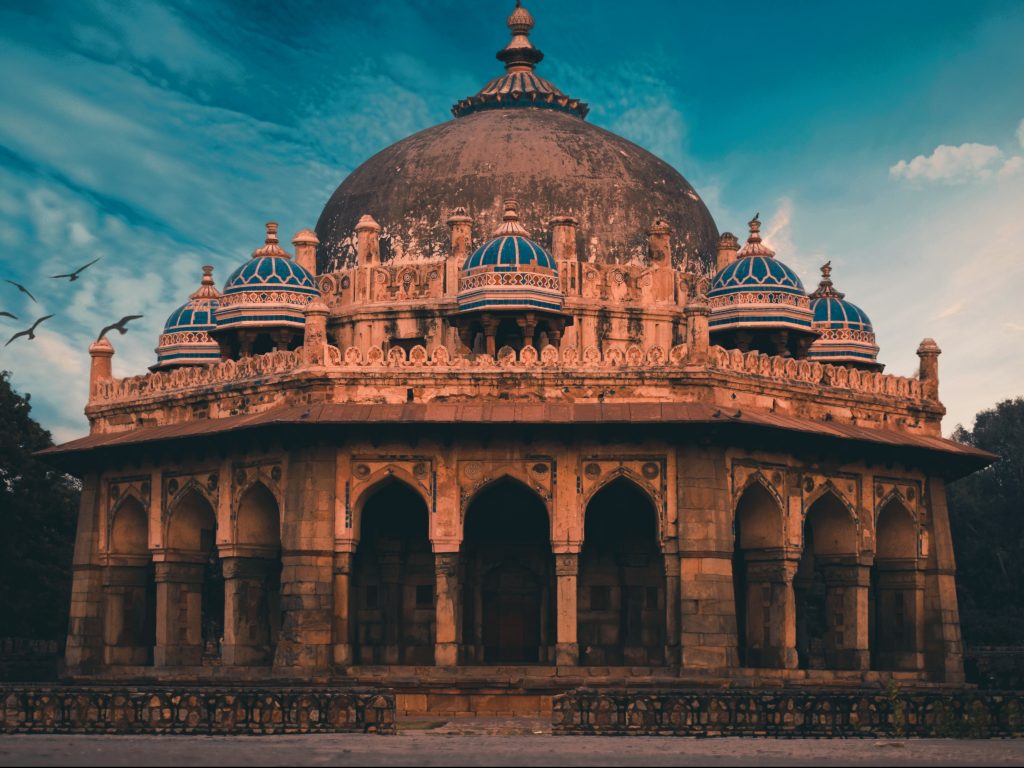 I spent 3 weeks exploring New Delhi, India and had so many amazing adventures. Here are some top picks for if you have 1 day to see the best that New Delhi has to offer. From temples to shopping, there’s so much to do.

Also check out my post for the Top Things To Do In Old Delhi for more inspiration.

Today was my second day in India and day 2 of our orientation week. The plan for today was to head out into New Delhi and see as many of the sights as we could. I was really excited to finally get out and explore!

We had a quick breakfast at our homestay before setting off for the day – it was a savoury pancake type thing and tasted delicious (as did all the food here). We then set off from our new home in a little minibus where we drove around New Delhi to see the famous sights.

The first stop was Qutub Minar. The Qutub complex is a historical site that contains many monuments and buildings that were originally built in the Delhi Sultanate (an Islamic empire based in Delhi between 1206 and 1526). One of the main points of interest is an enormous tower called the Qutub Minar. The site is pretty old and the Qutub Minar was actually completed in 1368! This victory tower was magnificent to look at and as you got up close to it, you realised how tall it actually was (73 metres).

All around this grand tower was many other interesting things to look at, a lot of it in ruins. This included the ruins of a mosque that was originally built after destroying 27 Hindu and Jain temples and the pillars from the original temples were actually used to build the mosque.

One other structure that I found particularly interesting was the Alai Minar. This was originally supposed to be a huge tower, at least twice the size of the Qutub Minar however construction stopped very early on so all that was built was a mound of rubble. As you get up close to a lot of the monuments here, you can see they are decorated with intricate inscriptions.

Our guide around New Delhi was Mohit, a lovely Indian man who told us so many stories of his life in India (some heart-warming and some heartbreaking). One of the first things he told us was that when an Indian person says they’ll be 10 minutes, they usually mean 20 minutes. It seemed to be some sort of joke that everyone was late in India, so when Mohit told us to meet him back at the coach in 1 hour, we arrived 10 minutes late. This was mainly due to the site being so interesting that we wanted to see more of it, but as we arrived back at the coach everyone seemed to be waiting for us so I guess not everyone is always late!

This was my first big public outing in India and as we walked around the sites, lots of people started coming up and asking to take a photo with me. I was getting used to the constant stares but being asked for photos made me feel like some sort of celebrity! As we walked around Qutub Minar, I took a photo with a large family of around 10 people who were all so excited to meet me and later on a man asked if I’d take a photo with his wife and she excitedly put her arm around me for a photo. I’m not sure what it was they found so interesting – probably my blonde hair and blue eyes.

Next we took the coach to Humayun’s tomb, as the name suggests, this is a tomb built for the Mughal emperor named Humayun. It was built by his wife who had been so distraught following his death that she wanted to build the most magnificent memorial for him by the Yamuna River in Delhi.

The tomb itself is a magnificent building, built of red sandstone. It stands in the centre of a spacious garden, dotted with palm trees, fountains and other notable buildings. The gardens were divided up into many sections with pathways connecting them all, you could have spent hours exploring the site.

Mohit told us that his building, completed in 1572, was actually the inspiration behind the Taj Mahal. The more I looked at it, the more I saw the similarities in the designs. The alluring architecture of these buildings was so compelling and I really enjoyed seeing them.

You could also climb up a steep staircase at the foot of the tomb and walk upon the 2nd floor of the building – it was definitely worth the walk as you got an epic view of the surrounding gardens and could see far into the distance. From above, you could see that the gardens were very symmetrical and had been divided into equal squares.

After exploring Humayun’s tomb, we jumped back onto the bus and ate the packed lunch we’d been given in the morning. At our homestay, there was a man that worked there as a cook and he made the most delicious food. Today he prepared us some chapatti wrapped up in foil alongside a delicious curry – I have no idea what was in it, all I know is that it was one of the tastiest things I ate on the trip.

The next stop was something I’d been quite excited about visiting after reading about it online. This was the Lotus Temple. We arrived and parked up the coach in the car park. At this point, we could only see the temple in the distance and had to walk along a lengthy path, leading up to the temple itself.

The Lotus Temple was shaped as the name suggests – like a lotus flower. It was comprised of many colossal marble petals that pointed upwards towards the sky. The building itself was so striking, the way that the petals glimmered in the sunlight was just beautiful. The temple was also surrounded by a number of radiant blue pools.

I also found the concept of the temple to be very intriguing. It is a Baháʼí House of Worship which means that it’s doors are open to anyone of any religion to come and worship. I found this idea to be really progressive and welcoming – the idea that many different people with different beliefs can all come to one place to worship was quite heart-warming.

When we got close to the temple, it loomed over us and once again I was captivated by the sheer enormity of it! We had to take our shoes off as we drew closer and leave them outside. Before entering the temple, we had to queue in single file and wait to enter. The queue wove around one of the blue pools which stood beside the temple itself.

After a short while, we finally entered. It was quiet inside and as people entered they filled up the rows of seats within. We sat for a while inside the temple, soaking up the atmosphere. Most people seemed to be silent, in thought, however one woman sat in the row in front of us decided she wanted to take a photo of me. It was actually quite funny watching her pretending to take a selfie but actually holding her phone to the side, trying to get me in it, no doubt to show her family later. It did feel a little odd.

As we left the temple, again I seemed to be getting a lot of attention. Lot’s of people started taking photos of me and staring. I was getting used to it by now and I did ask Mohit about it when we were waiting for the others to come out of the temple. Mohit said it was because of my blonde hair, he also told me that apparently I was the whitest person in India which made me laugh. He then told me to stand right next to him because nobody would bother me if I stood with him. Unfortunately, he was wrong as 2 minutes later a teenage boy came up to us to ask me to take a photo with him.

After leaving the temple, we were taken to an emporium. I was really impressed when we arrived as it was so luxurious and much posher than I’d expected. They had so many elegant items that were hard to resist – dresses, sarees, lehengas, scarves etc. The store was filled with rich colours and everything was bedazzled with glittering gems and jewels or decorated with intricate designs.

We sat down in the middle of the store on one of the long sofas and the staff began to pull down exquisite materials from the shelves. There seemed to be an endless supply of designs and the shelves were stacked from floor to ceiling with various vivid colours.

After leaving the emporium, we begged Mohit to take us to a mall as we just were not ready to go home yet. He agreed and took us to the Crown Interiors mall, close to our homestay.

I was fascinated by the mall as it was the opposite of what I had expected. It was extremely modern, clean and bright. It felt like I’d just stepped into an American movie and I even started to see chains that I recognised for the first time in India – McDonalds, Domino’s, Dunkin Donuts and more. After seeing the streets of New Delhi and visiting the makeshift, authentic markets that were a bit chaotic, it was really surprising to see an impeccable mall where everything was neatly arranged.

After slurping some drinks and eating some ice cream, we headed home and ate dinner – even after snacking at the mall, there’s always room for curry, right? This time it was chapatti with a butternut squash curry and, as usual, it was totally delicious.

Click here to read about the time I went to an Indian cinema to watch a Bollywood movie completely in Hindi!