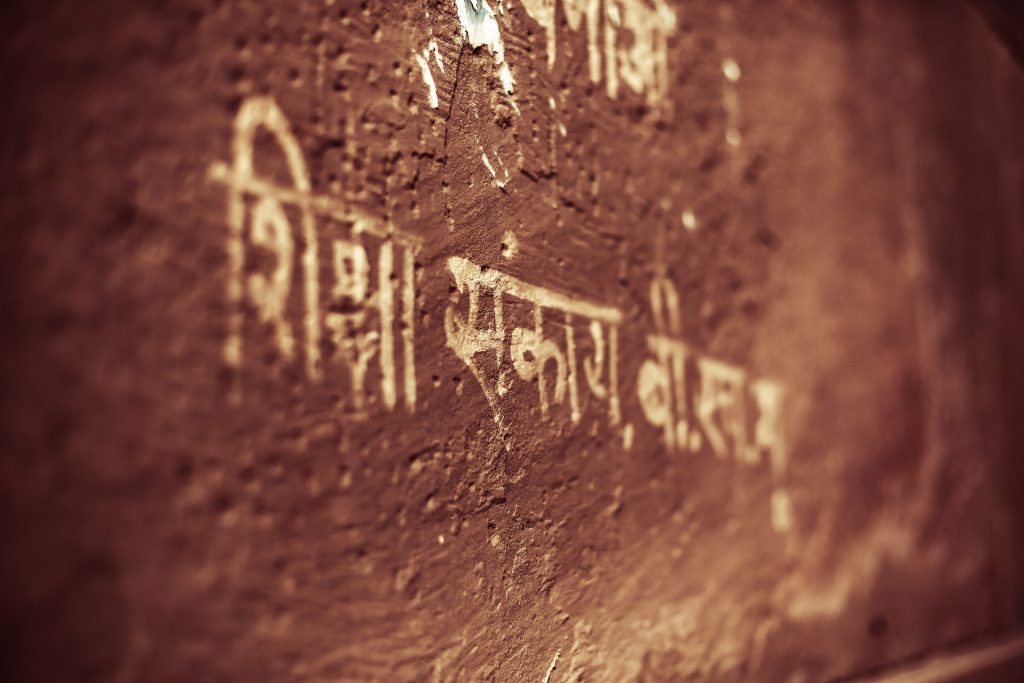 During my trip to India, I really wanted to experience the culture and what better way to do that than head to a cinema in New Delhi and watch a new release Bollywood movie! Here’s what you can expect as a foreigner.

We started the day with another Hindi lesson. It was nice to have a more relaxed day as yesterday we’d spent the whole day exploring the sights of New Delhi which was quite tiring (click here to read about it).

I was a little late waking up this morning due to being so exhausted from the previous day. I woke to find only myself and Tania left in the dormitory, everyone else was already upstairs ready to begin the lesson! We quickly grabbed some breakfast and took it with us to the lesson.

Today we learnt a lot of vocabulary that would help us on our trip. Similar to our first lesson, the words were written up on a white board in front of us by Mohit and then we all copied them down into our notebooks. Mohit would then run through the pronunciation.

We learnt A LOT of words today on topics such as family, food, adjectives, directions, animals, colours and even basic sentences. There was so much content and it was difficult to take it all in but I did remember a few words that did come in handy later on. The colours were especially useful when shopping.

Here’s a few words that I learnt:

She is beautiful – Yha sunder hai

Mohit also showed us how to write our names in the Hindi script which was really cool and looked beautiful. Here is mine:

After finishing our Hindi lesson, we took a short break and had some lunch. Then Mohit and Himanshi took us to the cinema at the local mall to see a Bollywood movie.

Himanshi also worked for IVHQ alongside Mohit and she had taken quite a liking to me. Over the course of the trip, we became pretty good friends and she quickly nicknamed me her Barbie doll because she was fascinated by my blonde hair. She was super kind to us and there were some amusing moments during the trip when we were out and about with her and she’d try to call us all back and all you’d hear would be a distant “BARBIE!”. This was her first group of volunteers so she was just as excited as us about the whole experience.

We all walked down to the Crown Plaza mall in Faridabad which was only a 5 minute walk from our homestay. It was a typical, modern mall filled with shops and up on the top floor was an inviting little cinema. The movie we came to see was called Shubh Mangal Savdhan and was a new release. The film was completely in Hindi – I was hoping that there would be English subtitles but as we were in an Indian cinema in New Delhi watching a Hindi film, why would there be?

I sat next to Himanshi and and as the film was completely in Hindi, I had no clue what they were saying. Despite this, it was interesting to see that I picked up a lot just from context so I was largely able to follow the main plot. I could tell that it was a comedy because every now and again the room burst into laughter and Himanshi often jumped up out of her seat in a fit of giggles. She sometimes explained the jokes to me after she’d calmed herself down from giggling.

Even though I didn’t understand a lot of it, I did really enjoy the movie and it was great to experience something that is so famous in Indian culture – it was an authentic Bollywood experience.

After the movie, we wandered around the mall for a while browsing the shops and eventually decided to head home. We then started looking for a rickshaw and soon found a driver that was happy to take us. After our experience last time, where 7 of us piled into one rickshaw and broke it (click here to read about it), we decided it would be better to split up and take 2 this time.

The driver of our rickshaw didn’t speak much English and it took ages to explain our destination to him. In the end, we just told him to follow the other rickshaw with the rest of the group in it.

I really enjoyed riding the rickshaws whilst in India – it was such an unusual and different way to travel compared to what I was used to. It was especially unusual to be on a motorway, with cars and motorbikes close to your side and zooming past you, whilst being in an open sided vehicle with no seat belts. It was so exciting though and a fun way to travel.

We ended up getting a bit lost on the way home as Delhi is such a huge city and we didn’t really know the area well yet. We kept seeing different buildings that we thought we recognised, so changed direction then realised that we actually didn’t know where we were. It did confuse the driver a bit. In the end, when we could tell we were close to home, we just got out and walked the last little bit.

Click here to find out what happened on our day exploring Old Delhi. Hint: it was crazy.