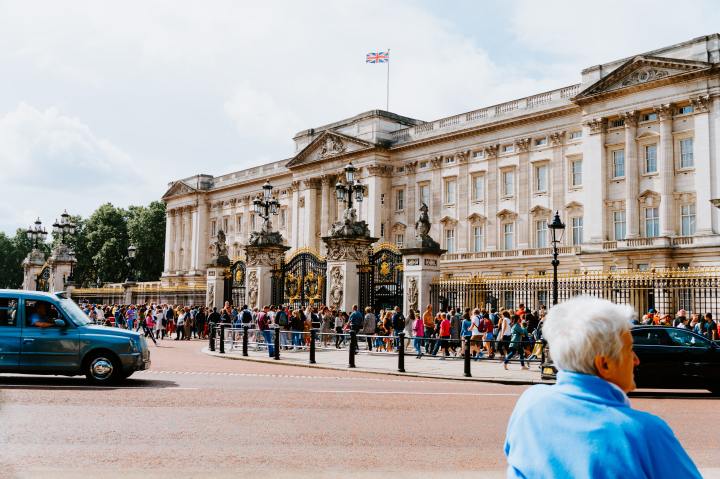 London is world-famous for it’s royal family. Chances are if you are visiting London, you’ll want to see some of it’s royal history.

This list will discuss the top 13 royal places to visit in London – it includes iconic palaces as well as places you won’t have heard of. Perfect for your trip to London.

I couldn’t start this list off with anything other than Buckingham Palace. The home of the Queen of England herself. This palace has actually been the home of the British monarch since the reign of Queen Victoria so it is pretty iconic.

Located right in the heart of London, it’s an unmissable site and something you just have to see if you’re in London. A fantastic time to go would be during the Changing of the Guard ceremony – this is a major ceremony that occurs daily from April to July and every other day the rest of the year.

The palace itself isn’t open to the public all year round. The palace’s state rooms are open to the public for 10 weeks over the summer so if you’re visiting around this time, you could get a glimpse at some very famous rooms such as the throne room. It is definitely one of the most royal places to visit in London.

Most people just enjoy the views of Buckingham Palace from the Victoria Memorial which is located just in front. This is absolutely free to do.

If you do want to view the palace state rooms during the summer, an adult ticket costs £26.50. You can check the latest information and opening times on their website here.

This historic castle, located on the banks of the River Thames, has served many purposes over the years. It was actually founded right back in 1066 so has some pretty impressive history to it.

It has served as a royal residence, a prison, barracks and an armory. It has held some very famous prisoners over the years including Elizabeth I, and Guy Fawkes.

Today, this 900-year-old castle and fortress is home to the crown jewels – these are used during the coronation of a monarch and other royal ceremonies.

It’s a great place to visit as you can explore the tower and learn about it’s fascinating history and stories. You can also see the famous ravens (it is believed that if they are absent, the kingdom will fall) as well as the iconic crown jewels.

A ticket for an adult costs £28.90. You can check the latest information and opening times on their website here.

Kensington Palace is a royal residence, currently home to the Duke and Duchess of Cambridge (Prince William and Kate) and their children. It is also the palace in which Queen Victoria grew up and was at one time the home of Princess Diana.

Historic parts of Kensington Palace are open to the public so you can go inside and explore the palace. You’ll see the rooms in which Queen Victoria spent her time growing up, pieces from the Queen’s and Princess Diana’s wardrobe and they also have some fun interactive and digital experiences.

A ticket for an adult costs £17.50. You can check the latest information and opening times on their website here.

Hampton Court Palace is a fascinating Tudor royal palace that is most famous for being the home of Henry VIII (and his 6 wives – 2 of which were beheaded by Henry). It was built in 1515 and gifted to the King in 1529.

The Palace hasn’t been used as a royal residence for a long time (since the 18th century). In recent years, it has been used for various purposes including a film location – it even served as a location in the 2015 live-action remake of Cinderella.

It is open to the public where visitors can explore the famous Tudor King’s home, see the haunted gallery, the great hall and the Tudor kitchens. You learn lots about the king’s public and private lives – it is all very fascinating.

A ticket for an adult costs £24.50. You can check the latest information and opening times on their website here.

Westminster Abbey is a gothic abbey located in Westminster, London. Whilst it isn’t a palace, it has served many royal purposes over the years.

It is the traditional place of coronation for British monarchs and has hosted many royal weddings dating back to 1066. Many monarchs are also buried here.

The most recent royal wedding hosted here was in 2011 between Prince William and Kate Middleton.

It is open to visitors so you can step inside this gothic church with over 1000 years of history, seeing it for yourself.

A ticket for an adult costs £24. You can check the latest information and opening times on their website here.

Windsor Castle is another royal residence, located just outside of London (a 40-minute train ride away).

It has a lot of famous royal history and today is the favourite weekend home of the current Queen of England. She also hosts a lot of royal events and state occasions here.

This magnificent castle is actually the oldest and largest occupied castle in the world and many parts of the Castle are open to the public including the precincts, the State Apartments, Queen Mary’s famous doll house and St George’s Chapel.

It was founded back in the 11th century by William the Conqueror and has been the home to 39 monarchs over it’s history. It was also the location of the royal wedding between Prince Harry and Meghan Markle.

A ticket for an adult costs £23.50. You can check the latest information and opening times on their website here.

Kew Palace is a British royal palace located in Kew Gardens on the banks of the River Thames. This royal palace is not as well known as many of the others on this list. It was the home of King George III and Queen Charlotte.

It is open to the public and you can explore Queen Charlotte’s Cottage and admire the incredible view from the Great Pagoda. This is one of the more unknown royal places to visit in London.

Entry to Kew Palace is included in the price of a ticket for Kew Gardens. A ticket for an adult costs £18. You can check the latest information and opening times on their website here.

St James’s Park is a royal park located in Westminster, London. The park is bounded by Buckingham Palace which can be seen from within the park.

Over the years, it has served many royal purposes, once being a royal hunting ground. Today it is a perfectly maintained park with pristine flower beds, lawns and greenery. It looks just like a royal garden.

The park has a small lake with 2 islands as well as a resident colony of pelicans that have been a feature of the park since 1664 when they were originally gifted to the King by a Russian Ambassador.

You can also wander across The Blue Bridge which crosses the lake, giving fantastic views of the trees and greenery in the park and the iconic Buckingham Palace. It is a beautiful walking spot – truly magical.

The Banqueting House, in Whitehall, London, is the only remaining relic of the Palace of Whitehall which was the main residence of British monarchs in the 16th & 17th centuries.

This royal masterpiece was originally built by King Henry VIII and has hosted many historical events, including the execution of King Charles I.

This building has some very famous and exquisite ceilings, painted with beautiful decorations. It is a fantastic piece of royal history to explore.

A ticket for an adult costs £7.50. You can check the latest information and opening times on their website here.

St James’s Palace, in Pall Mall, is one of the most senior royal palaces in the United Kingdom. It was built by Henry VIII and so is of tudor style.

It was at one time the residence of the monarch, since then it has been used for many formal occasions and today the palace houses a number of official offices and collections. The palace is also used for official receptions, such as for visiting heads of state or royal-related charities.

As this is still a working palace and home to some minor royals, this palace is not open to the public so you won’t be able to enter.

You can view it from the outside and see the Household Cavalry. If you go at the right time, you can also see the Changing of The Guard depart from the palace.

You can see St James Palace from the outside for free.

Clarence House stands right beside St James’s Palace and is an aristocratic townhouse. Built between 1825 and 1827, today it is the official London residence of The Prince of Wales (Prince Charles) who is the current heir to the British throne.

The house is mainly used by The Prince of Wales and his wife, The Duchess of Cornwall, for receptions and to receive official visitors to the UK.

Clarence House is open to the public during August. Visitors are given a tour of 5 rooms on the ground floor where you will see many of the Queen’s artwork and furniture (as she lived there before she moved to Buckingham Palace).

A ticket for an adult costs £11.30. You can check the latest information and opening times on their website here.

Winchester Palace was a 12th century townhouse and palace that was once home to the Bishops of Winchester who traditionally served as the king’s royal treasurer. Located on modern-day Clink Street in London, all that is left are the remains of the great hall.

It was used as a home for hundreds of years and was at one time one of the most important buildings in London. Unfortunately, it was mostly destroyed by a fire in 1814.

If you visit today, you will be able to see the medieval architecture of the remaining walls of the Great Hall, which includes the magnificent rose window on the western gable.

Free – you can see it for free from the pavement on Clink Street.

Queen’s House in Greenwich is a former royal residence that was built between 1616 and 1635. It was built originally for Anne of Denmark who was the queen of King James I.

It was supposedly built as a gift from the king to apologise to his wife after swearing in front of her after she had accidentally killed one of his favourite dogs during a hunt.

It is one of the most important buildings in British architectural history and is much lesser known than the other places on this list. It is considered to be an architectural masterpiece and was the first ‘classical’ style building to be built in the UK.

Today this building is home to an internationally renowned art collection which is open to the public. It was used by the royal family until 1805. It is definitely one of the best royal places to visit in London.

Free – one of the best things about this house is that it is free to visit.

Thanks for reading this list of the top royal places to visit in London. How many have you visited?