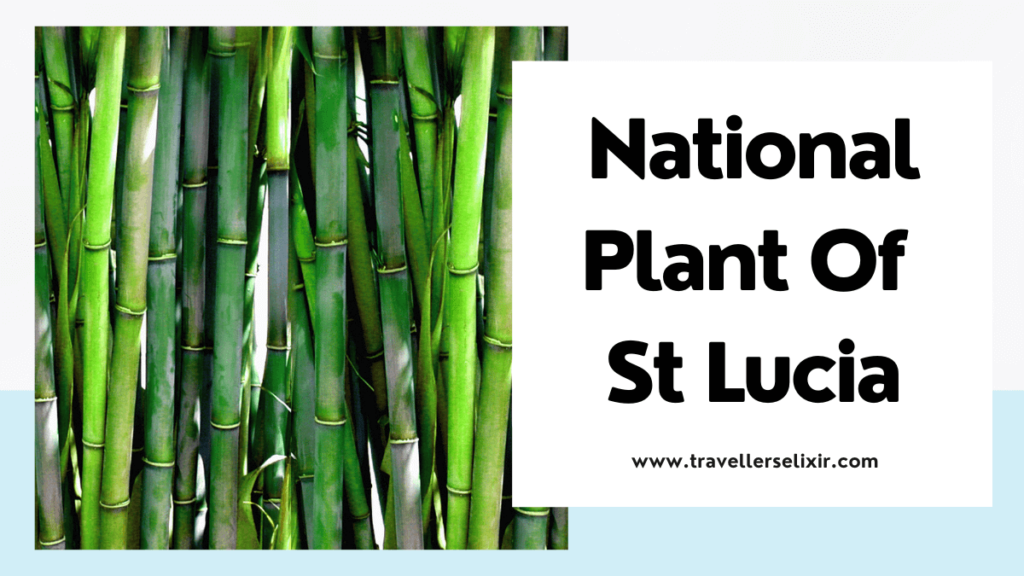 Most countries have a national plant, tree and flower but what is St Lucia’s?

I was wondering the same thing but couldn’t find much information on it so I’ve done some research and put together this handy guide.

The national plant of St Lucia is bamboo.

There is actually a variety of different bamboo plants with over 1,462 current species.

Bamboo is most commonly found growing in the rainforest of St Lucia and is actually technically considered a type of grass.

By this definition, bamboo is the largest grass in the world.

It’s actually the world’s fastest growing plant and can grow up to 36 inches in one day and can reach up to 60 ft tall.

Although the bamboo plant can live for over 120 years, they don’t grow taller than the height they reach after the first year.

In St Lucia, bamboo is used to make baskets, furniture, flooring, cooking utensils and ornaments. Due to its durability and cylindrical shape, it can also be used for piping!

Some local fishermen even use it to make fish pots to store their catch.

Bamboo is actually ideal for climate change mitigation due to its rapid growth and the fact that it produces 30% more oxygen compared to a hardwood forest and it absorbs more carbon dioxide from the air than any other plant.

Additionally, bamboo is able to tolerate some of the world’s most extreme conditions. In fact, it was the only plant to survive the Hiroshima atomic disaster in Japan in 1945.

It’s not hard to see why St Lucia chose the magnificent bamboo as their national plant.

St Lucia has two official national flowers. These are the rose and the marguerite flowers which are the symbols of the two flower societies in St Lucia.

These two flowers were chosen as they are the names of two hugely important flower festivals in St Lucia.

These flower festivals are held by two separate flower societies who are each dedicated to singing about and praising their respective flower.

The St Lucian people involved in these festivals usually head to church in the morning then celebrate in the streets and eat lots of tasty food.

Here’s what you can expect from the La Marguerite flower festival in St Lucia:

Roses are also the national flower of the US and they are often associated with love. This is because in Ancient Greece, the rose was associated with the goddess of love, Aphrodite.

There are over 300 different species of rose native to several different continents including Asia, Europe, Africa and North America.

Roses come in pretty much every different color including red, pink, yellow, orange, white and even blue. The only color rose that doesn’t exist is black.

Rose thorns actually serve a very important purpose. They are shaped like a hook and help the rose to attach onto other plants and grow over them.

A typical rose plant will live for around 35 years but they can live much longer. The oldest living rose is currently 1,000 years old and it grows along the Hildesheim Cathedral in Germany.

The rose is actually one of the world’s oldest flowers. Rose fossils have been found which date back to over 35 million years ago.

Back in 2006, a rose breeder spent 15 years breeding a very rare rose variety which was named ‘Juliet’. This was then sold for $15.8 million.

Wow, who knew roses could be worth so much!?

The Marguerite is a type of daisy flower that is originally native to the Canary Islands.

Marguerites generally grow to a height between 1 ft and 3.3 ft.

The national tree of St Lucia is the calabash tree.

Calabash trees typically grow between 20 ft  and 40 ft tall and are characterized by their long, twisted branches which hang out horizontally and have small flowers on the tip.

The branches have little secondary branching and provide a place for the calabash fruit to hang.

The calabash ‘fruit’ is actually a hard circular nut which is able to grow up to 20 inches in diameter.

These round fruits (well, actually nuts) produced by the tree take 6 months to ripen and are not edible to humans (horses can eat them though). They do have tons of other uses.

The shell of this nut is used in St Lucia for storage and is often turned into water containers, bowls, cups and is even used to make musical instruments.

The calabash tree has flowers that grow on the end of the branches however they only bloom at night and appear wilted by morning.

These flowers are actually pollinated by bats during the night.

Interestingly, the calabash tree isn’t native to St Lucia but it was designated as the national tree of St Lucia in 1979 when they gained independence from the United Kingdom.

There’s so much more to St Lucia than meets the eye. If you’ve not visited yet then what are you waiting for?

Find out why St Lucia is worth visiting in my guide.