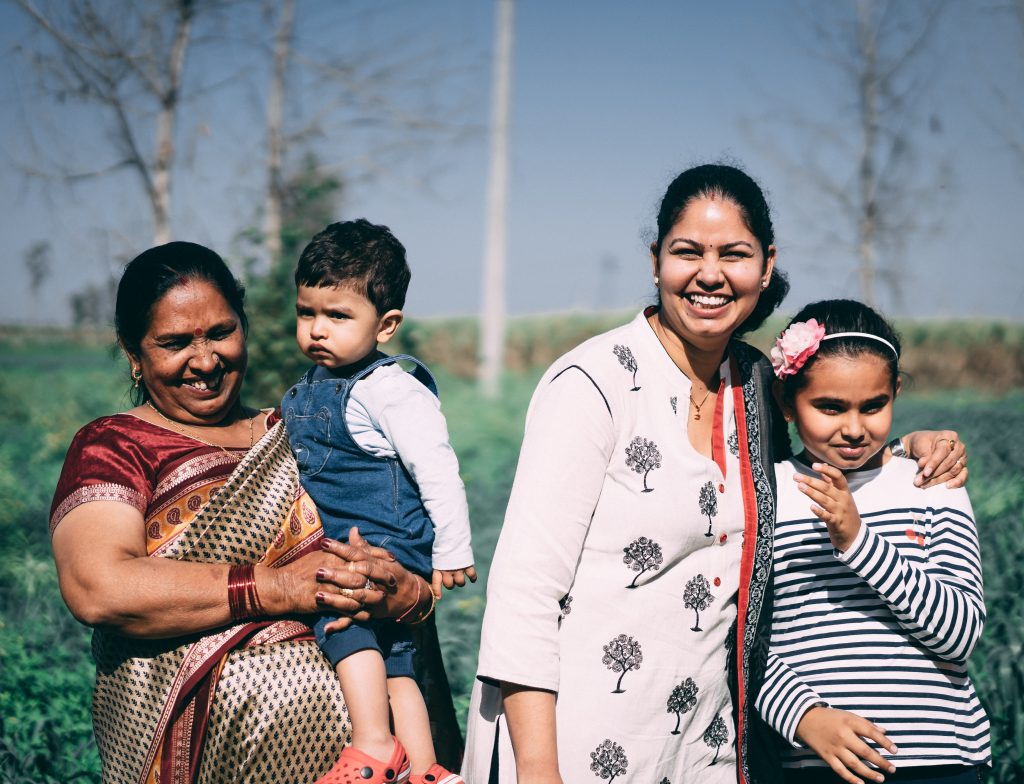 Whilst volunteering and travelling in India, I stayed with a local Indian family who lived in Faridabad, New Delhi. I was super nervous to meet them and didn’t know what to expect however they were really friendly and welcomed me into the family straight away, making me feel like I was at home and also taught me a lot about Indian culture.

Travelling To Our New Home

I was now in a car with 3 other volunteers heading to our new home. We would be staying with an Indian family in the city of Faridabad, just outside of New Delhi, India.

I remember the exact moment that I first stepped out of the car and was hit with real India. We were not far from our destination when our driver wanted to stop by at a shop to get some flowers for our homestay mother as it was her birthday. We pulled up on a busy street and as he got out he told us to stay in the car and that he wouldn’t be long.

After he left and the engine was switched off, it got very hot and sweaty in the car. We couldn’t take it any longer so we decided to step outside for just a minute to cool down. Upon stepping out of the car, we soon realised that it wasn’t much cooler out here, it was even hotter!

As soon as we stepped outside of the car, eyes were on us instantly. People stopped and stared at the sight of us. A blonde, white girl in India? They were so curious and people just stared continuously until we got back into the car. I understood that these people meant no harm, they were just intrigued.

After the driver returned, he took us to our new home in Faridabad. We would all be staying together along with a few other volunteers. We entered a nice looking neighbourhood and pulled up outside a house.

After lugging our cases to the front door, we were met by a kind woman called Sarita and her 10-year-old daughter, Gulika. They were so welcoming and I instantly felt at home. Gulika was very chatty and I was so impressed with how good she was at speaking English. She was only 10 years old but spoke English just as good as me and even better than some people I knew at home who were English!

One thing I’d been quite nervous about was the thought of creepy crawlies and my biggest fear was spiders so I asked Gulika if they got many spiders here and thankfully she said no.

“No, we don’t get many spiders here, but we do get rats, mice, lizards and cockroaches. They jump out when you’re not expecting it!”

I think this was an attempt to scare us a little as Gulika was laughing as she said it, however luckily I’m not scared of anything but spiders. I might have felt a bit uneasy as the sight of a cockroach but I was quick to learn that mice and rats didn’t really bother me. This was good because one day in our first week, a mouse ran into our dormitory and decided to sleep under our beds!

It was interesting to chat to Gulika and learn more about her family. As we walked through the house, we met the other people who lived there. Sarita’s husband was nicknamed Rocky, he didn’t really speak much but he was kind and often dropped us off at various places in his car. There was also a grandmother and grandfather living in the house. They didn’t speak English so we tended to just awkwardly smile at them whenever we bumped into them around the house.

Gulika told us more about her family. She told us about her brother who was studying abroad in America. It soon became apparent to us that we were living in a very nice neighbourhood in the city where some of the more wealthy families lived.

Following greetings, Sarita showed us to our dormitory. We were met by 6 beds all laid out in a row. The beds were all pushed close together, touching each other. It was almost like one long bed that spanned the entire room. If I rolled over from my bed, I would roll onto the next! It was quite a basic room – there was no storage, no tables, no chairs. The paint on the walls was peeling off but it didn’t matter – we had everything we needed.

Sarita also showed us to the 3rd floor where we ate our first home-cooked Indian meal. This was something I’d been waiting for. Indian food is my favourite type of food and one of the things I’d been most excited about when coming here was the food! Sarita’s family were a vegetarian family (as are many Indian families). In fact, one of the first questions I was asked by Gulika when I arrived was “veggie?”.

My first meal was white rice, some chapatti and 2 different curries. I tried a chickpea curry and a potato one. They were both delicious and I felt extremely satisfied.

Being Welcomed Into The Family

After eating, Gulika and Sarita ushered us into the living room where they continued to welcome us and make us feel like part of the family. First, they gave each of us a necklace made out of beautiful, orange flowers. They must have been freshly picked as you could still smell the scent. Next, they gave each of us a bindi – this is the red dot that Hindus often wear on their foreheads. It felt so nice to take part in their traditions and I really enjoyed learning more about their culture during the trip.

The 3rd floor of their house also had a balcony so we sat up there for a while and chatted to some of the other volunteers who had already arrived. Most people came from different countries – Canada, Australia, South Korea, Mexico, USA, Romania. I met so many different people from different places throughout the trip and it was one of the things I loved the most about it. We stayed up there for a while and started planning a weekend trip to Jaipur.

Later that evening, we had dinner. It was another exciting Indian meal. This time a spicy potato dish with rice, chapatti and curry sauce. It was divine. I knew I’d sleep well tonight, dreaming about all the delicious food I’d be eating on this trip.

One thing that I am absolutely against is jet lag. I won’t stand for it and have a great way to overcome it. As everyone else went to take naps (as we’d all had long journeys), I decided to stay up as I knew I’d beat the jet lag if I stayed awake until night time. By now, I’d been awake for over 24 hours and by the time I went to bed that evening, I’d been up for 36 hours and it’s safe to say I was exhausted. However, I had no jet lag the next day!