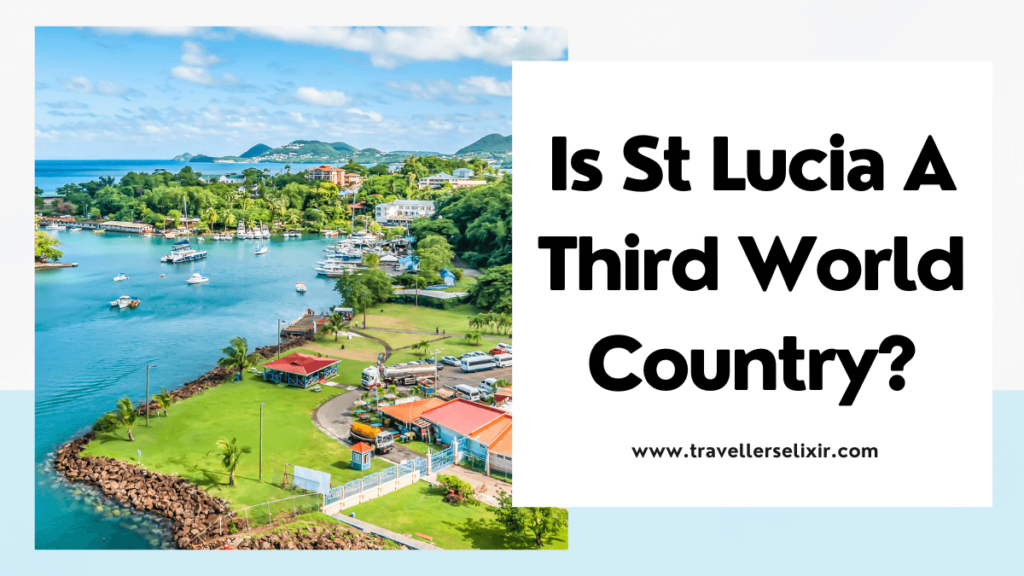 Wondering if St Lucia is a third world country? You’re not the only one.

This post explains if St Lucia is considered a third world country, if it’s rich or poor and why.

According to the World Economic Outlook Database created by the International Monetary Fund, St Lucia is a developing country.

‘Developing country’ is a newer and more appropriate term for lower income countries that has replaced the term ‘third world country’.

Based on this, St Lucia could be considered a third world country.

The term ‘third world country’ doesn’t have an exact definition and has changed meaning over the years.

This term was first introduced during the Cold War in 1952 to define countries that were politically neutral.

Here’s what the official definition was:

As you can see, the original usage of the term ‘third world country’ was political rather than economic.

For example, at the time countries like Switzerland, Sweden, Finland and Austria were all considered ‘third world’ due to their political neutrality.

Under today’s definition, these countries would be far too prosperous to be considered ‘third world’ and actually rank as some of the most developed countries in the world.

After the fall of the Soviet Union in the 1990s (and the end of the Cold War), the term started to be used to describe less industrialized and more economically poor countries.

Today, the term ‘third world country’ tends to refer to countries that are underdeveloped or are still developing.

As a whole, third world countries are economically weak countries that have poor living standards and high mortality rates.

It’s worth noting that today ‘third world country’ is considered by some people to be a derogatory and offensive term so it’s better to use the term ‘developing country’ instead.

Is St Lucia a Developed Country?

Although St Lucia is still defined as a developing country, it is one of the more developed countries in this category.

Let’s take a look at the Human Development Index (HDI) which is a statistic developed by the United Nations.

The HDI gives a value for a country’s social and economic development between 0 and 1. It looks at things like years of schooling, average life expectancy, average annual income etc.

To put this into context:

The average score for developing countries was 0.68.

At 0.71, this means that St Lucia was above this average so it is more developed than the average developing country.

The United Nations also has a list of the ‘Least Developed Nations’ which are extremely low income countries that need international support in order to develop.

These countries are also sometimes referred to as ‘fourth world’ countries.

St Lucia does not appear on this list which shows that it isn’t an extremely poor country.

Although St Lucia’s HDI score, GDP and average yearly income is high for a developing country, they are still disadvantaged for several reasons.

Here’s why St Lucia is still considered a developing or ‘third world’ country:

Although still a developing country, St Lucia is definitely developing in the right direction.

In recent years, they have largely reduced their reliance on the banana trade and now have a thriving tourism industry which is only getting bigger.

In fact, St Lucia is one of the world’s most popular honeymoon destinations.

St Lucia’s economic growth in recent years is largely due to its thriving tourism industry and offshore banking.

Is St Lucia Poor or Rich?

As a whole, St Lucia is neither rich nor poor however they are one of the most prosperous countries in the Eastern Caribbean.

Approximately 20% of St Lucia’s population live in poverty which, compared to the world average, isn’t that bad.

St Lucia’s poverty rate has been steadily dropping over the last two decades.

The country itself has high public debt and their economy is hugely vulnerable.

Tourism actually accounts for 65% of their GDP which means that they’re at a disadvantage when tourism is down.

For example, tourism declined after the 2008 financial crisis and during the Covid-19 pandemic.

Thanks for reading this post on if St Lucia is a third world country.

St Lucia could be considered a ‘third world country’ by modern standards however this definitely shouldn’t put you off from visiting as St Lucia is one of the world’s best honeymoon locations.