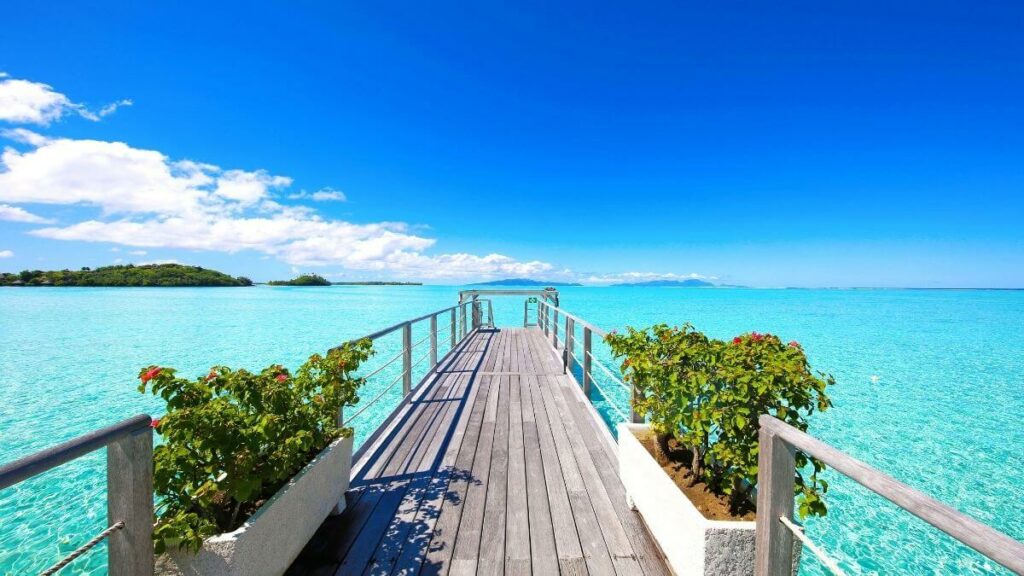 Each year more and more people look to visit this island paradise but where is Bora Bora? Is Bora Bora in the Bahamas?

In this post we’ll debunk the geography myths about Bora Bora to help you plan your trip.

Is Bora Bora in the Bahamas?

The short answer is no, Bora Bora is not in the Bahamas.

In fact, Bora Bora is not near to the Bahamas at all and it isn’t even in the Caribbean.

While Bora Bora is a small group of islands in the South Pacific Ocean, the Bahamas is a chain of islands located in the Atlantic Ocean close to the Caribbean Sea.

Take a look at the map below to see how far apart Bora Bora and the Bahamas are:

How Long Does It Take To Get From The Bahamas To Bora Bora?

Bora Bora is not near the Bahamas at all. In fact, they are actually located on completely different continents.

The Bahamas forms part of North America whereas Bora Bora is part of the Oceania continent.

Because of this, it’s a long flight from the Bahamas to Bora Bora.

The fastest direct flight from the Bahamas to Bora Bora is 11 hours and 18 minutes!

Not sure where to vacation? Check out my comparison guide Bora Bora vs the Bahamas to help you decide.

The short answer is that Bora Bora is part of French Polynesia, a country that is an overseas collectivity of France.

There’s a bit more to it than that though…

It is still, however, considered a division of France.

💡Did you know? France has influenced many things in French Polynesia including their food! Find out what type of food they eat in Bora Bora.

Now you know where Bora Bora is, why should you visit? What is Bora Bora known for?

You can swim with sharks

Yep, you read that right. Bora Bora is one of the only places in the world where you can swim with sharks.

Don’t worry it’s not dangerous as the sharks that live there are not an aggressive species.

The water in Bora Bora is so warm and so clear which makes it the most ideal place to see sharks.

Check out my guide on swimming with sharks in Bora Bora for more info.

There are no crowds

One thing that draws visitors to Bora Bora is that it’s pretty quiet and you never experience big crowds.

In fact, Bora Bora receives the same amount of visitors in one year as Hawaii does in one week!

Choosing between Bora Bora and Hawaii? Check out my comparison guide Bora Bora vs Hawaii.

Bora Bora is often considered to be one of the most beautiful places in the whole world.

Another major draw of Bora Bora is that it’s very unspoilt and undeveloped.

There aren’t huge crowds of tourists and no high rise buildings. It’s truly an untouched paradise with clean water and pristine beaches.

Not everyone goes here

The island is quite isolated so it’s long and expensive to get there. This means that few people ever get to experience this island paradise.

You’ll feel like you’re part of an exclusive group of travelers who have been somewhere that few others have.

Thanks for reading this post on if Bora Bora is in the Bahamas.

Hopefully you now know a little bit more about Bora Bora, where it is and why you should visit.

If you interested in visiting then you may find these posts helpful: