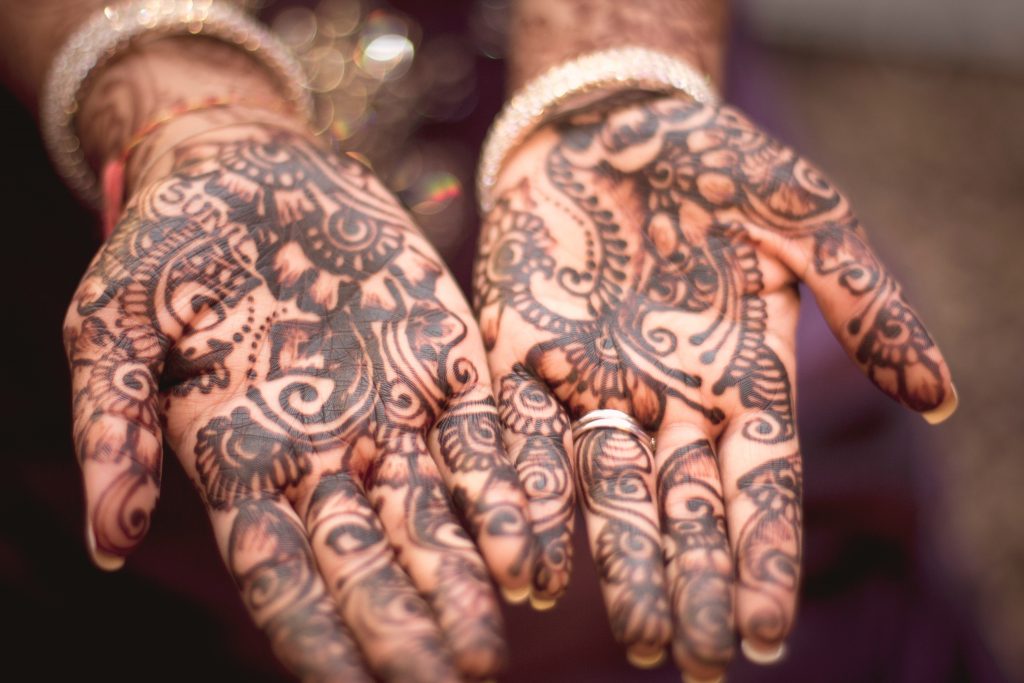 On my first day in India I headed out into the city to see what Delhi was really like. I got beautiful henna at a local market and later headed, for the first time, to a night market! It was a crazy day and involved breaking down in a rickshaw!

This afternoon, we decided that we’d go out into Faridabad to explore the area that we’d be living in. I was so excited to finally see more of India after being inside all morning. Unfortunately, I hadn’t been able to exchange any money yet (as I’d brought English money) so I didn’t have any rupees to spend yet. Despite this, I still enjoyed looking in the shops and at the market stalls.

We saw some beautiful Indian style dresses in the windows of clothing stores – the colours, the designs and the embellishments were all so beautiful.

As we browsed the stalls, we noticed quite a few were doing henna. I’d always loved the look of henna but never tried it before. When one of the other volunteers suggested we got it, I was delighted. The stall we went to had a large book of designs to choose from. There were about 3 men who worked there so we took it in turns to get our henna done. I picked a swirly, floral design. It covered our fingers, hands and a bit of the arm and looked so pretty when it was finished. For a while, we had to be very careful not to smudge it and just allow it to dry. Later on, the henna paste would fall off leaving a brown stain on the skin which lasts for a while.

I was amazed at how fast they drew the designs onto our skin and even with the speed, every line was just flawless. They seemed to just know the designs by heart.

After getting the henna, we slowly made our way back to our new home. The streets in India are really busy and it can be so difficult to cross the road. The roads were just so hectic and chaotic, like nothing I’d seen before. The people here drive so fast and they don’t keep to the lanes – they don’t seem to stop at all. Over the course of the trip, I came to realise that everyone in India seems to drive this way.

Another thing I noticed is that drivers in India just beep their car horn at everything. I’ve never heard so many car horns in my life! In England, it’s quite rare to hear a car horn and if you do it’s because something serious has happened. But here, you beep the horn for everything. Overtaking? HONK. Turning? HONK. Stuck in traffic? HONK. Just driving forward? HONK. The honks are just endless and it’s all you hear when you step out into the street.

Going To A Night Market

After somehow making it across several busy roads, we arrived home and ate a delicious Indian dinner. After dinner, we headed out to a night market. Earlier in the day, we had asked Sarita where the best market close to here was and she told us about the night market. They hold this every night until around 9/10pm. Apparently, the markets are a lot more active in the evening. This makes a lot of sense as it gets so hot here in the day that it’s much more comfortable to shop in the evenings. I really came to understand why as most days on my trip the temperature was around 36ºC (96ºF)!

At around 7pm, Rocky (Sarita’s husband) drove around 7 of us over to the night market in Faridabad. He dropped us off close to the market and pointed out where we should go. As soon as we turned the corner onto a long street, we were hit with bright colours, loud noises and an overwhelming amount of people. There was something for every sense!

Unfortunately for me, I didn’t have any rupees and there was nowhere close by where I could exchange my money so I had to endure walking around and browsing whilst knowing I couldn’t purchase anything.

The street itself was fairly narrow but so busy! It was absolutely packed with people walking up and down and there were constantly people driving past and forcing their way through the sea of people on rickshaws or motorbikes. You knew you had to move out of the way as a motorbike would appear behind you and just honk its horn at you until you moved. It was so different to anything I’d ever experienced.

As we walked down the street, people were fascinated by us. There were constantly at least 20 eyes on us. At first, it felt a little intimidating and I felt weird to be stared at so much. However, I realised how different I looked compared to what these people were used to and understood that they were merely curious.

Getting Home (And Breaking Down In A Rickshaw)

After walking around for a couple of hours, the shops began to close and we decided to return home. One of my new friends had gotten some henna at the market (as she hadn’t been with us earlier) and she’d accidentally rubbed her hand on my bag whilst the henna was still wet so we returned home with brown, smudged bags and dodgy henna.

We’d been told by Sarita to get a rickshaw home. We hadn’t ridden on one of these yet and I was quite excited to try one. We walked around some dark streets for a while searching for one. It was a little bit scary as the roads surrounding the market were so dark however we soon found a driver.

Although this rickshaw was only built for 5 people, he was more than happy to take all 7 of us in one. We had to sit on top of each other to fit inside and I was sat on one of my new friend’s knees, definitely a good way to make friends. It was an uncomfortable ride and I constantly thought that I might fall out onto the road but I enjoyed every second of it. We all thought it was hilarious that we were bumping up and down Delhi on top of each other in a tiny, wobbly rickshaw.

It was a bumpy ride and I had to keep hanging onto the side of the rickshaw to avoid falling out. After a while, the rickshaw started to lose speed and we were going extremely slow, probably because there were so many of us and we were too heavy. At one point, you could have overtaken us by walking past! As we drove further, the rickshaw got slower and slower until it finally came to a stop. The driver got out and tried to get it to go but it just wouldn’t move with all of us in it – it had broken down!

By now, we were only about 5 minutes away from home so we decided to just pay him and walk the rest of the way. It was really dark by now but the streets were still so chaotic and busy. It was lit up by the lights from the cars and motorbikes.

We finally made it home and headed to bed to get some rest after an interesting first day in India.

Click here to hear about my day sightseeing in New Delhi.