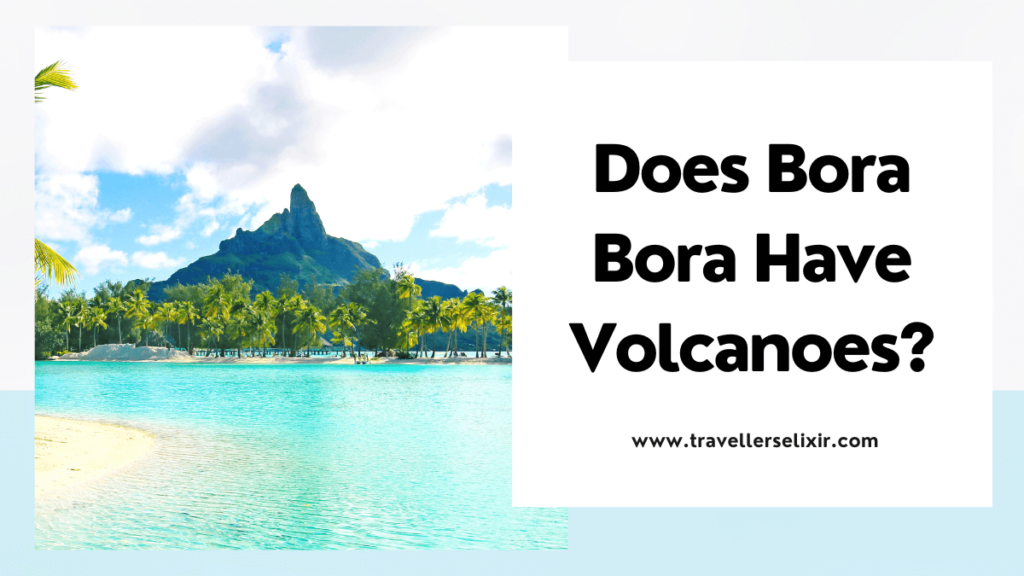 If you’re wondering ‘is Bora Bora a volcanic island?’ then this post is for you.

This post all about Bora Bora volcanoes discusses if Bora Bora has volcanoes, when they last erupted and the history of Bora Bora.

Does Bora Bora Have Volcanoes?

The volcano in Bora Bora is called Mount Otemanu and stands tall in the center of the island, surrounded by Bora Bora’s famous blue lagoon.

Mount Otemanu is 727 meters tall (2,385ft) making it the highest point on the island. This volcano also has a second, lower peak named Mount Pahia which is 658 meters tall (2,159ft).

Did you know that you can actually hike Mount Otemanu? Check out my complete guide to hiking Mount Otemanu for more information.

How Many Volcanoes Does Bora Bora Have?

Bora Bora has just one volcano called Mount Otemanu. This volcano is extinct and also has a second lower peak called Mount Pahia.

Check out Mount Otemanu in the video below:

Bora Bora’s last volcano eruption is estimated to have occurred over 3 million years ago.

The lush green peak that remains is just the remnant of an ancient volcano which hasn’t been active for millions of years.

Natural disasters are extremely rare in Bora Bora and very unlikely to happen.

The only natural disaster that poses much of a threat is hurricanes however these are also super rare. Learn more about hurricane season in Bora Bora.

How Was Bora Bora Formed?

Bora Bora itself was formed from erupting volcanoes around 7 million years ago.

In fact, the island’s name of Bora Bora actually means ‘first born’ in the Tahitian language.

This is due to the fact that Tahitians believe it was one of the first islands to be created in the area.

💡Did you know? The Tahitian spelling of Bora Bora is actually ‘Pora Pora’ as the letter ‘B’ doesn’t exist in the Tahitian language.

After the island was first created, it was uninhabited for many years until a group of Polynesian settlers arrived on the island in the 3rd century.

It’s thought that these settlers likely arrived from Tonga but there’s no concrete evidence to support this.

This group is believed to be the first ever people to set foot on the island.

They initially named the island Vava’u which supports the theory that the island was settled by Tongan people as Vava’u is also the name of an island group in Tonga.

Eventually this name was changed to Pora Pora.

The name Bora Bora first came into use in 1769 when explorer Captain Cook arrived on the island for the first time.

Bora Bora is one of 14 islands that make up the Society Islands which are part of French Polynesia.

Bora Bora lies around 260km northwest of Tahiti which is the largest and main island in French Polynesia.

Check out Bora Bora’s location in the map below:

Bora Bora consists of one main island which is surrounded by several small motus and a turquoise blue lagoon.

The lagoon is fringed by an abundance of healthy coral reefs which provide a home to a multitude of tropical fish species, rays and sharks.

The presence of coral reefs is actually one of the main reasons why the water in Bora Bora is so clear.

Thanks for reading this post which answers the question: does Bora Bora have volcanoes?

Hopefully now you know a little bit more about Bora Bora’s geography, how it was formed and how volcanoes have played a huge part in the island’s history.